In 2011, that one word caught Laila Sakr’s attention as she surveyed millions of Twitter postings in real time. It surged like a pulse as tweets streamed out of Libya in the throes of what would later be called the Arab Spring. Within hours of the word flashing through her data stream, a 42-year dictatorship crumbled before the world’s eyes.

For Sakr, a Ph.D. candidate in the USC School of Cinematic Arts’ Media Arts + Practice program, it was a wake-up call underlining just how much political and cultural dialogue was taking place online — and how crucial it was to preserve and study it.

Sakr was already developing an archive of Arabic-language social media at the time — a project that has since evolved in its complexity and output. That archive, R-Shief, has become a living history of the voice on the street. Since the project started in 2008, it has captured social media from throughout the Middle East, including Turkey, Gaza and even some non-Middle Eastern countries like Brazil.

A voice for the voiceless

Sakr has continued to develop new tools to collect, sort and analyze that data. As a media artist who goes by the name VJ Um Amel, she has also produced data visualizations, art and video works from the content she’s collected.

For the disenfranchised, outlets like Twitter can be a great equalizer, providing a voice to the voiceless. It’s also a place where disparate groups make contact, Sakr said, noting that recent protestors in Ferguson received advice from Palestinians in Gaza about teargas. A more lighthearted example hails back to the 2011 protests over collective bargaining in Wisconsin when word spread on social media that supporters were ordering pizzas to feed the protestors. Some of the calls came from as far away as Egypt. 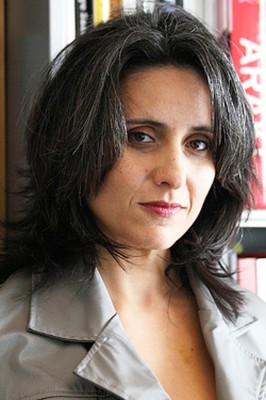 Sakr suggested that all students learn to study social media, the same way they already study and cite newspaper and journal articles. And if you are studying social movements online, she argues, then you need to understand what’s happening in the Middle East.

Much of the social mobilization in the region has to do with the legacy of colonialism and what Columbia University Professor Timothy Mitchell calls “carbon democracies” — states created because of their oil resources — which have created unstable and corrupt institutions. The entire region now has an accessible way to react to those institutions, and they’re not holding back.

Sakr added that social media provides and encourages an “emotional register.” Users are expected to perform, goad and be inflammatory in front of online audiences; it is part of the reason people join online debates in the first place. The growth of image-based platforms like Instagram has also transformed the media landscape, spreading images of violence or dissent that create a visceral immediacy.

R-Shief’s early detection of the fall of Tripoli earned accolades from the U.S. State Department and has been used by the U.S. Embassy in Islamabad to measure public opinion on drones. But Sakr’s ambitions for the archive lie in research and education.

In a post-course era, where learning spaces are moving online and connecting a global body of students, digital literacy is critical. Tools like R-Shief provide students and scholars alike a way to tap into “unofficial” dialogue and analyze the words, images and sentiment pouring out of new social movements. It has become the next political battleground as groups like the Islamic State develop sophisticated communications networks to influence their audiences, Sakr added.

Sakr eventually envisions a community of researchers conducting their own studies with R-Shief’s data. But to do that will require rethinking the way we teach: What will be the standards for documenting a tweet? What will be the Modern Language Association manual for social media content? How do you think critically about analytics?

R-Shief’s data provokes challenging questions at a time when the classroom is evolving. That hasn’t stopped Sakr from trying to answer them: She recently partnered with Towson University’s Kimberly Katz to teach a course on research and the Arab Spring, using R-Shief as a primary source.

“I think right now there’s a panic about education and digital technology,” Sakr said. “I think there’s room for this new pedagogical perspective to help out.”

As part of its emphasis on participatory culture, USC’s Annenberg Innovation Lab has developed a project that offers real-time analysis on topics that thrive via social media.

The Egyptian revolution began on Facebook with a call to protest in Cairo’s Tahrir Square. Protesters used Twitter to maneuver around police and reach the area. People arrived at the location expecting to see a few hundred like-minded individuals. Instead, they found a few hundred-thousand.