Hands pressed inside the pockets of a pair of well-traveled jeans, Kamaria DeLaForce is a tough-skinned girl with the edge of a J.D. Salinger character. She loves video games, zombies and post-apocalyptic scenarios. But she also plays the flute, sings alto in the chorus and is passionate about social justice.

The most noticeable of her traits is how non-judgmental she is about the world. She considers herself an introvert for whom it seems imagining is a natural activity, like walking. The mind is her home, a home both more permanent and more useful than the succession of stopovers she has had since leaving Georgia at age 8.

Driving to the Atlanta airport, the 19-year-old is ready to start her freshman year at USC. Through the passenger window she watches the sun set like an orange veil over Georgia. Two horses race in a field and a faraway look crosses her face.

DeLaForce has a complicated relationship with horses.

As DeLaForce was starting elementary school, her mother, a law student at the University of Georgia, gave up law to pursue a childhood dream of becoming a thoroughbred racehorse trainer. DeLaForce and her single mother chased horses from Louisville to Seattle, relying on the kindness of strangers and living on the outskirts of big cities.

“It seemed like we were moving every other week. Moving houses, moving schools, new teachers to face, new halls to navigate,” she remembered. Pursuing her mother’s dream was a journey rife with comedy and drama, occasional villains, unlikely heroes and a series of near-fatal encounters with horses. “I was attacked by a horse. Twice,” she laughed.

Moving around so often, it was second nature to build up a protective wall.

“People pronounced my name like a vocal aria, or a geometrical area. It’s actually Kah mah REE ah, from Swahili. It means ‘bright as the moon,’” DeLaForce said.

But the endless instability had a profound effect. In eighth grade, DeLaForce was diagnosed with depression.

In her sophomore year, they moved to a trailer in Kentucky where their host turned off the electricity in the dead of winter to save money. “I could see my breath when I went to bed,” DeLaForce remembered. Her depression worsened and she left high school. A year passed before she could muster the courage to return to school and chase her own dreams again. 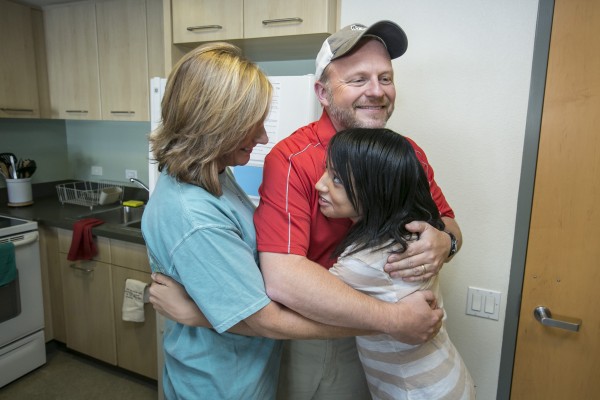 A turning point came when she said goodbye to her mother and set out on her own back to Georgia to live with old family friends. She found a mentor and a friend in her high school counselor, Michael Kulp, who saw her potential. DeLaForce set her sights on USC, and Kulp and his wife offered their support to make the young woman’s dream possible.

When DeLaForce graduated with the Class of 2014 at age 19, she had been in six different high schools and was legally homeless.

She also had an acceptance letter to USC.

The Kulps flew with her to Los Angeles to help her settle into Webb Tower on Move-In Day. She’s still trying to process her new beginning. “I never thought I could do it,” she said.

She joins the ranks of Trojans this fall to study business and computer science. Her dream is to start her own game design company one day. “I want to put my own direction into what I’m doing and bring social justice issues into video games,” she said, “to create characters and storylines that people aren’t used to.”

She has already targeted a list of campus organizations like USC eSports and the LGBT Resource Center and has been accepted as a Trojan Guardian Scholar — a program that provides support to current and former foster youth. At USC, Kamaria DeLaForce finally has found a home, she said.

“It will be the first time in my life when I will stay in one place for four years.”

The class of 2018 jumps into Trojan life with week-long festivities.

Once homeless, freshman now dreams of a future in game design