USC freshman Newal Osman wraps a colorful hijab on her head, steps back and considers her reflection in the mirror. She likes what she sees. “Hijab goes beyond the head scarf,” she said. “It’s your whole body attire, a symbol of modesty that doesn’t veil your identity.”

She recites Asr, the Islamic afternoon prayer, then darts off to the Rose Bowl to experience “On The Run,” Beyoncé and Jay Z’s national concert tour.

“I respect Beyoncé for her sacrifice for her family and her willingness to give to others,” Osman said.

Osman’s family story reads like a classic American novel. Her mother came from Sudan, her father from Eritrea. They met in the airport while moving between connecting flights and looking for directions. They took a risk and fell in love, worked at several gas stations together then drifted apart in the great centrifugal swirl of American culture. The father was still present, supporting Osman and her sister, but the heaviest burden fell on her mother, who did everything in her power to get her daughters a good education.

Seeing my mom struggle alone was hard. She didn’t want to expose her girls to hardship.

Osman’s mother worked extra jobs to pay for private Islamic schools where her daughter learned Arabic. From her grandmother Fatima, Osman learned Tigre, a Sudanese tribal dialect. Her mother’s faith was the cement that held them together and cultivated in her a culture of giving. “I saw the sacrifices my mother made so that I can be happy and I realized happiness doesn’t come from what I get, but from what I give,” she said. “So I wanted to give more.”

When the family moved to Berkeley, California, Osman found her identity as a community organizer. She created her own high school organization, The Giving Back Club, which is still active today. She raised money for clean water and food for victims of famine in Somalia and for survivors of Hurricane Sandy and Typhoon Rammasu in the Philippines. She forged a partnership with Pennies for Patients to find a cure for leukemia. 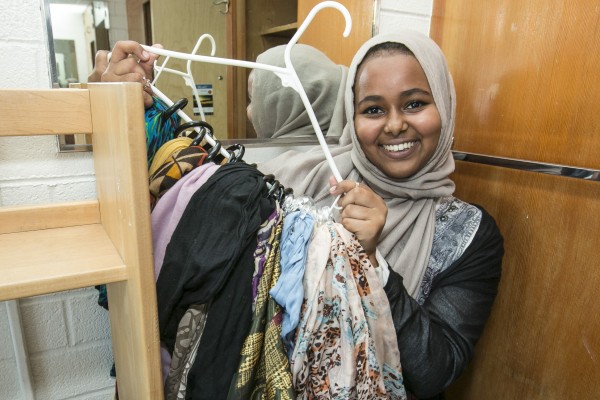 Her resume would make her an excellent candidate for a peacekeeping mission in today’s hot zones, but Osman dreams of becoming a pediatrician. “Making something that was bad go away for a child… It wouldn’t be a job.”

She enters USC as a biological sciences major through Questbridge, which connects the highest-achieving, lowest-income students to the best universities.

When she wraps herself in cardinal and gold this fall, Osman will take on a new identity – that of a USC Trojan. She plans to enroll in Problems Without Passports at the USC Dornsife College of Letters, Arts and Sciences, which offers courses that combine problem-based learning research exercises with study in a foreign country.

With a passport to the world, and support from USC, Osman will doubtlessly see her mother’s legacy be focused and enriched. “I don’t want USC to be a gated community,” she said. “I want to use all the resources I have to help others in our community.”

From cancer research to comics, this freshman fuses fun with diligence

Danyal Brink is a chemistry major and an artist, a committed student and avid athlete.

Freshman draws from her Islamic faith to give from her heart