In an oversized white lab coat, khakis, polo shirt and gloves, Danyal Brink looks like a kid in an adult world.

At age 17, he’s delighted to be turned loose with electrodes and magnets and cylinders and spectroscopes for the summer to work on a famous research project at Memorial Sloan Kettering Cancer Center in New York City. He watches a pair of lively mice and records their activity, and then takes a break. He opens his sketchbook and goes to work on his latest personal experiment — a comic featuring cyborg-mice performing heroic exploits in a galactic maze.

At the end of his shift in the world’s oldest and largest private cancer center, he turns his mice sketches over to a group of former classmates who’ve started collecting his artwork.

When asked if his artistic side is the truest side of himself, he replies wryly by quoting Pliny, in Latin: “There’s truth in children, wine and anger.”

The USC Dornsife chemistry major, who just arrived at USC from Mineola, New York, to start his freshman year, has learned firsthand about embracing different aspects of life. 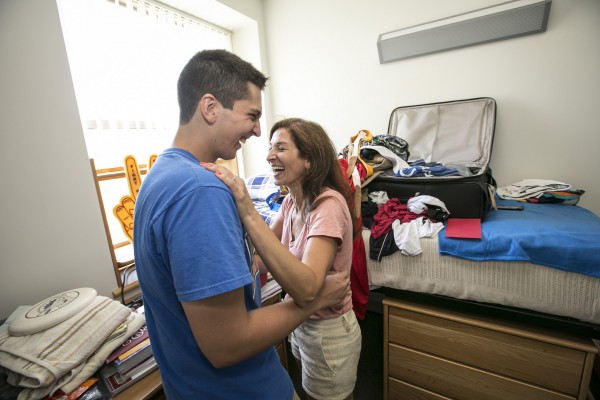 Danyal Brink and his mother, Deniz Dishman, share a laugh while Brink moves in to his USC room. (Photo/David Sprague)

Brink calls himself a member of “the 50 percent club” – a club consisting of all the children of divorce in America. He shuttled between two homes and two opposing philosophies for most of his adolescent life. His father, a retired New York Police Department detective, urged him to “do whatever your heart desires.” His mother, a nurse anesthetist, had a more serious, intellectual approach: “Do things the right way.”

“Mom hung out with doctors and emphasized manners and study habits,” Brink said. “Dad emphasized the fun, easy way of life.” Despite this potentially combustive upbringing, Brink doesn’t see the two sides in conflict. “I fused what had been two distinct personalities into one.”

Moving from the research lab to the heart of care

This process of fusion began to characterize everything Brink did. Take his summer research internship: He wanted to experience much more than a lab at the cancer center, so he rotated as a patient escort volunteer, seeing firsthand the marks that cancer etched on people’s faces. He connected with them on a personal level. “For the 10-to-15 minute ride, transporting them from ward to ward, I heard their stories and listened to their advice. What impacted me the most was that every one of these people, although they were in a dark place, were never really angry. There was an inexplicable joy on their faces and for those 10 to 15 minutes they focused entirely on me. It was a humbling experience,” he said.

When time came for Brink to apply to college, “it was time to be truthful,” he recalls. “You know, every parent wants you to go to the college they think you belong to. When I toured USC with my mom, I had that feeling that I belong here. And she saw that.”

USC interests him because it was the perfect place for fusion. Brink, a former competitive rifle shooter, baseball and hockey player, is looking to join intramural sports and absorb USC’s vibrant social life while broadening his intellectual horizons. He’ll balance intensive chemistry classes with a course on the history of California this semester.

He doesn’t yet know where chemistry will take him, but part of him will always remain with the kindred spirits at Memorial Sloan Kettering Cancer Center. “I want a close personal outreach to the people nearest to me,” he said. “I want to affect one person. Not necessarily global.

“Big doesn’t have to be large.”

From cancer research to comics, this freshman fuses fun with diligence