Smoothing a hand over the comforter and propping up a few pillows, Shermayne Hughes stood back. The bed was made. Her only child was officially moved into her new home at Fluor Tower.

Don’t get her wrong. Hughes is ecstatic for Shernae and “very proud. Very, very proud.” But like many parents interviewed on Move-in Day on Aug. 20, she needed time to adjust to her child moving away. As USC freshman Shernae Hughes’ father put it, “We’ve had her around for 18 years, so it’s tough.”

Heartbreak coupled with much joy were evident during Welcome Week when the 1,792 incoming freshmen and transfer students at the USC Dornsife College of Letters, Arts and Sciences began pouring into campus.

At the parents’ event, Kay noted that USC Dornsife received nearly 26,000 freshmen applicants this academic year, the highest ever. He emphasized the myriad overseas studies and hands-on experiential learning programs USC Dornsife has to offer. He pointed out the networking opportunities.

“We embrace you and welcome you,” Kay told parents. “You are part of our family, the Trojan Family.”

On Aug. 21, the new students attended a lunch event in the Ronald Tutor Campus Center, where they were greeted by USC Dornsife vice deans, students and staff. At the event, they had the opportunity to speak with academic advisers and learn about research opportunities, majors and minors, overseas studies, and other programs, clubs and academic organizations at USC Dornsife. They ate Pink’s Hot Dogs and won a few bicycles from a raffle.

Shernae Hughes was one of these students swept up in the festivities. Already, she has the academic lingo down. The freshman from Rancho Cucamonga specifically sought an “interdisciplinary” major and will study political economy. She said she was drawn to USC Dornsife for its offerings of diverse areas of studies. She herself has disparate interests: government, economy, history and mathematics were her some of her favorite subjects in high school.

Her father, Nathan Hughes, a retired AT&T employee, got Hughes interested in politics.

“My dad and I would always watch the news and would argue back and forth about different issues,” Hughes said. “I like to think critically about subjects.”

A serious-minded student, Hughes envisions devoting her career to education reform. She pointed out large disparities in educational resources and opportunities in California and elsewhere.

“Students typically get good educations based on where they’re located,” she said. “Go to school in South Central and you may not get books. Go to school in Beverly Hills and you take home iPads. I want to fight for educational equal opportunity.”

But at the moment, Hughes was still figuring out where to store all the snacks she brought. Between her and her roommate, Jessica Wynn, an incoming psychology freshman at USC Dornsife, they seemed to have all the necessities of dorm life. Large carton of instant ramen noodle cups. Check. Carton of bottled cranberry juice. Check. Mrs. Fields cookies. Check. First aid kit. Check.

Wynn’s mother and little sister had traveled from their home in Washington, D.C., to help her move in.

“Can you put my makeup in the drawers?” Wynn asked her sister, Jada Combs, who happily complied. While 16-year-old Combs sorted out the lipstick and mascara, she said she was feeling “half happy and half sad” about this turning point in her sister’s life.

“It’s stiff competition to get in,” Kyle acknowledged, noting that her daughter had a GPA of 4.17 and was on the baseball team in high school. “She’s worked hard for this.”

Stopping to reflect, then turning to Hughes’ mother, she added: “I already cried before you got here.” 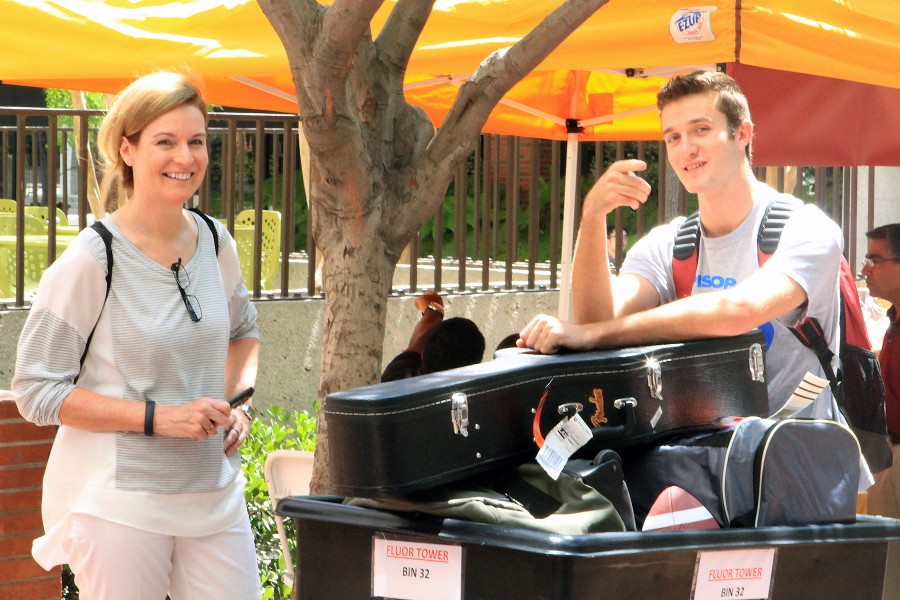 Then there was Karyn Ovelmen, who held her iPhone, snapping a few photos of her son as he rolled a large bin toward an elevator at Fluor Tower.

Moving from Houston, Sean Ovelmen is a biology major at USC Dornsife. But he and his family have lived in so many places — from Switzerland to Florida and Arizona — he said he feels like a citizen of the world. Never having lived in California, he was excited for the new experience.

He was attracted to the Department of Biological Sciences at USC Dornsife and said when he visited campus, “I fell in love with the place.”

In between meeting new friends, Ovelmen rattled off the contents of his bin.