Spawned from discussions with Mexico’s National Institute of Geriatrics (INGer) about shared research interests, the Edward R. Roybal Institute on Aging at the USC School of Social Work conceived the idea of organizing an event that would foster greater dialogue about social networks and the transformation of social and health services from a global perspective.

The idea came to fruition at the International Workshop on Social Support for Older Adults, which was held over two days in Mexico City and brought together scholars from the United States, Mexico and China. The event identified potential areas of research collaboration to advance knowledge and practice through more effective coordination of formal services to support systems of the aging. 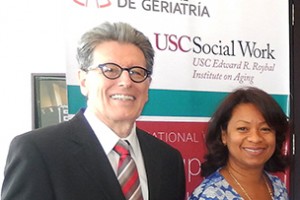 The workshop was sponsored by its co-hosts — the USC Roybal Institute and INGer — along with Mexico’s National Council on Science and Technology and the U.S. Embassy in Mexico City.

The embassy supported the event as part of the U.S.-Mexico Bilateral Forum on Higher Education, Innovation and Research. Established by President Barack Obama and Mexico President Enrique Peña Nieto, the initiative aims to increase academic, technical and scientific exchange between the two nations and further contribute to economic development in North America. It is spearheaded by Mexico’s Ministry of Education and National Council for Science and Technology and by the U.S. Department of State and U.S. Department of Education.

“There was great interest from the sponsors of this workshop to foster greater research interchange across countries,” said Provost Professor William Vega, executive director of the USC Roybal Institute. “We are pleased to receive critical support from major government institutions to support our research development and dissemination activities that we hope will ultimately bring about changes that improve the lives of older adults in the developed and developing world.”

The event was part of an ongoing series of activities organized by the Global Research Network on Aging and Health, which was founded by the USC Roybal Institute and INGer. The network promotes the use of comparative international research for developing scientifically validated public health and patient care interventions.

“We see ourselves as partners with USC and the Roybal Institute in efforts to address issues related to aging from a global perspective that incorporate advances in research with effective implementation to improve health systems and services,” said Luis Miguel Gutierrez Robledo, director general of the National Institute of Geriatrics in Mexico.

Participants at the workshops discussed the accelerated pace of global aging in the societal context of declining birth rates, changing family structures and unraveling social support networks that have affected the quality of life of older adult populations across the globe.

Numerous studies indicate that formal and informal social support play an important role in aging well. Even though family dynamics are changing in China, Mexico and the United States, family caregivers remain an important source of informal social support that can assist older adults in carrying out activities of daily living, manage the negative effects of chronic disease and maintain psychological well-being.

The workshop touched on many aging topics and health conditions, including dementia, that can make individuals more dependent on help from others.

“Dementia is the best example of a disease that makes it difficult for people to remain independent and shift major caregiving responsibilities to family networks,” Gutierrez Robledo said.

Dementia, depression and other chronic diseases such as diabetes and heart disease are rapidly expanding global burdens. There are currently an estimated 44 million people with dementia worldwide. The numbers will increase to an estimated 76 million in 2030 and 136 million in 2050.

Researchers in Mexico have collaborated by sharing databases with researchers in countries like China as part of the 10/66 Dementia Research Group, which focuses on population-based research into dementia, non-communicable diseases and aging in low- and middle-income countries.

“In China, people don’t even know or understand what dementia is,” said Iris Chi, holder of the Chinese-American Golden Age Association/Frances Wu Chair for the Chinese Elderly at the School of Social Work and a senior scientist at the USC Roybal Institute. “We have to find out who has the disease, and it is critical to provide basic training to people in the detection of it.”

The United States, Mexico and China each face unique challenges to providing adequate social support. Interventions exist, but they would need to be adapted to different cultural contexts and implemented effectively within complex health systems that are often slow to change.

“We have excellent interventions that have been developed that need to be tailored to different cultural situations and then assessed to see whether they’re working effectively,” Vega said. “Our intent at this workshop was to foment research and work with all parties interested in thinking about these issues to transform systems of care to make them adequate, if not more than adequate.”

INGer, the newest of the National Institutes of Health led by Mexico’s Ministry of Health, is dedicated to research on age-related diseases and their treatment, social and economic conditions of the elderly, and care for older adult populations.

Aileen Hongo calls them ladies. This small act of politeness may seem like nothing to most people. But as she sits in a folding chair next to these women, Hongo recognizes that for many of them, even the most basic courtesies may be all that they will ever know.

Of the many negative stereotypes that exist about older adults, the most common is that they are forgetful, senile and prone to so-called “senior moments.”

Curran to be honored for advancing research on aging

The Nathan Shock Investigator Award is named after a leader in gerontological studies.

USC, Mexico team up as co-hosts of aging conference