Pamela Schweitzer is not only a student in the Executive Master of Health Administration (EMHA) program at the USC Price School of Public Policy — she’s now rear admiral (RADM) and chief professional officer of pharmacy at the U.S. Public Health Service.

Overseen by the Surgeon General, the U.S. Public Health Service Commissioned Corps comprises approximately 6,500 public health professionals, including more than 1,200 pharmacists. The individuals work for a wide range of federal agencies, such as the Indian Health Service, Food and Drug Administration, Centers for Disease Control and Prevention, Department of Homeland Security, Coast Guard, Department of Defense and National Institutes of Health.

Our mission is to protect, promote and advance the health and safety of our nation.

“Our mission is to protect, promote and advance the health and safety of our nation,” said Schweitzer, whose new position also involves a promotion from captain to rear admiral. “We are also known as America’s Health Responders. In the event of a public health emergency or urgent public health need, Commissioned Corps officers can be deployed to provide support.”

In recent years, Commissioned Corps officers have provided disaster response leadership and humanitarian health services during several natural disasters such as Hurricane Katrina, the Haiti earthquake and the Indian Ocean tsunami, as well as supporting the response to the surge of unaccompanied children across southern borders.

‘A position of influence’ 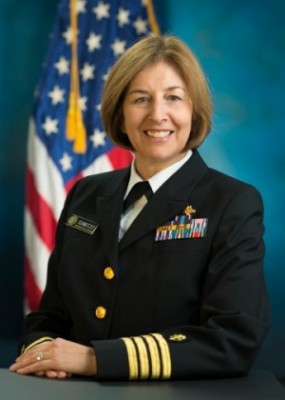 Schweitzer calls her new job “a position of influence,” which will enable her to innovate, facilitate and catalyze positive changes that improve the nation’s health. During her four-year term, she plans to mentor junior officers and expand the Commissioned Corps, as well as collaborate with the other federal services, including the Army, Navy, Air Force and Veteran’s Administration.

Another goal will be to enhance information technology infrastructure to allow more convenient access to health and pharmacy records, such as vaccination or prescription histories.

“Every day, it’s meaningful knowing that I can make a difference in someone’s life,” she said.

Schweitzer’s dedication to making a difference through public service has led to a 20-plus year career in the federal government. Her extensive professional experience spans service as pharmacy director at the Veterans Health Administration in South Dakota to being a clinical specialty consultant for the Indian Health Service in Arizona.

Originally from Orange County, Schweitzer was born into a family of proud Trojans with a passion for health care. Her father and uncle attended pharmacy school and her brother completed his undergraduate and medical degrees — all at USC.

A desire for new knowledge

Schweitzer earned her bachelor’s degree in biology from California State University, Fullerton, and her doctor of pharmacy from the University of California, San Francisco. She completed her residency at the UC Irvine Medical Center.

It wasn’t until her two children were in college that Schweitzer decided to go back to school and became part of the Trojan Family. In 2012, she joined the first online cohort of the Executive MHA at USC Price.

“I love my cohort,” she said. “They all have different skill sets and want to be part of improving the health care system in the United States.”

The EMHA course work became particularly relevant when Schweitzer started a new job in 2013 at the Centers for Medicare and Medicaid Services, where she helped implement the Affordable Care Act.

Schweitzer’s latest promotion to chief professional officer of pharmacy is “evidence of her commitment to improving population health,” according to Mike Nichol, professor of health policy and director of the graduate programs in health at USC Price.

“During her career as an EMHA student at USC Price, she’s consistently demonstrated creativity and a desire for new knowledge that inspires her peers and professors,” noted Nichol, who is also a research fellow at the Leonard D. Schaeffer Center for Health Policy and Economics. “Her administrative skills and leadership have been recognized at the national level, and I’m confident that she will use her new position to motivate others to innovate and lead.”

Ability to develop and test interventions aimed at eliminating disparities in communities is a key factor in the Keck School’s grant.

Ethics workshop to examine matters of conscience for, and rights of, health care workers

Executive will bring health expertise to USC School of Pharmacy

Kermit Crawford, who led a transformation of the pharmacy experience at Walgreens, will serve as executive in residence.

Promotion leads to a ‘position of influence’