From Big Bird to big booms, the USC Trojan Marching Band has been a fixture at the Hollywood Bowl since 1982. This evening, the group will perform the first of two nights of the “Tchaikovsky Spectacular” with the Los Angeles Philharmonic at the historic outdoor venue. It marks the third weekend this summer the band has performed there.

During opening weekend in June, the USC Drumline performed with the ’80s rock band, The Go-Gos, who were inducted into the Bowl’s Hall of Fame that day. The drummers joined the group onstage for its 1980 hit “We Got the Beat.”

In mid-July, an 80-piece contingent of the band performed its portion of the soundtrack to The Croods for two nights of “Dreamworks Animation in Concert — Celebrating 20 Years.”

Under the direction of composer Alan Silvestri, the band marched onto stage performing “Smash & Grab,” a song from the animated movie inspired by “Tusk,” the band’s hit collaboration with Fleetwood Mac. Augmenting the performance was sword-wielding emcee Jack Black’s entrance onto the stage wearing a full band uniform. 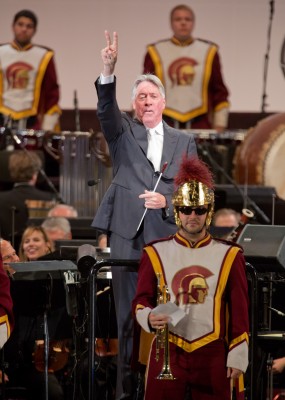 This weekend’s performance with the Philharmonic is a tradition that goes back decades. Every year, the popular “1812 Overture” ends the Tchaikovsky program. The Trojan Marching Band provides brassy support to the orchestra for the piece’s triumphant finale as the musicians attempt to be heard over booming cannons and fireworks exploding over the Bowl’s shell.

For its first summer date at the Bowl in 1982, the Trojans performed an entire program themselves on the Fourth of July. Called the “Family Fireworks Picnic Concert,” the band played popular rock songs and John Philip Sousa marches. The special guest conductor for the evening was Big Bird of Sesame Street.

Over the years, the band has performed at other special events at the Bowl, including the PBS special Jerry Herman’s Broadway at the Hollywood Bowl, the induction of John Williams into the Hall of Fame and last year’s Playboy Jazz Festival.

For director, Arthur Bartner — entering his 45th season as director — the Hollywood Bowl is the perfect summer stop for the group each year.

“The Trojan Marching Band is known as Hollywood’s Band,” he says. “You can’t get bigger than performing at the Hollywood Bowl during the summer. It’s a very prestigious place to play.”

The band will perform for the 25th consecutive year on the streets of Avalon.

The USC Trojan Marching Band will perform as part of the pregame festivities for the inaugural game of the 2014 NHL Stadium Series.

It’ll be the biggest thing to hit London this summer — well, at least until Queen Elizabeth’s Diamond Jubilee in June and opening ceremony for the Summer Olympics two months later.