Carly Rogers OTD ’11, MA ’04 learned early on that water heals. Her mother died when Rogers was only 18, and Rogers, then a Los Angeles County lifeguard, used to cleanse her grief in the Pacific’s salty waves. “I would dive under the water and just lie there,” Rogers said.

One day, she watched a boy with cerebral palsy drop himself from his wheelchair onto the beach to crawl and pull himself toward the water, and she had an epiphany. What if she could use the ocean for therapy? 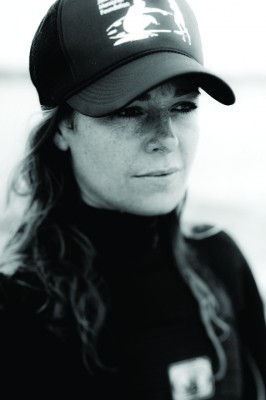 Carly Rogers sees the potential of the ocean as a form of therapy. (Photo/Ricky Lesser Photography)

Fast-forward a few years to when Rogers was pursuing her master’s degree through the USC Division of Occupational Science and Occupational Therapy. She wrote a proposal for an ocean therapy program as a mock class exercise. But when her lifeguard-friend Jimmy Miller died shortly afterward, his brother asked her to implement her dream program through a nonprofit organization set up to honor Miller. Not even a year after Rogers graduated, the Jimmy Miller Memorial Foundation began teaching adapted surfing to children who had suffered abuse. The foundation later extended the program to Marines and war veterans. It now runs about 60 sessions a year in Manhattan Beach, Calif., and farther south at Camp Pendleton.

Ocean therapy reduced symptoms of PTSD and depression in a small group of veterans from wars in Afghanistan and Iraq, according to Carly Rogers’ study in the July/August 2014 issue of the American Journal of Occupational Therapy.

The feat of standing up on  a board and riding a wave empowers people to overcome mental, emotional or physical challenges by boosting their self-esteem, Rogers explains. And for veterans, being part of the surfing community brings back a sense of family, something soldiers often say they miss after leaving the service, she said. The adrenaline rush associated with the sport offers a socially acceptable alternative to risky behavior, too.

Even her first time working with Marines, many of whom had post-traumatic stress disorder, Rogers saw that men who were guarded at the beginning of the session grew relaxed and open later on. “They came out [of the water] smiling and laughing and wanted to talk about it,” she said. “That inspired the rest of my life.”

Ocean therapy grew from  a far-fetched idea to a program serving hundreds thanks to a chain of serendipitous events, Rogers says. But it also emerged from what she knows best: the water. Raised on the beach, she’s taught surfing for two decades. She knows that you have to wait for that perfect moment to catch a wave, and then you go for it — in the ocean as in life.

It was a gloomy Saturday for the annual They Will Surf Again event in Malibu. Despite the chill in the air, Devon LeBlanc was all smiles.