Looking back, Jamie Weddle ’14 wonders about the scheduling coincidence that brought him near the Hollywood Premiere Motel one week ago.

The USC Rossier School of Education alumnus, who obtained his degree in educational counseling, works at the Los Angeles County Museum of Art and takes the train to and from work. Because of a shift change, his train arrived at the Hollywood/Western station at 3:32 p.m.

I have these moments when I think, “Oh, my God, this really happened. It’s what had to be done.

He was walking past the motel when he heard the distressed crying of children. Two children, in hysterics, were yelling, “Our mom is drowning.”

Weddle saw a figure in the deep end and dove in. He pulled her to the surface, where another Good Samaritan began CPR.

But there were more people in the pool. 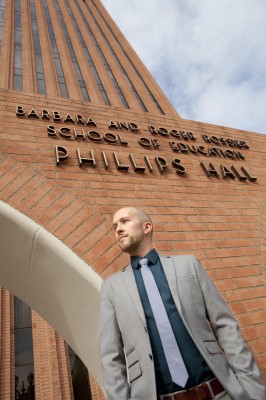 Jamie Weddle tried to save the lives of three family members who were drowning in the pool at a Hollywood motel. (Photo/Amy K. Fellows Photography)

“I feel this shock,” said Weddle, an Army veteran, upon realizing there was another person in the pool that he couldn’t see through murky water. But he found the boy, face down at the bottom of the pool and brought him up. He rescued an additional sibling before emergency personnel arrived.

The three were taken to a hospital in grave condition.

“I just recently graduated from USC Rossier, and I’m trying to find a job right now as a middle school counselor,” Weddle said. “All of my peers have gotten jobs.  All of sudden, a job means nothing to me. Here are these lives that are forever changed.”

He said the moment he walked away from the scene, he started crying.

“I was so affected by it,” he said. “It’s sad for me, it’s surreal. I have these moments when I think, “Oh, my God, this really happened. It’s what had to be done. There was no time to wait.”

Though he has not been identified in the media, Weddle is intent on clarifying some inaccuracies in news reports. He points to two men, also military veterans, who played a critical role administering CPR.

Although his fellow Good Samaritans handled the CPR, Weddle had taken a CPR class just two weeks earlier. He advises others to brush up on their life-saving skills.

“If I hadn’t taken the training and if I had to be the one to perform CPR, my mind would’ve blanked.”

The 12-year-old girl died on Aug. 12, the mother remains hospitalized in serious condition and her 11-year-old son has been upgraded to stable, according to a news report.

When the school bell rings and classes are done for the day, most students rejoice because it’s time to get away from schoolwork and go home.

A Trojan in touch with his USC Rossier roots

A high school unlike any other is coming to Los Angeles in the fall of 2012 and is designed for local students who are most at risk for dropping out.

Good Samaritan in the right place at the right time