The world has become an enormously complex place. In 1790, the U.S. Patent Office opened its doors, and it took 103 years for the office to issue its first half-million patents. Now it issues far more than that in a single year.

And this acceleration toward complexity isn’t just about patents — it’s also about the science that drives them. That’s especially pronounced in biomedicine. A century ago, a physician was everything in a town. He (or she) would deliver babies, dispense medication to the ill and even tend to a dog’s broken leg. Today, doctors are so specialized they can be experts on a disease like cancer, for example, in only certain parts of the body, such as the bones, in a specific segment of the population, like children. They may do research too.

That specialized knowledge has led to big advances, but there’s a flip side: These highly specialized scientists risk becoming so isolated that they might miss suggestions from others that could turn dead ends into new, promising research directions. It turns out that as our explorations peel away an ever-more intricate world, the connections between experts with wide-ranging perspectives become more vital. At USC, a movement is underway to bring together bioscientists and engineers to make the next generation of great leaps. It’s called convergence, and it melds three fields: life science, physical sciences and engineering.

Society needs convergent research to move innovation forward and fix difficult challenges, but greater coordination is needed, according to a 2014 report from the National Research Council. It’s going to take a culture shift for universities.

To understand how we got here, it helps to look to the past. The world of biology used to be rather flat, says Susan Forsburg, professor of biological sciences at the USC Dornsife College of Letters, Arts and Sciences. Biologists mostly studied how living organisms looked and behaved, and didn’t have a clear way to “get under the hood” to examine the molecular mechanisms that explained those behaviors. But during World War II, physicists got involved and shook up the field. They became interested in the mechanics of DNA.

In 1953, physicist Francis Crick teamed up with James Watson to crack the structure of DNA. Driven by new ideas, scientists then figured out how DNA works, changing biology forever and giving rise to an entirely new field: molecular biology.

“Biology quickly went from observational science to something that used quantitative molecular approaches,” Forsburg explains. The understanding of disease shifted dramatically as well. To cure someone of a disease, it became necessary to take that illness apart, cell by cell and gene by gene.

More recently, a genomics revolution has swept the sciences since the first map of the human genome was published in 2001. Sequencing an organism’s entire genome and pinpointing sequence differences has offered insights into the foundation of many diseases and suggested potential solutions.

“The Human Genome Project gave us a parts list for understanding living systems, and what we want to do now is understand what the instruction manual looks like,” says Steve Kay, dean of USC Dornsife.

Engineers have started bringing their own knowledge and skills to biological research as well. Take nanotechnology, which spurred new tools and understanding of the world on a tiny scale. Researchers have already created teeny particles that deliver drugs to targets inside the body. They’re even exploring using nanosponges to stop internal bleeding.

The stage is now set for the next wave of change, melding engineers, molecular biologists and geneticists. Researchers call this wave convergence, and it relies on specialists working side by side. “The way you approach a problem is a team atmosphere, and the tools are new, so it can’t be effective through virtual connections between people,” Kay says. “Convergence needs a venue to be effective—a venue for really smart scientists and engineers to approach problems that are relevant to medicine.”

USC in 2103 recruited biologist and interdisciplinary bridge-builder Scott Fraser from Caltech to help bring these experts together as director of science initiatives within the USC Office of the Provost. He’s uniting physicists and engineers, computational biologists and chemists, and that’s just for starters. Already, he and fellow faculty have begun bringing in the latest scientific equipment — including one of the world’s most powerful experimental microscopes — that they’ll all share, whether they come from biology, engineering or another field.

The new faculty, new equipment and new cooperation are evidence that the age of scientific silos is over. Forsburg, for one, relishes it, and she’s quick to cite another example of convergence from her discipline of biological sciences.

“If you look at the acronym MCB at USC, here that stands for ‘molecular and computational biology,’” she says. “Our math-oriented colleagues help us make sense of those big data sets. We’re always looking for anything that mixes the pot and makes great synergy possible.”

It hasn’t always been easy to cross-pollinate different arenas of science. Mark Thompson, a chemist and materials scientist at USC Dornsife and USC Viterbi School of Engineering, says that when he started his career in 1987, scientists strived to be the sole authors on research papers. Forget collaborating with peers in your department, much less with researchers in other fields across campus. “Fortunately, we’ve moved away from that model,” he says. 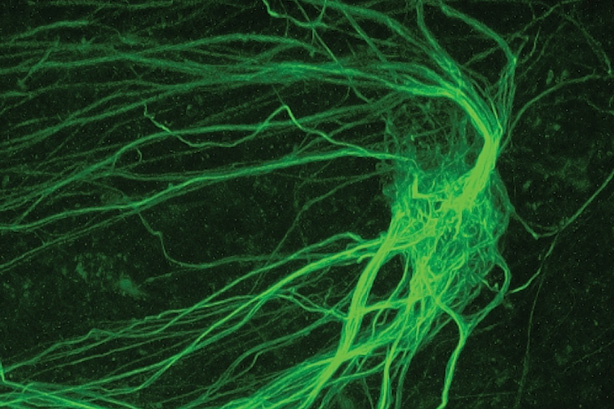 Research from the lab of Scott Fraser crystalizes the value of convergence. Fraser brings people together to create the technology they need to see critical microscopic moments in the life of an organism. They use their new imaging tools to better understand complex events, like specialized nerve cells forming in mice, as shown, or the origins of disease. (Imaging/David Koos)

With researchers today more open to working together, big ideas from one scientific field can quickly translate into others, says Michael Quick, executive vice provost and professor of biological sciences. “I think we’re about to see an increase in the number of practical solutions to problems coming at a faster rate,” he says.

Part of the challenge is time and communication, Quick says. Physicians might have ideas that could help scientists, but they’re busy with patients. And scientists and engineers aren’t aware of the essential problems physicians need to solve.

But Yannis C. Yortsos, dean of USC Viterbi, says that the explosive pace of science and engineering has radically transformed all fields, including medicine. More than ever before, experts are working together to condense the time between scientific discovery, technology development and its application. “In the past, it took a long time for something to become useful,” Yortsos says. “Today, the distance between the discovery of a phenomenon and its leveraging for useful purposes has shrunk dramatically. This is particularly important for interdisciplinary work, where people work and innovate closely together.”

Take the artificial retina, for example. The implanted device helps restore vision. Led by University Professor Mark Humayun, a team of engineers, ophthalmologists, computer scientists and biologists from USC, other universities and industry have come together to invent, test and perfect the device.

The researchers had to bridge cellular biology — necessary for understanding how to stimulate retinal cells without permanent damage — with microelectronics, which led to the miniaturized, low-power integrated chip that converts signals and stimulates the cells. The hardware had to work seamlessly with software processing and tuning algorithms, and the whole package had to operate inside the eye. Then the team had to figure out how to surgically integrate the device inside the body, making sure that its 1,000 electrodes were placed in the exact spot in the eye only 6 millimeters across.

The U.S. Food and Drug Administration approved the device in 2013, and physicians are now implanting it into patients.

Finding clean and sustainable energy. Fighting disease. Feeding a growing world population. Which of these problems might convergence begin to solve? Perhaps all of them, and more. 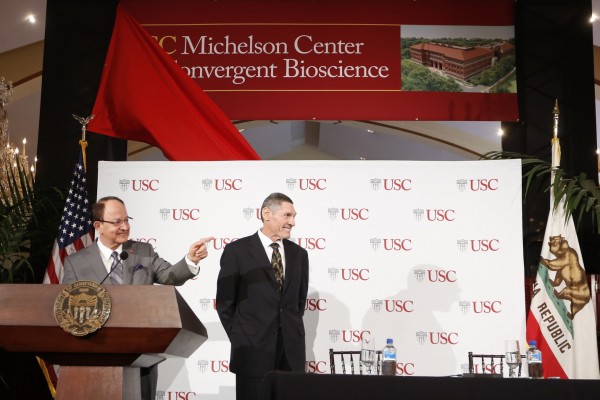 Thompson already lives out the movement every day. With his USC Dornsife and USC Viterbi colleagues, he’s used chemistry and engineering to create a way to light up smartphone screens four times more efficiently than ever — a technology now used by Samsung. He’s also working on lightweight, portable solar energy cells. Yet he’s just as excited about the potential for convergence to boost human health.

“We’re almost at the point where we can sequence someone’s genes and identify the best drug based on the person’s genetic makeup,” Thompson says. “So, as we understand the human body better, it’s going to lead to revolutionary things.”

The U.S. Food and Drug Administration has approved the Argus II retinal prosthesis system for use in the United States.

Elizabeth Garrett has announced the appointment of Scott Fraser as Provost Professor of Biological Sciences and Biomedical Engineering and the Director of Science Initiatives.

Each pixel in an OLED screen has three clusters of molecules — red, green and blue — that can be alternately energized to produce different colors.