Growing up in Ukraine, Oleg Prezhdo loved mathematics, not unlike his mathematician mother. But ultimately, his father, a physical organic chemist, encouraged him to pursue chemistry.

The whole system in the U.S. makes you think more, in a good way, about applications.

As July ended, the theoretical chemist moved his family 2,600 miles to Los Angeles, where he has accepted a post as professor of chemistry at the USC Dornsife College of Letters, Arts and Sciences.

“A number of my students are moving with me, and there’s a big incoming class in chemistry at USC this fall, so we’ll pick up some students there, too,” he said. His USC lab will focus its research on finding new ways to produce more efficient solar energy.

“The goal is to make solar cells less expensive and more efficient because that’s the main problem and the reason why they’re not used so much right now. We’re trying to use more affordable materials.” 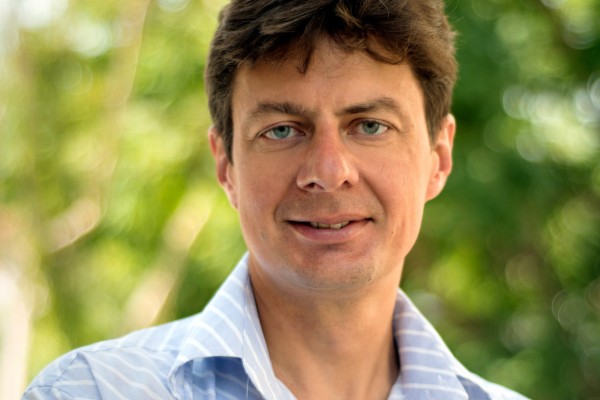 He explained how he combined fields to focus his research on solar energy and nanotechnology.

“My research is solar energy-related or energy-related in general. My background is somewhere between chemistry and physics,” Prezhdo said. “When I started my independent research career, I did a lot of fundamental research. I looked at how to combine quantum and classical dynamics and focused on non-equilibrium processes that happen very fast. The creation of solar energy is such a process because you take light, a photon, and you excite electrons, and generate positive and negative electrical charges very quickly.”

With his interest in the fundamental aspects of dynamics and processes that happen in a very fast time frame, he began to think about practical applications of the research, such as technology or inventions.

“The whole system in the U.S. makes you think more, in a good way, about applications.”

One option was solar energy.

“This was before solar energy became very popular,” he said. “I started around 2000, just because it was an interesting application.”

Prezhdo is looking forward to joining the ranks of the chemistry department at USC Dornsife, noting its strength in theoretical chemistry.

“Including me there will be five theorists, which is rare,” he said. “Of course [Distinguished Professor of Chemistry] Arieh Warshel just won the Nobel Prize, which makes that area of the department even stronger. I will also be connected with researchers doing vigorous work in this area.”

“I will be in excellent company,” he said.

A research team of USC Marshall MBA students has concluded that a sustainable world is not within immediate reach as issues surrounding unclear global policies, affordability and myopia among political leaders and consumers are thwarting businesses from investing in sustainable energy.

USC is home to one of the most advanced microscopes in the world — a device that pushes beyond what was once believed to be the boundary of visible light imaging.