More than 70 teams from five countries took part in this year’s Global Conference on Educational Robotics at the Galen Center.

Win or lose, they produced something. They’re running it.

The annual conference, hosted by the KISS Institute for Practical Robotics (KIPR), gives students, educators and professionals an opportunity to connect, share ideas and discuss the latest advances in robot technology.

It also provides a forum for teams to pit their robots against one another in head-to-head competitions. This year’s events focused on assistance in physical rehabilitation as robots were tasked with helping the Botball mascot, Botguy, perform rehabilitation exercises such as putting hangers on a bar, demonstrating one of the many practical applications of robots in the future.

Real programming languages in use

Ross Mead, Botball organizer and computer science doctoral student at the USC Viterbi School of Engineering, was inspired by the next generation of scientists and engineers. From kindergarteners to high school seniors, the students are building and programming robots — and not with visual programming shortcuts or simplified programming platforms but with the real computing language used by researchers and professionals.

“A lot of times people say that kids will not be able to understand real programming languages,” Mead said, “and it’s not true, and we’re showing that.”

’Bots on the board

Each robot placed on the competition table was unique, with different armatures to accomplish the tasks of picking up the plushy Botguy and putting hangers on various bars. Many were built atop an iRobot Create Programmable Robot. Mead noted that iRobot — a Botball sponsor — provided the robot as an option for the students to use as a mobile platform. 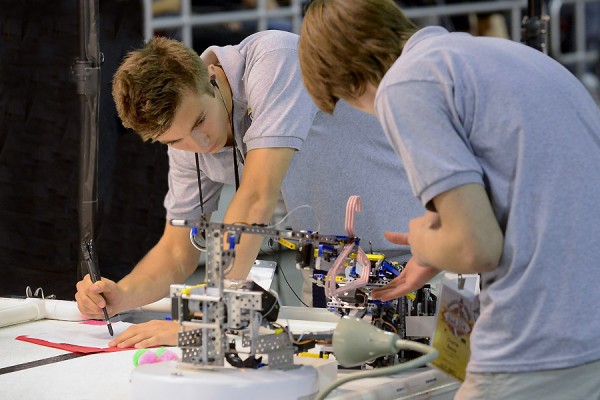 Competitors placed their robots on the starting platform of the game board and positioned gooseneck lamps to illuminate a light-sensitive sensor on their robots. Since the robots were entirely autonomous (as in, not remote-controlled), that’s how the robots were informed that the competition had begun. The judges then initiated an automated countdown procedure to turn on the lights, and the robots came alive, moved around the game board, positioned hangers and picked up Botguy.

Once everything was in motion, teams cheered on their robots, hoping the code running each one would equip it to make the right decisions and complete all the tasks. And the excitement was infectious.

For high school student Chloe Grubb, the highlight of the event was the friendly community.

“You’ll see a lot of teams helping other teams, spending time with other teams and trying to get them to do well because everyone here wants to see everyone succeed.”

For Steve Goodgame, executive director of KIPR, the social aspects of the conference were just as important as the technical skills.

“My favorite part is watching the kids during the social interaction,” he said. “They’re here with like-minded peers, and I know they’re creating lasting friendships.”

Taking robots from the lab to grade school

While USC’s robotics lab conducts cutting-edge research, an afterschool program funded by the university is studying artificial intelligence at a more elementary level — as in, elementary school.

The Directorate for Computer and Information Science and Engineering at the National Science Foundation awarded $10 million on April 3 to a team that includes USC researchers as one of four new Expeditions in Computing awards.

Botball has been very good to them

Autonomous robots created by local students vie to complete intricate tasks at a competition at USC.

No shortcuts taken at robots roundup