The USC community is mourning the loss of one of its most accomplished graduates, Maj. Gen. Harold J. Greene MS ’89, MS ’90, PhD ’92, who died in the line of duty in Afghanistan on Tuesday.

“General Greene served our country with honor and distinction. He served with unparalleled dedication and offered the highest sacrifice, his own life,” said Yannis C. Yortsos, dean of USC Viterbi. “We are honored and proud to count him as our own. Our thoughts and prayers are with his family.”

We are honored and proud to count him as our own.

His time at USC

Florian Mansfeld, now a professor emeritus of materials science, served as Greene’s academic advisor at USC. He remembers a warm and friendly student, a bit older than his classmates but friendly with everyone.

“Everybody liked him. He had a great sense of humor,” Mansfeld said. “He worked very fast, and was always willing to help the other students.”

Before applying to USC, Greene called Mansfeld and told him that the U.S. Army had given him an opportunity to pursue a PhD — at a different school.

“He told me he was supposed to go to another university, but that he liked my program better,” Mansfeld said. “He wanted to come to USC.”

Greene somehow convinced his superiors to send him to USC’s engineering school, where he researched and wrote a dissertation about how the materials used in helicopter rotor blades experience corrosion and fatigue when exposed to polluted air.

His devotion to his work was mirrored by his devotion to his family, Mansfeld remembers. Mansfeld often invited students to his home for holiday dinners, which Greene attended with his wife and young son. His daughter was born right around his graduation. 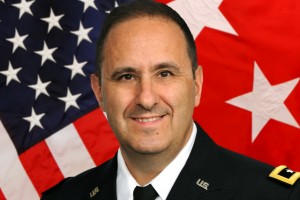 After leaving USC, Greene’s expertise in airframe materials translated to a job helping the Army investigate helicopter crashes. Having developed a strong bond, Greene hired Mansfeld as a consultant, and they worked together to improve the safety of helicopters by understanding what causes failures. From there, he rose through the ranks of the Army, ultimately earning promotion to two-star general in 2012.

In his more than 30 years with the Army, Greene earned numerous commendations and awards, including the Distinguished Service Medal. Throughout it all, he stayed in touch with Mansfeld — corresponding with his former mentor to update him about his work and family.

“He was always very proud of his children,” said Mansfeld, who called to congratulate Greene when he was promoted to brigadier general. The Department of Chemical Engineering and Materials Science at USC Viterbi likewise always remembered him with pride, also posting congratulations to Greene upon his promotion.

Greene was deployed to Afghanistan for the first time this year — and did not hesitate to do what he felt was his duty, Greene’s father told The New York Times. He was the highest-ranking soldier lost in the line of duty since the Vietnam War.

Megan Hazle contributed to this report.