The USC Thornton School of Music’s Popular Music Program will showcase multitalented USC Thornton students and alumni Aug. 17 from 6 to 9 p.m. at the 5 Towers stage on Universal CityWalk.

This provides a wonderful platform for these talented artists to perform and earn new fans.

The group will be joined by two USC alumnae: DJ Shy, one of the most successful female DJs on the club circuit, who will spin throughout the event; and Suzanne Marques ’99, CBS Los Angeles entertainment reporter, who will serve as emcee for the evening.

A ‘wonderful’ platform for Trojans

“We are so grateful to Universal CityWalk for this opportunity,” said Chris Sampson MM ’96, vice dean of contemporary music at USC Thornton. “This provides a wonderful platform for these talented artists to perform and earn new fans.” 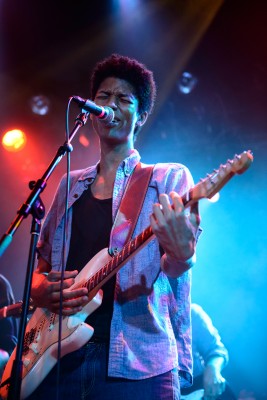 Founded in 2009 and hailed by Rolling Stone as “the cutting-edge department that’s become the site of Los Angeles’ most productive new music scenes,” the Popular Music Program is a unique music degree for the rock, pop, R&B, folk, Latin and country artist.

Each highly selective class is limited to 25 talented songwriters, vocalists and instrumentalists who enroll from all regions of the United States. The size of the program allows for collaboration among students, many of whom have not performed with other musicians before arriving at USC Thornton.

“The Popular Music Program is amazing,” Childs said. “I’ve seen people go from being just a guitarist or just a bassist to being a producer, a singer-songwriter, an arranger. That’s how I’ve been able to develop and sustain a sound for myself.”

Students attribute the success of the Popular Music Program’s alumni to the skills taught in the program’s courses.

“I feel the program has prepared me for more than just performing as Huxlee,” Notey said. “I now feel comfortable going into a session and writing for another artist. You’re given the tools you need to go into any sort of situation in the music industry.”

The USC Thornton showcase is free and open to the public. The 5 Towers is a standing-room only outdoor stage.