High school students play key roles as members of the USC program Science, Technology and Research, better known as STAR. The teens take part in projects seeking solutions to some of the world’s most challenging illnesses, including cancer, diabetes, Alzheimer’s and HIV/AIDS. On Aug. 1, the USC School of Pharmacy hosted a celebration marking the program’s 25th anniversary.

I remember hearing Dr. Brinton talk with such passion during my first day in the lab, and I figured I also wanted to be a neuroscientist.

“Over 600 students have completed the STAR program since we started it 25 years ago,” said Roberta Diaz Brinton, R. Pete Vanderveen Professor in Therapeutic Discovery and Development at the School of Pharmacy and the program’s director. “These students have contributed to over 100 scientific publications, listing them as co-authors while still in 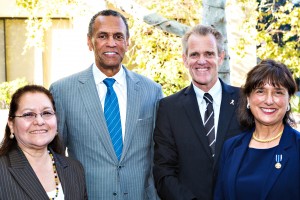 high school. And 100 percent of our STAR students have gone onto universities — many to the nation’s elite schools like USC, Harvard, Yale, MIT, Princeton and Stanford.”

The evening held in STAR’s honor brought together current students, recent graduates now in college or graduate school and successful alumni who shared their experiences. Among them was Arthur Ohannessian, now a physician at UCLA.

“I couldn’t wait to come to this reunion to say thank you,” he said. “I would not have the career I have and be able to make the impact on my patients and my family if not for the STAR program.”

He was the first in his family to go to college, said Ohannessian, who credits STAR with influencing his decision to go into family medicine. During his time with the program, Ohannessian was credited on three professional publications that he is proud to still have on his dossier, he said.

Ohannessian’s sentiments were repeated throughout the evening as STAR alumni talked about their past experiences and current positions. STAR is a partnership between USC and the Francisco Bravo Medical Magnet High School in the Los Angeles Unified School District.

Students who participate in STAR join their assigned USC lab teams every afternoon to conduct experiments. The daily lab time is a component of their high school curriculum. According to Bravo Principal Maria Torres-Flores, many parents ask her “what do we need to do to get our children into the STAR program?” In addition to the lab experience, the students are provided with mentorship in addition to help with college applications and career advice.

“STAR taught me how to work in a lab and alongside a lab team,” said Elvia Ahmed, who graduated from the program in 2013 and is now a student a Princeton University. “I remember hearing Dr. Brinton talk with such passion during my first day in the lab, and I figured I also wanted to be a neuroscientist.”

Thomas Sayles, senior vice president for University Relations, noted that STAR is a vital part of the university’s mission to inspire and uplift the community. He also shared proclamations celebrating the program’s accomplishments from Los Angeles Mayor Eric Garcetti and the Los Angeles County Board of Supervisors. The USC Good Neighbors Campaign has been among the ongoing financial supporters of the program.

In addition to labs in the School of Pharmacy, other USC labs with Bravo students on their teams include the California Institute for Regenerative Medicine, the Institute for Global Health, the Keck School of Medicine of USC and the Ostrow School of Dentistry of USC. Along with USC, supporters of the program have included the Whittier Foundation and the Kenneth T. and Eileen L. Norris Foundation.

Manisha Sajnani, who will begin her freshman year at USC in the fall, said that her “STAR eureka moment” came when she was charged with performing life-saving surgery on a frog in the laboratory.

She recalled how the experience made her realize the difference between a high school biology class and work in a USC lab. After she did the required suturing on the frog, she impatiently watched as the anesthetic wore off, and it began swimming again in good health.

“It was at that moment,” she said, “that I knew I wanted to become a neurosurgeon.”

The evening included comments from former STAR students, including an orthopaedic surgeon, an AIDS researcher, a family physician, a hospital pharmacist, a White House policy intern and a medical scientist who studies brain tumors, among others.

‘Grateful for the fundamentals’ 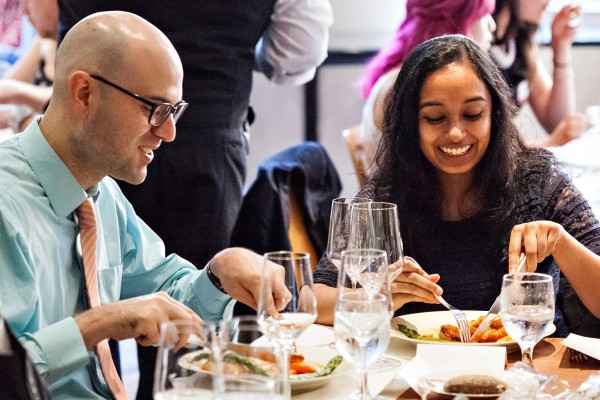 “I am grateful for the fundamentals that were instilled in me by STAR,” said David Akhavan, who recently completed an M.D./Ph.D. in the UCLA-Caltech Medical Scientist Training Program.

“The USC School of Pharmacy has been the hub for the STAR program since its inception,” said Dean R. Pete Vanderveen. “And the program’s success has been recognized nationwide. In fact, Roberta Diaz Brinton received the Citizen’s Medal of Honor, one of our nation’s highest civilian awards, for her work in STAR from President Obama in 2010.”

The dialogue during the event, both from the podium and at the tables, demonstrated that STAR provides a firm foundation from which to soar. After all, 88 percent of the program’s graduates have gone into science, technology, engineering and medical careers.

“If you’re going to learn something, embrace it and learn it all,” said current student Jose Garcia, who added that it helps to “have a steady hand when doing lab work.”

A keen sense of science

Two doctoral students at the USC Dornsife College of Letters, Arts and Sciences were awarded the Graduate Student Prize for Excellence in Research from the USC Center for Applied Mathematical Sciences for contributions to the fields of mathematics and physics.

According to the National Science Foundation, 80 percent of jobs in the future will require some math and science skills. “Math and science are the new foundational literacy for everyone,” said Tom Luce, chief executive officer of the Math and Science Initiative.

Dedication to science pays off

Frances Richmond, director of the regulatory science program at the USC School of Pharmacy, has been recognized with an Award for Excellence in Regulatory Affairs.

Roberta Diaz Brinton, director of the USC Science Technology and Research Program, was presented with the prestigious 2010 Presidential Citizens Medal by President Barack Obama in a ceremony at the White House on Aug. 4.