On a stage with bouquets of white flowers from well-wishers and a picture of a beaming Ji at his college graduation from Zhejiang University, Dean of Religious Studies Varun Soni led the memorial that included speeches translated in both English and Mandarin from USC leaders, the Deputy Consul General of the Chinese Consulate of Los Angeles, family and friends. Ji’s family in attendance included his father, Songbo Ji; mother, Jinhui Du; and uncles and aunts who had flown from China.

A bond that unites

While the memorial reflected upon the sadness of Ji’s untimely passing, there was also a united resolve to help each other heal and find a path forward.

“The tragic loss of this incredible young man is shocking and senseless,” said Elizabeth Garrett, USC provost and senior vice president for academic affairs. “Our academic community must remain strong and united as we mourn.”

Citing the power of the arts to bring comfort in times of deep sorrow, Garrett read the poem “Prayer” by celebrated American poet and USC Judge Widney Professor of Poetry and Public Culture Dana Gioia, which he had written after the death of his own young son.

USC Viterbi School of Engineering Dean Yannis C. Yortsos spoke of the strength of the Trojan community to provide support. He drew upon his own experience as a father of USC Viterbi engineering students and for once being a young international student who also came to America ready to change the world. 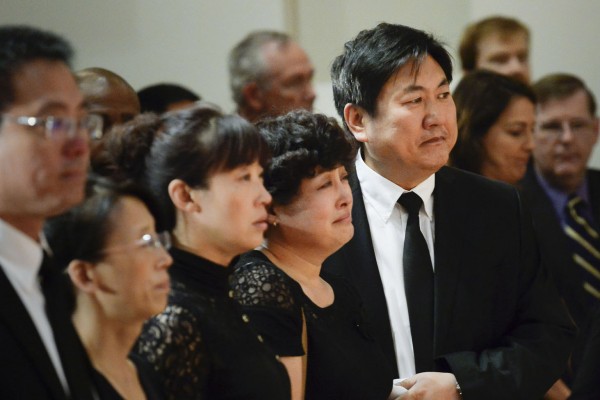 “These two common bonds between us are not circumstantial,” said Yortsos of his connection to the Ji family. “They are a strong manifestation of our power and enduring association — the Trojan and Viterbi family. The family is not made up because of the tragic loss of Xinran — we’ve been connected for a long time.”

Yortsos also announced that to honor his family, the Xinran Ji scholarship fund would be established so that “Xinran’s memory would live on forever.” It will be awarded annually to a promising electrical engineering graduate student from China, Hong Kong, Macau or Taiwan.

Ji’s friend Xu Yuan, president of the Chinese Students and Scholars Association, brought tears to the audience during his speech when he pointed out that, as is the case for so many Chinese families only allowed to have one child, Ji’s loss leaves an incalculable void for his parents.

Xinran, you’ve left … but we want to tell you that you should have no regrets. We’re proud of you.

Songbo Ji, in a letter to his son

Speaking directly to Ji’s parents from the stage, Yuan assured them that the emptiness would not destroy their family. “At this moment, all of us are your children,” Yuan said. “We want to help you bring comfort so that you can lay down your troubles. We will help you warm your hearts and walk away from this dark shadow.”

He added: “Xinran, we will take care of your mom and dad, so rest easy.”

Speaking on behalf of the family, Ji’s uncle Lisheng Liu read aloud from a letter written by Ji’s father. “Xinran, you’ve left, but we know you didn’t want to leave your mom and dad, grandparents, uncles, aunts, cousins, friends, professors and teachers. But we want to tell you that you should have no regrets. We’re proud of you.”

Soni closed the ceremony by reminding the audience that in dark times, remembering “Xinran’s bright light” would help honor his love of life and learning.

Friends remember a budding engineer and ‘young star’ who wanted to record the world, then make it better.

Dean Yortsos on the tragic loss of Xinran Ji

The USC Viterbi School of Engineering mourns one of its family members.

USC remarks from a police press conference announcing progress in the investigation of a graduate student’s death.

A message from USC vice provost for Student Affairs

An update from Ainsley Carry, who met with Chinese student leaders to discuss campus safety.