“A veteran might be mowing his lawn on a peaceful summer’s day and suddenly the smell of gasoline from the lawn mower will trigger a flashback to a terrifying roadside bomb attack he experienced while serving in Afghanistan,” Marat Zanov PhD ’09 said.

Russian-born Zanov, who earned a Ph.D. in psychology at the USC Dornsife College of Letters, Arts and Sciences, knows what he’s talking about. A former U.S. Air Force captain, he served for six years, during which time he was deployed for six months in hostile territory in Afghanistan’s Parwan province. There, he flew the U.S. flag over his forward operating base, later donating it to the Department of Psychology at USC Dornsife, where it now hangs on a wall in the main office.

The big question we had starting out was would being in a virtual reality environment provide the same kind of psychological and physiological reactions as being in the real environment.

As a military clinical psychologist, Zanov treated many cases of PTSD and a broad range of traditional clinical problems.

Zanov and McDaniel began their doctoral programs at USC Dornsife in 2004. Although McDaniel followed a different path, studying public health and training as a child psychologist, like Zanov she also spent several years in uniformed service, attaining the rank of lieutenant commander during her three years stationed at the Centers for Disease Control in Atlanta. McDaniel now heads up research and development at Virtually Better, while Zanov is in charge of training clinicians to use their products.

Zanov is using his insights as a military clinical psychologist, coupled with his personal experience of deployment in Afghanistan, to fine-tune the virtual reality environments the company offers to providers treating patients with PTSD and other anxiety disorders.

“The big question we had starting out was would being in a virtual reality environment provide the same kind of psychological and physiological reactions as being in the real environment,” said McDaniel, who also earned her Ph.D. in psychology. “We found that we can successfully replicate many real-world scenarios or many people’s memories through virtual reality simulations.”

Repeated exposure to these realistic simulations has been shown to reduce symptoms of PTSD and other anxiety disorders, ranging from fear of flying to arachnophobia.

“We create a virtual environment where we can expose the patient to previously feared situations and get them comfortable in those environments so they can eventually overcome their impairment,” Zanov said

The sophisticated software Zanov and McDaniel are using to treat PTSD was developed by a team led by Albert “Skip” Rizzo, director of medical virtual reality at the USC Institute for Creative Technologies.

Called Bravemind, the software provides a virtual recreation of Afghanistan and Iraq environments.

The program allows clinicians to tailor the virtual reality environment to the patient, who can experience being a passenger, a driver, a commander or a gunner in either a Humvee or an MRAP, both widely used military vehicles in Afghanistan and Iraq.

Alternatively, patients experience being part of a foot patrol in a village or market. The patient can then be exposed to simulated situations, such as an ambush, a roadside mine or a rocket-propelled grenade attack. The patient may witness comrades being wounded or killed, civilian casualties or an “aerovac” — a Black Hawk helicopter picking up casualties.

The theater of war

“We can tailor those scenarios very closely to patients’ experiences, virtually placing them into traumatic situations they carry in their memories from the theater of war,” Zanov said.

“Over a couple of sessions we fine-tune the environment to their specific experience and then repeatedly expose them to it in subsequent sessions.”

By engaging multiple senses, the experience is designed to be as realistic as possible. Patients hold a simulated weapon while wearing a head-mounted display incorporating futuristic goggles with two screens and headphones.

“The experience is pretty immersive,” Zanov said. “The patient can see almost in 3-D, and there is a tracker in the head-mounted displays that shows variations in the environment if they turn their head and look around or look up or down, while the soundtrack they hear through the headphones corresponds to the sounds of the Humvee, ambient street noises and explosions they witness via the displays.”

Standing on a vibrating platform that shakes each time there is an explosion, a shootout or an engine’s rumble provides an additional tactile experience.

To make the experience even more realistic, a scent machine adds an olfactory layer of body odor, garbage, sewage, gunpowder, market spices or diesel fuel. Again, the scents are individually tailored to fit closely with the patient’s experience.

McDaniel and Zanov are now developing mobile apps, software and training applications for use in clinical practice.

Help for children, too 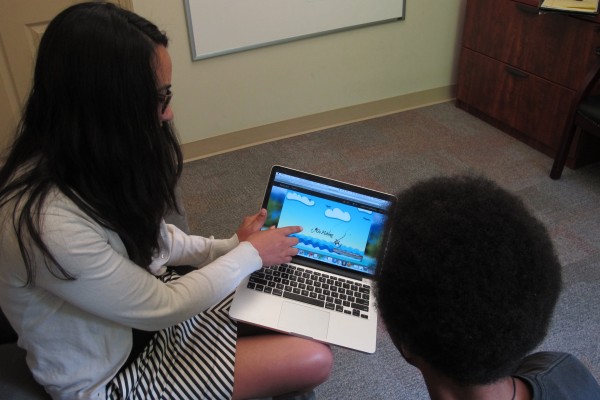 McDaniel has also been instrumental in developing affordable online treatments, including a Web-based treatment for mild anxiety in children.

“If children are experiencing mild anxiety, their family can download a pirate-themed adventure that does all the same things at home we would do clinically in the office for a fraction of the price,” McDaniel said.

“We ask kids to develop lists of things they’re scared of and categorize them,” she said. “We then develop small steps toward their main goals. So if they’re scared of spiders, they may first go into a room with a spider, then approach the spider, until by the end of the treatment they are putting the spider in a cup and taking it outside.”

With the importance of serving veterans and their families growing more compelling every day, the Levys has committed to the USC School of Social Work $156,000 to establish a scholarship fund geared toward veterans.

MSW@USC student David Curry is all too familiar with the struggles veterans face once their service ends and they must return to civilian life.