In 2011, the Arab world exploded. Protests rippled throughout the region’s most repressive states, in some cases overturning regimes that had stood intact for decades. Middle East scholars like Laurie Brand watched with a mixture of fascination and cautious hope that a new era of democracy — or at least a weakening of authoritarian rule — had arrived.

The unrest erupted as Brand, Robert Grandford Wright Professor and professor of international relations at the USC Dornsife College of Letters, Arts and Sciences, was in the middle of a research project on the region’s political history.

It’s clear to me from having done this research that leaderships understand that how they justify their policies, their right to rule, is important.

In countries like Egypt and Algeria, violence, cronyism and military rule have all been vital in preserving power. But another tool, one that has been largely overlooked by scholars, is the role of national narratives — the “official stories” crafted by politicians to define a national identity. These stories have been complex, shifting and even contradictory, Brand said. They’ve also shaped how each nation’s people see themselves and one another.

In August, Stanford University Press will publish Brand’s research under the title of Official Stories: Political and National Narratives in Egypt and Algeria. The book is arriving at a good time: Several years on since the media-dubbed “Arab Spring,” it’s hard to say what legacy the protests of that time will leave behind.

Countries that held promise for a new dawn, like Syria, have descended into chaos. Others, like Egypt, have come full circle and returned to military rule. In all of them, there’s a struggle underway, both politically and in a war of words, Brand said. Her book will be instructive as new power blocs shape public discourse about the nations they hope to govern.

“It’s clear to me from having done this research that leaderships understand that how they justify their policies, their right to rule, is important,” Brand said. “It’s not something they think about lightly. They think carefully about these things and craft stories to legitimize themselves.”

As its title implies, Brand’s book examines the official lines from different regimes in Egypt and Algeria’s post-independence histories. That includes a textual analysis of constitutions, presidential speeches and official policy announcements. Perhaps the most fascinating store of material, however, was educational textbooks. Official regime narratives targeted children as much as adults, and their content revealed the evolution of state narratives as different ideologies and political elites transitioned into power.

“Material that students study in history and civics classes is foundational — its impact can go well beyond what is absorbed by listening for two hours to a speech on the radio. You’re getting it year after year,” Brand said.

Because of dysfunction in the educational systems of the countries Brand was studying, textbook changes were sometimes delayed until long after a policy shifts. That led to some idiosyncratic civics lessons, such as books extolling the values of socialism years after the private sector had been embraced. 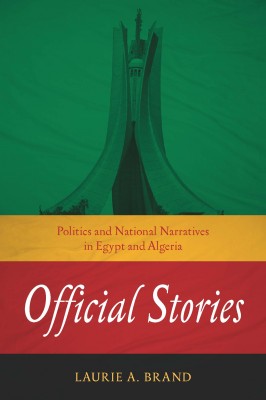 Official Stories will be released in August. (Photo/courtesy of USC Dornsife)

Brand pointed out that there’s an interesting question in this: What impression did these apparent contradictions leave on children who were reading one narrative, but experiencing another in the world around them? How do people resolve the conflict of what they’re told and what they see?

What Brand’s research into educational texts underlined the most is the tragic failure of educational development in the Middle East. Ignorance — in some cases, Brand said, “programmed ignorance” by the regimes — has led to large numbers of uneducated youth who have a poor understanding of the world and are unprepared for the global labor force. This has directly contributed to the region’s corrupt political systems, where the few who manage to attain some education focus more on becoming upwardly mobile than solving their nation’s infrastructure problems.

Egypt has had a particularly volatile transition since 2011, including the ouster of former President Hosni Mubarak and the election of the Muslim Brotherhood’s Mohammed Morsi. The eventual coup by current President Abdel Fatteh el-Sisi returned the country to repressive military rule, and it raises intriguing questions about how the newest heads of government will define themselves in relationship to previous official historical and identity narratives. Whether they will choose to borrow reference points from past regimes or create new storylines remains to be seen, Brand said.

For Egypt and nations going through similar revolutions, the outcome of recent unrest represents a political “reboot.”

“I think it’s possible that this transitional period we’re in now will end up crystalized as a relaunching of the national story,” Brand said. “This is potentially a new starting point to which people can make reference.”

Digging for peace in the Middle East

Israelis and Palestinians may not be able to agree right now on their present or future, but if a pair of Los Angeles archaeologists have their way, they soon will see eye to eye on their past.

Exploring Economics in the Middle East

One of the issues explored by the USC Marshall School of Business students who headed to the United Arab Emirates this past spring was whether the economic difficulties in the United States also were affecting people in Abu Dhabi and Dubai.

The Middle East cuts a wide swath: It contains a number of countries, a multitude of languages, cultures and customs, and thousands of years of history.

Seeking peace in the Middle East