The award-winning poster described Pinkerton’s efforts to measure the north-south and east-west motions of gas during two solar cycles of the sun.

In his work, Pinkerton processed observations taken over portions of 22 years at the Mount Wilson Observatory’s 60-Foot Solar Tower. As part of his analysis, Pinkerton had to determine whether the image plane of the telescope itself was rotating very slowly during each day. He concluded that the instrumental rotation was much smaller than earlier estimates, if not actually nonexistent.

In his work, Stephen Pinkerton processed observations taken over portions of 22 years at the Mount Wilson Observatory’s 60-Foot Solar Tower.

This was an enormous endeavor since data collected from the tower, which has settled during its more than 100 years atop Mount Wilson in the San Gabriel Mountains, slightly tilting the telescope mirror, may have contained a small error. Pinkerton’s research reprocessed the data to identify the magnitude of the rotation, providing the means to discover correct statistics.

“This award means so much to me,” Pinkerton said. “I worked with data produced from Mount Wilson since 1987. This has opened up communication, and people are becoming more interested in working with results from our Mount Wilson data study.”

Led by Edward Rhodes, professor in the Department of Physics and Astronomy, the USC Dornsife College of Letters, Arts and Sciences has acquired time series of full-disk dopplergrams at the solar tower each year from 1987 to 2009.

At the tower, helioseismologist Rhodes conducts research with both graduate and undergraduate students, collecting data and studying the sun’s internal structure. Rhodes and his students examine the sun’s wave oscillations, in a manner similar to that employed by seismologists who monitor waves caused by earthquakes, to learn about Earth’s interior. 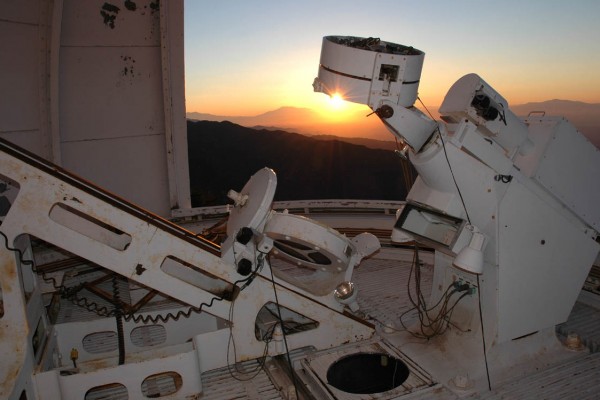 Stephen Pinkerton’s research suggests that the alignment of the optics at Mount Wilson Observatory’s 60-Foot Solar Tower has changed only slightly over the years since George Ellery Hale’s time in 1907. (Photo/Steve Padilla)

The tower was designed by solar astronomer George Ellery Hale to provide an image plane that did not rotate throughout each observing day. However, preliminary analyses in 2007 of a portion of this archive suggested that the focal plane of the tower might actually be rotating slowly.

If confirmed, Pinkerton’s demonstration that any such instrumental rotation is considerably smaller than those early estimates suggests that the alignment of the optics has changed only slightly over the years since Hale’s time in 1907. This possible rotation of the image plane was uncovered through the computation of subsurface flow maps using the ring-diagram method of local helioseismology.

The judges have their say

“I’m very happy that Stephen was selected for this honor, since it recognizes both his growing skill as a solar physicist and his ability to explain his complex topic to the judges clearly and concisely,” Rhodes said. “I’m not surprised that Stephen received this award since he has demonstrated an exceptional ability of communicating difficult scientific concepts to non-scientist students while he has served as a teaching assistant here at the university.”

About 20 entries from across the country were judged on readability, flow, quality of appearance and proportion of independent work done by the student. Judges also took into account the oral presentation by the student, how well the conclusions lined up with the aim or purpose and the overall quality of the work.

“Mr. Pinkerton did quite well in all of these categories,” said Kathy Reeves, who oversaw the AAS-SPD contest. “In particular, the judges felt that Mr. Pinkerton did a very good job of describing the work in oral discussions, the poster was well written and it had a very nice appearance.”

Operated by USC since 1984, the oldest working telescope at LA’s famous observatory helped solve the mystery of sunspots.

Solar storm and emergency cache shelters for the lunar base