On the first day, we sat in a room meditating for four and a half hours. With my eyes closed, it could have easily been seven hours — or two. It felt timeless.

This is how sociology major Sarah Newell described her arrival at a spiritist healing center in central Brazil. She had traveled there as part of a Problems Without Passports (PWP) course at the USC Dornsife College of Letters, Arts and Sciences.

Taught by Erin Moore, associate professor (teaching) of anthropology, “The Global Performance of Healing” allows students to learn about cultural anthropology by examining the practices of healing in other cultural contexts. As a case study, the class focused on spiritism, a healing modality in which mediums are said to channel spirits from other realms to deliver messages or instructions.

All healing uses the power of the mind to engage the body to heal.

“All healing uses the power of the mind to engage the body to heal,” said Moore, a cultural anthropologist with a background in medical anthropology. “People everywhere get sick and all societies have developed practices, technologies and medicines to treat illness. However, not all peoples understand sickness and healing in the same way.”

In June, Moore and her students traveled to Brazil for two and a half weeks of field work in addition to two weeks of classroom instruction at USC.

“We were not in Brazil to heal ourselves or to disprove anything,” Moore emphasized. “We were there to explore a culture — who believes and why do they believe?”

At a healing center just outside Brasilia, Brazil, students met with its medium, Valentim, and spent the day observing and asking questions.

The majority of the research, however, was conducted in Abadiânia, home to the renowned spiritist healer John of God, a trance medium who claims to channel 47 different entities — or disincarnate spirits — for the purposes of healing body, mind and spirit.

When the students visited the compound where John of God is based, the Casa de Dom Inacio de Loyola, they waited in line along with people from around the world who had come seeking physical or spiritual healing.

“I feel like I’m at a concert as everyone around me chants along with the performer on the Great Hall’s stage,” wrote Cristina Gago, a double major in human biology and health and humanity, in the class blog.

Meditation halls, silent gardens, therapeutic crystal baths, a pharmacy and a waterfall were available on the Casa grounds. Everyone dressed in white with the idea that it would allow the spirits to see their auras better. Visitors stayed in pousadas, simple bed and breakfast lodgings that serve three meals a day. 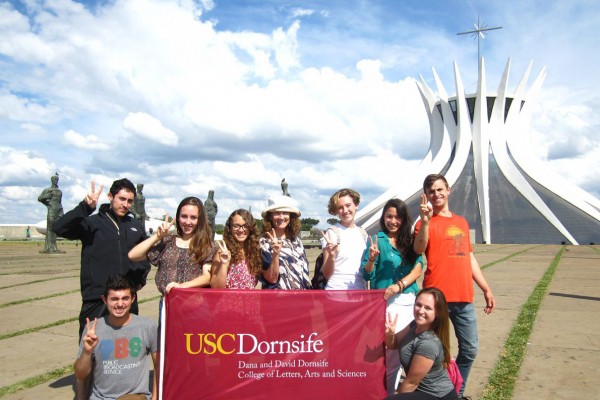 Students stand in front of the Metropolitan Cathedral of Our Lady of Aparecida in Brasilia, a planned city that replaced Rio de Janeiro as the capital in 1960. (Photo/courtesy of Erin Moore)

Senior Caitlin Sims, a double major in health and humanity at USC Dornsife and communication at the USC Annenberg School for Communication and Journalism, recalled her experiences at the Casa.

“As participant-observers, we walked the walk and talked the talk,” she said. “When we went to meet John of God, we all wrote down three issues we were having or things we wanted to work on, and it was translated for him once you got to the front of the line. Then he gives you some sort of prescription, and whatever he prescribed we did.”

Prescriptions generally involved some combination of passiflora herbal supplements from the pharmacy, sitting in silent meditation for varying lengths of time and then visiting him again the next day.

Meditation sittings, a primary healing practice at the Casa, lasted anywhere from 3.5 hours to five or even six hours.

“It was a challenge for all of us, but a good one to experience,” Sims said. “The idea is that people in the meditation rooms are focusing on positive, healing energy, which John of God says he feeds off of to channel the spirits. That energy is also said to transmit to others there who need healing.”

Many students decided to try what is known as a spiritual “surgery,” or spiritual intervention, which entailed sitting quietly with a group, eyes closed, in a small meditation room. Then the healer told them to cover the parts of the body where they wanted to direct the spirits.

Participants were then required to go home and sleep or rest for 24 hours in a darkened room. Food had to be brought to them and Moore took away all their electronic devices.

“I could not speak, listen to music, read or write the entire time,” recalled senior Oliver Hayward, also a health and humanity major. “I could only eat in silence, stand up to go to the bathroom and sleep. But by the time I agreed to this, I was respectful of the ways of the Casa. I decided to let go of my insecurities and truly participate.”

During the second week, the focus shifted to a critical analysis of the Casa rituals. Students collected stories about healing from patients, volunteers and purported mediums. The group also met with the author of a book about John of God.

“We interviewed a lot of people, those seeking healing and volunteers who had been living there for decades,” Sims said.

While in Brazil, the class also had the opportunity to tour the capital city of Brasilia, Rio de Janeiro and the old Portuguese colonial town of Pirenópolis. In Rio, they visited beaches, Corcovado and Sugarloaf Mountains, the Christ of the Redeemer statue and also got a guided tour of the favelas, the Portuguese word for slums.

The course resonated with students, many of whom have plans to enter the health care field.

“I decided to take this class because eventually, after graduation, I want to spend time in Africa or South America giving medical aid or conducting research of some sort,” Hayward said. “I knew the Brazil trip would really give me a taste of how the healing process works in other countries.”

Moore reflected on what she wanted students to take away from the experience.

“The most important thing is that students learn open-mindedness and understand that how they see the world is only one way, based on their education, gender, cultural background and ethnicity. Others are experiencing their worlds based on their own backgrounds.”

For graduate Elyse Pollack, there’s nothing better than being a Trojan

Do you believe in the power of healing?