Ooids are sediment grains generally composed of calcium carbonate formed on the sea floor. They fascinate geologists because they have appeared throughout the planet’s evolutionary history.

Traditionally, earth scientists never considered whether these tiny grains may have been formed in part by living organisms — after all, rocks are not alive.

My research provides insights into how the earth’s materials are formed and could potentially change our perception of its history.

But with the emerging field of geobiology, scientists from both the earth and life sciences are coming together to ask new questions and challenge one another to think outside the traditional confines of their expertise.

“My research on ooids provides insights into how the Earth’s materials are formed and could potentially change our perception of its history,” said Olivia Piazza, a Ph.D. student in earth sciences at the USC Dornsife College of Letters, Arts and Sciences.

Piazza recently attended the 11th International Geobiology Summer Course administered by the USC Wrigley Institute for Environmental Studies, housed at USC Dornsife. “We don’t have the results of our tests yet, but what we find will be meaningful.”

The planet’s past, present and future

In all, 15 graduate student and postdoctoral researchers from throughout the world participated in the interdisciplinary summer program, which takes a hands-on approach to exploring Earth and its biosphere. The program combines earth science and biology to look at how life leaves an imprint on the planet’s chemistry and its mineral deposits. It examines how those interactions have affected the planet’s past and present — and how they may affect its future.

Researchers arrived from home institutions in countries as far away as Sweden and Switzerland to participate. The program took place from June 8 to July 10.

“For me, geobiology is the fundamental understanding that life affects the Earth and Earth affects life — but that’s an area that resides in the classic divide between the fields of biology and geology,” said Frank Corsetti, professor of earth sciences and director of the course. “The previous lack of collaboration among biologists and geologists has only prevented researchers from discovering what is most important in understanding the intricacies of our planet.”

This summer, participants collected and examined samples of mainly water and sediment from Little Hot Creek in California’s Mammoth Lakes and Nevada’s Walker Lake. Working in laboratories, they observed the geological and biological properties of the samples.

The course culminated with two weeks at the USC Wrigley Marine Science Center on Catalina Island, where participants conducted analyses of their discoveries while collaborating with peers and professors to get multiple perspectives from scientists with different academic training.

“The class has a foundation built on the camaraderie and trust forged during a field-study experience — a trip that brings students and instructors together in a way that only field work can,” said William Berelson, chair of the earth sciences department at USC Dornsife and founding director of the geobiology course.

On Catalina, participants and their instructors became a close-knit community — swimming together, working side-by-side and discussing science in the communal dining hall over dinner.

“It’s pretty common that you’ll see a student and three faculty members sitting together discussing a science question,” Berelson said. “One major takeaway is for our students to be able to look at a professor’s academic path and say, ‘I could see myself doing that.’ ”

“Participants presented their own research and project findings to the group, but also developed short ‘elevator talks’ about the implications of their work meant for the general public.”

Corsetti even deemed the course a “language class” in which scientists learn to break free from the confines of their respective disciplines and gain deeper understandings of what is important to researchers in different fields.

“The class is about learning how to operate in an interdisciplinary setting surrounded by folks with diverse scientific and cultural backgrounds and ask the right questions,” he said.

Although the geobiology summer course is not primarily skills-based, Piazza said that some of the lab techniques she learned will be invaluable.

“I had never extracted DNA before this course, so now I will be able to do it myself when I go back to my own lab,” the earth sciences student said. “This means that I won’t have to outsource these analyses and will be able to oversee and interpret my data from start to finish.” 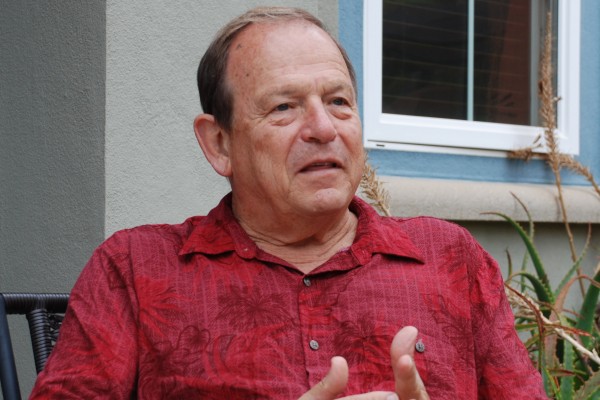 Kenneth Nealson, considered by many to be a founding father of geobiology, describes the evolution of the International Geobiology Summer Course. (Photo/Letty Avila)

Kenneth Nealson, holder of the Wrigley Chair in Environmental Studies and professor of earth sciences and biological sciences — an instructor in the summer course — is considered among the founding fathers of the field of geobiology.

“When I worked at NASA, they had coined the term astrobiology, and I used to say that it was just geobiology with a license to work elsewhere,” said Nealson, who has served as a lecturer and mentor in each year’s course since its inception.

The Agouron Institute, a nonprofit organization that supports innovative scientific and technological research, is the course’s most significant funder.

“This course has already had a huge impact on the field, and it will continue to do so,” Nealson said. “I think we are arguably the best geobiology program in the world because of the breadth of our faculty.”

Lewis Ward, a doctoral student in evolutionary biology at the California Institute of Technology, was inspired to attend this year. Woody Fisher, his mentor at Caltech and a 2004 participant in the geobiology summer course, had credited the program with allowing him to see geology and biology as part of a more holistic picture.

“There are so many things we learn about the history of life on Earth that you can only learn through geology,” Ward said. “I really only get to see these interpretations through other people’s backgrounds. That’s what is so unique about this course. I think you need at least some skills in both in order to ask the right questions, and ultimately, practice good science.”

What came first: the bipedal human ancestor or the grassland encroaching on the forest?

Investigations into life’s footprint on the planet spurs future reseachers