Long before applying to the Doctor of Physical Therapy program at USC, Jordan Perry had set a personal goal to compete in the Ironman World Championships in Kona, Hawaii.

Little did the 27-year-old marathon runner realize his studies at the USC Division of Biokinesiology and Physical Therapy — and an association with faculty member Todd Schroeder — could one day help bring his triathlon dreams to life on the big island.

The journey began during the spring 2013 semester when Perry, who was working on an ongoing research project that happened to share space with Schroeder’s Clinical Exercise Research Center, wore a triathlon T-shirt to the lab.

Perry had been a marathon runner, but did he really have what it takes to swim 2.4 miles, bike 112 miles and run a full 26-mile marathon as part of the competition?

Seeing the shirt, Schroeder jokingly asked, “So you do triathlons? Do you want to go to Kona?”

Did he have the right stuff?

The two began discussing Perry’s aspirations and weighing the steps Perry would need to take to qualify for the event’s world championships. Nothing came of the conversations at first. Perry had been a marathon runner, but did he really have what it takes to swim 2.4 miles, bike 112 miles and run a full 26-mile marathon as part of the competition? 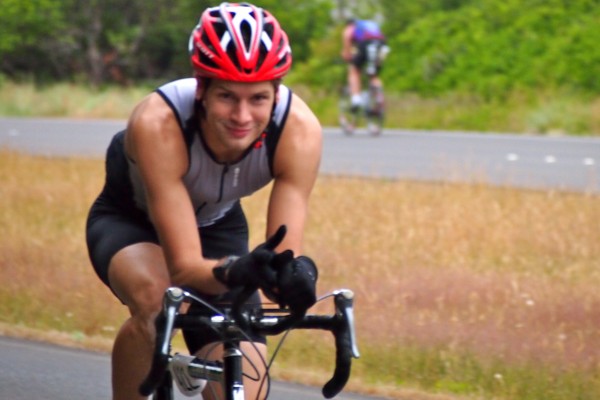 The answer came during Schroeder’s exercise physiology course. As part of their second-year course work, students get the opportunity to perform a maximal oxygen consumption test. The VO2 max test measures the maximum amount of oxygen that the body consumes during exercise and shows an individual’s physical fitness level and how he or she might perform during an endurance event.

The results showed Schroeder that Jordan was not only serious about competing in triathlons, but that he had the physiological potential to succeed as well.

Looking ahead to more competition

During the next few months, Perry and Schroeder worked out the details of what a sponsorship from the Clinical Exercise Research Center would entail. And Jordan began training hard to compete in the half-Ironman as the center’s first sponsored athlete.

After swimming 1.2 miles, biking 56 miles and then running 13.1 miles in early July, Perry had some great news to share with Schroeder and the Clinical Exercise Research Center.

“Won my first race sponsored by Dr. Todd Schroeder and the @USCCERC. Thanks for everything! #70.3 #triathlon,” Perry posted to his Instagram account on July 13 after completing the triathlon in 4 hours and 35 minutes.

With a win under his belt, Perry is now looking ahead to the Toughman Half Championship in New York and ultimately qualifying for the Ironman World Championships in Kona.

He also aims to use his triathlon experience to the benefit of physical therapy research, retesting his maximal oxygen consumption test to see how five months of triathlon-specific training has affected his cardiovascular fitness. There is also potential for a partnership with outside companies and to conduct various research projects utilizing the Clinical Exercise Research Center and triathlon-specific training equipment.

Biokinesiology program is one of first in U.S. to offer physical therapy doctorate

The USC Division of Biokinesiology and Physical Therapy officially launched its $5 million campaign initiative on 0ct. 18, the largest undertaken for a physical therapy program in the United States.

Swimming, biking, running: It’s all in a day’s work for DPT student