A Los Angeles team of scientists and surgeons from Keck Medicine of USC, Children’s Hospital Los Angeles and Huntington Medical Research Institutes (HMRI) reported that sound registered in the brain of a deaf Canadian boyfor the first time after doctors activated a hearing device that had been surgically implanted in his brainstem.

It was magical. He’s a tough kid.

Auguste Majkowski, 3, is the first child in the United States to undergo an auditory brainstem implant (ABI) surgery in a U.S. Food and Drug Administration-approved trial supported by a National Institutes of Health clinical trial grant. On June 12, six weeks after surgery at CHLA, the device was activated with positive results at the Department of Otolaryngology – Head & Neck Surgery clinic at Keck Medicine of USC.

“It was magical,” said Sophie Gareau, the child’s mother. “He’s a tough kid.”

The surgery, device activation and future behavioral study are part of a five-year clinical trial in which 10 devices will be implanted in deaf children under the age of 5 and studied over the course of three years. The Los Angeles study, co-led by audiologist Laurie Eisenberg and surgeon Eric Wilkinson is the only in the United States to be supported by the NIH.

“Our Los Angeles-based team has been at the forefront of ABI technology development since it came into use in the late 1970s for adults, so it is especially gratifying to help break the ‘sound barrier’ once again; this time, for children who previously could not hear,” said Eisenberg, a professor of otolaryngology at the Keck School of Medicine of USC. “Surgeons outside the United States have been doing ABI surgeries in children for 10 years, but there has never been a formal safety or feasibility study under regulatory oversight. Our team is writing the manuals for all the procedures for this technology, and we have a top-notch multidisciplinary team in place to carry out the research.”

The surgical team that performed the operation at CHLA included Wilkinson, HMRI research scientist and neurotologist at the House Clinic; HMRI research scientist and House Clinic neurosurgeon Marc Schwartz and pediatric neurosurgeon Mark Krieger of Division of Neurosurgery at CHLA. Attending the surgery was Vittorio Colletti of the University of Verona Hospital in Italy, who has performed the most ABI surgeries on children overseas and is a collaborator on the study.

“Hundreds of children in the U.S. can benefit from ABI surgery,” said Krieger, who also is associate professor of clinical neurological surgery at the Keck School of Medicine. “These children would otherwise never hear or develop verbal speech in their lives.”

A sound is heard for the first time

Majkowski was the first child accepted into the Los Angeles study. Thirty-six days after the May 6 surgery at CHLA, his parents watched as audiologists Margaret Winter and Jamie Glater, from the USC Center for Childhood Communication, activated the device implanted in the boy’s brainstem. When Winter delivered tiny pulses of electric current to the electrodes in his brain, the toddler lifted his head, indicating he heard a sound. 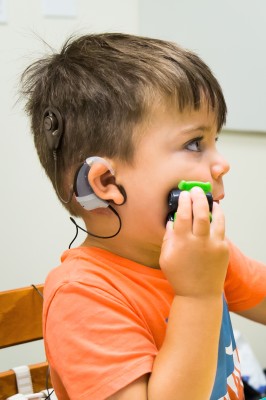 The child has been deaf since birth. At 22 months, he underwent a bilateral cochlear implant, which uses electrodes to stimulate auditory nerves, but the device didn’t help him hear because he doesn’t have a cochlear, or hearing, nerve. The boy traveled with his parents from Montreal to Los Angeles to participate in the clinical trial. The NIH grant covers the costs of the device, procedure and subsequent testing. To qualify for participation, patients must show that standard treatment such as hearing aids and cochlear implants have been ineffective.

During the six-hour surgery in May, doctors made an incision by the boy’s right ear and removed his right cochlear implant before implanting the ABI device on his brainstem. The ABI device has external and internal parts.

The external parts, which consist of a processor with a microphone and transmitter, transform sound into electrical signals and transmit the signals to an internal receiver that is part of the electrode array. The electrode array is placed on the cochlear nucleus of the brainstem. The procedure is considered revolutionary because it stimulates neurons directly at the human brainstem, bypassing the inner ear entirely.

The young children who had ABIs implanted outside the United States now have the potential to understand speech, but, in the United States, the device is FDA-approved for use only in patients 12 years or older with neurofibromatosis type II, an inherited disease that causes a non-malignant brain tumor on the hearing nerve. It has shown limited effectiveness in adults, however, and scientists believe that the device would be more effective in young children, when their brains are more adaptable.

The clinical trial will attempt to prove that this surgery is safe in young children and allow researchers to study how the brain develops over time and how it learns to hear sound and develop speech.

“The children in this study are under 5 years of age,” said Keck School of Medicine Professor Robert Shannon, an investigator for the trial and leading scientist in the development of ABI technology since 1989. “When a child is born, their ear is hard-wired for sound, but the brain has to learn how to perceive sound and speech from the information coming up the hearing pathway. If the ear is not providing sound information to the brain, the hearing part of the brain doesn’t develop properly. The ABI provides sound to these pathways so they grow and develop with the child.”

After the devices are implanted, the Los Angeles-based researchers will study how the brain develops over time as it incorporates sound and speech. If the clinical trial is successful, children across the country will be able to benefit from surgical and audiology techniques and safety and efficacy protocols developed in the study.

Keck Medicine of USC has opened the USC Center for Childhood Communication on the campus of John Tracy Clinic.