After an outstanding college, professional and Olympic career, Lisa Leslie ’97 has earned her place in the Women’s Basketball Hall of Fame. As a member of the 2015 class of six inductees, Leslie will be formally inducted on June 13, 2015 in Tennessee.

Leslie is one of the most decorated women’s basketball players in the game. Retired from an illustrious career in the WNBA with the Los Angeles Sparks, Leslie first made a name for herself at USC.

As a Trojan, she was the National Freshman of the Year in 1991 before going on to help lead USC to a Pac-10 title while also earning the highest of honors for herself.

A three-time All-American (1992-94), four-time All-Pac-10 team selection (the first player in Pac-10 history to be so honored) and the unanimous 1994 Naismith National Player of the Year, Leslie finished her Trojan career with 2,414 career points and 1,214 career rebounds. She remains USC’s all-time leading shot blocker and also ranks as the Trojans’ No. 3 leading scorer, No. 4 in free throws made and in rebounding, and No. 8 in all-time steals. 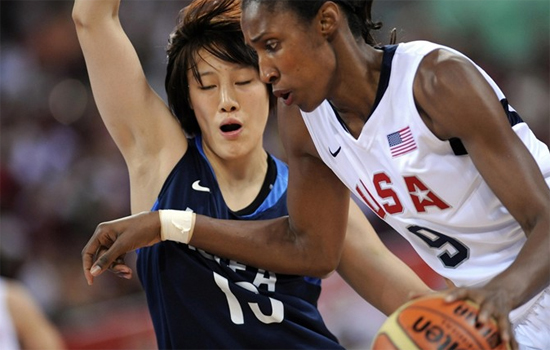 Lisa Leslie drives on a Korean player in the 2008 Summer Olympics. (Photo/WNBAfanclubs)

As a freshman, Leslie led the country in scoring and rebounding, then became the first rookie in Pac-10 history to be named a first-team selection as well as the NCAA Freshman of the Year. She topped her resume at the 1996 Olympics, where she led the U.S. women’s team to the gold medal and repeated the feat in 2000, 2004 and 2008.

The WNBA’s leader in career points and rebounds, Leslie was named an All-WNBA first-team (eight times) and second-team (four times) selection in her 13 seasons with the Sparks, where she guided the team to WNBA championships in 2001 and 2002. Also a two-time Defensive Player of the Year, Leslie was selected as a Western Conference All-Star eight times with three All-Star game MVP awards.

On Nov. 10, 2006, USC officially retired Leslie’s #33 jersey, hanging it high in the Galen Center in a halftime ceremony of the USC women’s home opener.

Trojans haul away medals in swimming, track basketball, softball — you name it, it had a Trojan’s hand on it.

Klete Keller, Kaitlin Sandeno and Lisa Leslie are among the triumphant Trojans who competed for the United States.