USC hosted 53 top students and eight professors from Mexico as part of a new initiative with the government of Mexico. The group included students from the country’s oldest and most prestigious university, the National Autonomous University of Mexico, and several elite private and public universities. Carlos M. Sada, consul general of Mexico in Los Angeles, welcomed the inaugural group of students and professors at a reception held on July 18 at the University Club.

We at USC are delighted to partner with the Mexican government on Proyecta 100,000 and to continue to deepen our ties with Mexico.

Proyecta 100,000, an initiative established to send 100,000 Mexican students to study in the United States and 50,000 U.S. students to Mexico by 2018, is part of a bilateral forum for education, innovation and research collaboration undertaken by President Barack Obama and Mexico President Enrique Peña Nieto. “We at USC are delighted to partner with the Mexican government on Proyecta 100,000 and to continue to deepen our ties with Mexico,” said Anthony Bailey, USC vice provost for global initiatives.

Students and professors are enrolled in a variety of programs at USC, including the newly launched USC International Academy, the USC Viterbi School of Engineering, USC’s Division of Biokinesiology and Physical Therapy and the USC School of Pharmacy. The collaboration comes on the heels of a USC visit by a delegation from Mexico’s Ministry of Foreign Affairs in the spring, during which President C. L. Max Nikias met with Foreign Secretary José Antonio Meade and Undersecretary for North America Sergio Alcocer. It builds upon an established USC summer research internship program designed and led by USC Viterbi Professor and Mexican native Francisco Valero-Cuevas. Now in its fifth year, the two-month program invites outstanding undergraduate students to be mentored by USC faculty. 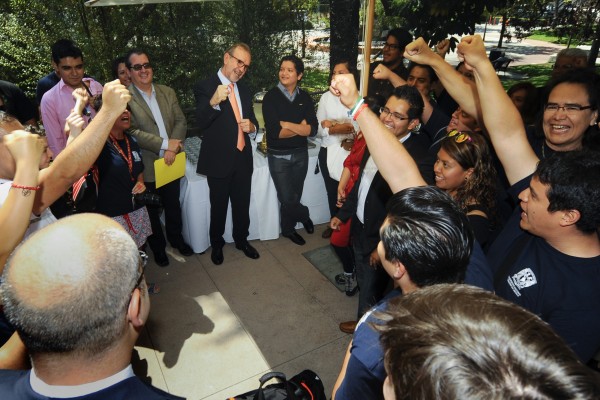 Carlos M. Sada leads a cheer with students during a reception at USC. (USC Photo/Gus Ruelas)

USC’s strong Latin American ties include partnerships with leading institutions of higher education as well as joint scholarships with Mexico’s National Council on Science and Technology; the Brazilian Federal Agency for Support and Evaluation of Graduate Education under the Ministry of Education; Chile’s National Commission for Scientific and Technological Research; and Columbia’s COLFUTURO Foundation, among several others. Operating an office in Mexico since 2005 and another in Brazil since 2013, USC continues to forge partnerships and host top students from Latin America. A USC presidential delegation to Mexico City is planned for the 2014-15 academic year to further relationships between USC and Mexico.

USC and Mexico align to boost opportunities in education and innovation

Mexican officials’ visit is the latest in a recent series of high-level agreements centering on USC.

USC Price has signed an agreement with Mexico’s National Council of Science and Technology to establish a joint program of graduate fellowships.

142 years old, and still fighting on

From a modest start, the university marks its 142nd birthday as one of the nation’s leading research institutions.