First Lady Michelle Obama and Los Angeles Mayor Eric Garcetti spoke about an aggressive plan to eliminate veteran homelessness citywide at the Unite for Veterans Summit, a partnership between the USC Price School of Public Policy, United Way of Greater Los Angeles and the Federal Reserve Bank of San Francisco.

“With our war in Iraq over and our war in Afghanistan drawing to a close, thousands of men and women who risked their lives for this country are transitioning back home, and we cannot make the same mistakes for this generation as we made in the past,” Michelle Obama said at the summit, held at the Hyatt Regency Century Plaza.

In the opening remarks, Elizabeth Garrett, USC provost and senior vice president for academic affairs, described the ways the university strives to create the most supportive environment for its nearly 900 enrolled student veterans and continues to advance research that will help them as they return home.

“Creating effective solutions to the challenges that many veterans face requires research, scholarship and conversations involving broad perspectives,” Garrett said. “USC has long been committed to advancing academic programs and partnerships with business and civic leaders that are focused on expanding opportunities for veterans and their families.” 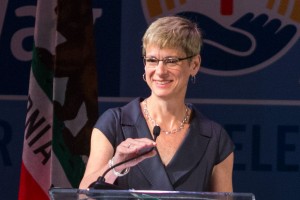 Providing excellent veteran services and expanding scholarships for student veterans is of particular priority at USC Price, which last year hosted a national veterans affairs conference at the University Park Campus to address the urgent needs of returning soldiers from Iraq and Afghanistan. Garcetti and retired Gen. David Petraeus, a Judge Widney Professor at USC with a joint appointment at USC Price, served as the keynote speakers.

To build on that conference, USC Price held a fundraising event in April that raised $128,000 in scholarship funds for its undergraduate veterans and ROTC reserve officers. The U.S. Department of Veterans Affairs provides support to veterans, but for private school education it typically covers only about half the costs.

Jobs and homes for vets

The summit featured two plenaries focusing on best practices in employment and housing of veterans. Raphael Bostic, director of the Bedrosian Center on Governance and Public Enterprise at USC Price, moderated the housing discussion.

Housing is an important component to all of this because if people are housed well, that is one less thing they have to worry about,” said Bostic, who previously served in the Obama Administration as assistant secretary for policy development and research at the U.S. Department of Housing and Urban Development. “They can focus more on jobs and on getting the skills they need to succeed.” 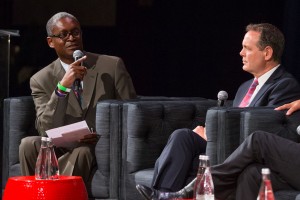 Over the past three and a half years, Home for Good, a joint initiative of the United Way of Greater Los Angeles and the Greater Los Angeles Chamber of Commerce to end chronic and veteran homelessness in the LA region, has moved more than 9,000 veterans off the streets and into permanent housing. Christine Marge, director of Home for Good, said it will take every sector — the business community, nonprofits, veterans affairs, philanthropists and the broad public sector — coming together to harness their collective energy in order to reach the absolute zero goal.

During Garcetti’s address, the mayor pledged to end veteran homelessness in the city of Los Angeles by the end of 2015. It’s a bold goal considering LA has more homeless veterans than any other city in the nation. And countywide, one of every eight homeless people is a veteran.

LA as a welcoming city

Veteran support is an issue of personal importance to Garcetti, whose grandfather Salvador Garcetti served in the U.S. Army during World War II. One of his first actions after being elected last year was to open an Office of Veterans Affairs in LA for the first time since the second world war. He recently launched 10,000 Strong, one of the most ambitious hiring initiatives at the local level in the country, to have 10,000 veterans hired in Los Angeles by 2017. More than 100 companies have pledged to help reach that goal.

“As your mayor, as a former Navy reservist, as grandson of a World War II hero, I will not accept that veterans can live in our city without a place of their own,” Garcetti said. “… Our servicemen and women have stormed the beaches, marched into enemy fire, flown into hostile airspace and patrolled dangerous waters, but for too many today the front line is the storage unit they live in or the car they call home, it’s the sidewalks and the streets of this city or the freeway underpass where they have to build a place that makes them feel safe.”

In the employment plenary, Carmen Moch, senior group vice president at Target, said the two days of intensive training on entering civilian life and restarting their careers that servicemen get upon leaving the military is not sufficient. She suggested an outplacement center that starts trying to line people up with jobs three months before they get out of the military, having them job ready with an offer in hand much like what happens for many college students.

In addition, Obama urged any business or organization interested in hiring vets to sign up at the Department of Veterans Affairs’ jobs site.

Elise Buik, CEO of United Way of Greater Los Angeles, closed the summit by announcing it would commit nearly $3 million to fund veteran-serving organizations that will provide job training and placement and calling attendees to action.

“Working together with Mayor Garcetti, businesses and our partners, we will connect 5,000 veterans with meaningful jobs,” she said. “We need businesses to commit to hiring veterans, and we need individuals to volunteer just a few hours of their time. Three hours of your time can make a huge impact in a veteran’s life and just think about how much they’ve given to protect each and every one of you.”

The Veterans and ROTC Students Appreciation Dinner is an opportunity for the university to honor its men and women in uniform.

The USC Price School of Public Policy hosted a conference Oct. 8 on the University Park Campus to address the urgent needs of returning veterans.

The president was recognized with the Ambassador for Humanity Award for his efforts to protect human rights, his commitment to education and his work advancing opportunities for all.