Dean Steve A. Kay and researchers at the USC Dornsife College of Letters, Arts and Sciences have created the first comprehensive library of genetic switches in plants, which will be available for scientists to use around the globe.

The collection contains about 2,000 clones of plant transcription factors — nature’s genetic on-off switches. The research that made the library possible, an eight-year process, is published in Cell Reports.

“They’re like smart missiles that go into the nucleus and bind to specific sequences of DNA,” Kay, corresponding author on the study, said of transcription factors. “They will regulate genes, switching them on or off, according to how that cell needs to respond to its environment.”

Clones of these “master switches” are contained in the “wells” of microtiter plates. The library will be sent to stock centers, which will distribute the plates to national and international scientists studying plants.

To those of us who stand in the aisle of the supermarket, it’s hard to believe there could be anything like a food shortage.

“We wanted to make a high-fidelity, gold-standard collection of transcription factors that’s going to serve the plant community all over the world,” said Kay, who researches circadian rhythms, or the biological clock, in plants.

The availability of these clones has great implication for scientists such as Kay, whose research sets the stage to design a more robust plant for future food security.

“Ultimately, this collection will help us understand at the molecular level the mechanisms of how plants work,” said Jose Pruneda-Paz, co-first author on the paper. Pruneda-Paz helped to create the library as a postdoctoral researcher, first in Kay’s laboratory at The Scripps Research Institute, then at the University of California, San Diego, where he is now a faculty member.

“By manipulating those transcription factors, we will be able to ultimately improve plant traits such as stress resistance or seed quantity and quality,” Pruneda-Paz said. “This is the larger goal.”

Kay elaborated: “Along the way we are going to understand the wiring — the instruction manual — for how plants grow and develop. From that knowledge base comes all the translational opportunities.”

The clones were taken from Arabidopsis, a flowering plant related to cabbage and mustard.

“You can think of Arabidopsis as the mouse of the botanical world,” Kay said. “In the same way we learn a great deal about human biology from flies and mice, we learn a huge amount about clock biology because Arabidopsis is a great plant to grow in the lab.”

The collection will help researchers in the underfunded field of plant research. Of all biomedical research, the federal government spends approximately 1 percent on plant research. 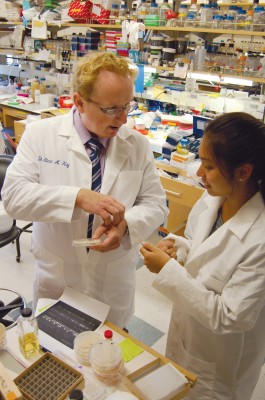 USC Dornsife Dean Steve A. Kay with a student in his lab (USC Photo/Emily Cavalcanti)

“Given how important food is to human health, that’s rather concerning,” Kay said. “Most people in the U.S. aren’t worried about starvation, but they are worried about dying of cancer. To those of us who stand in the aisle of the supermarket, it’s hard to believe there could be anything like a food shortage. It’s like climate change — it’s not often right in front of your eyes.”

Seeds for the research were planted in 2006

Pruneda-Paz and Ghislain Breton, another former postdoctoral researcher in Kay’s lab and co-first author of the Cell Reports study, recalled what led to the idea of creating a library in 2006.

Researching how plants adapt to light/dark cycles, they zeroed in on the production of CCA1 and LHY, transcription factors that regulate Arabidopsis clock genes. Traditionally, to figure out the function of a gene would be to mutate the gene and try to decipher whether those mutations were responsible for a certain phenotype.

But they were unable to find answers this way.

“So we decided to use this reverse genetics approach,” Pruneda-Paz said. “Rather than trying to do a mutation to find a gene, we could clone all the transcription factors and then figure out which transcription factors bind and regulate the expression of CCA1. For this, we started this collection.”

Breton and Pruneda-Paz oversaw the initial construction of the library. In 2010 when Breton left for an assistant professorship at the University of Texas, in Houston, Pruneda-Paz completed the project. To create the library, the team received National Institutes of Health grants and other grants for a total of approximately $5 million.

Pruneda-Paz and Kay finished the project at UCSD and USC, where they were aided by a robotic platform that can conduct thousands of experiments per day. Grippers at the end of a computer-controlled “arm” located at the center of this platform can grab a microtiter plate and move it to various stations necessary for an experiment.

“So the goal behind this was to build something that can be the foundation of many other projects,” Breton said, adding that already 70 research projects in the U.S. and Europe have resulted from the library. “It will not only be used for circadian clock research, but for many other plant biology projects in the future.”

The plant that came in from the cold

One study made possible by the library was published in Current Biology on July 7. In the research, Kay’s laboratory learned how plants regulate their gene expression in the cold. Using the library, they conducted tests isolating an interaction between two key genes — LUX and CBF1 — now known to be responsible for freezing tolerance in plants.

“We had very little idea how cold intersected with the clock, and this really reinforced the idea that transcriptional regulation is key,” said Brenda Chow, first author on the Current Biology study, who will soon start a position at GenBank, a genetic sequence database in Maryland.

“The library has been very useful across the plant community,” she said. “Specifically for my project, it was a unique way to identify the interaction between CBF1 and LUX. It would have been very difficult to identify this any other way.”

A USC study has found a good reason to check the expiration date on market foods.

The 25 foods that will change your life can be found in any grocery store, said Patrice Barber, dietician for the University Park Health Center.

An air sampling method created by USC Viterbi researchers to measure air quality has been adopted by the Department of Homeland Security to better understand COVID-19’s spread.