I’m not a journalist, I’m not sitting in on high-level meetings and my Internet is not fast enough to allow me to do effective research, so I’m not an expert on the goings-on of Central Africa. But I do live in Cameroon, and I read late editions of The Economist, Time magazine and newspaper articles sent by my wonderful Grandma, and that counts for something. What I’m saying is — disclaimer — don’t take my word as gospel.

Fact is, Cameroon is surrounded by countries with problems. It has six neighboring countries: Nigeria, Chad, Central African Republic, Congo (not Democratic Republic of), Gabon and Equatorial Guinea. Five of these have State Department travel warnings attached, and I have heard that Equatorial Guinea refused to let several Peace Corps volunteers cross the border into their country.

I can testify that I feel safe, surrounded by Cameroonian neighbors and co-workers who care about me, but it remains a question on all of our minds.

Let’s take a closer look at these neighbors.

The Central African Republic (CAR), which borders Cameroon to the east, is host to an ongoing war between Muslims (primarily located in the northeast part of the country) and Christians. In a recent book review, The Economist compared the country to Congo as one of the world’s most ignored and obscure conflict-ridden countries.

Muslim rebels, called Séléka, toppled the CAR government last fall, then continued to perpetrate violence. The violence continued even after their leader, Michel Djotodia, formally disbanded them in September 2013. In response, a Christian militia called anti-balaka (anti-machete in a local language) has begun exacting revenge — not only against Séléka members, but against Muslims in general. More than a fifth of the population has been displaced — and many have crossed the border into Cameroon, especially in two regions: eastern Adamawa and the east.

Nigeria recently became the largest economy in Africa, overtaking South Africa by a significant leap — and this might be great for trade. However, it does not reflect the shoddy infrastructure, incredible difficulty of starting or running a business, or massive inequality which plague the country. Despite oil wealth, most of the population lives in absolute poverty.

Furthermore, the Nigerian government is plagued by Boko Haram, a primarily Muslim organization opposed to Western intervention — especially in education and religion. I personally suspect that the existence of Boko Haram is a testament to this massive inequality and dispossession felt by northern Muslims far from economic and government centers. And the Nigerian government has failed to deal with this, first on a military level. An Economist article criticized Nigeria’s army as “losing a brutal fight in the country’s north against Boko Haram … failing to stem oil thievery on a gargantuan scale in the south. And its foreign peacekeeping … has been lackluster.”

Secondly, the Nigerian government has failed to tackle the Boko Haram issue on a general public level — because how could the general public support an organization that shuts down their schools, kills their neighbors, kidnaps their children and threatens their daughters? The Nigerian government, or at least government forces, are also culpable in the people’s suffering. And in Cameroon, the general public blames the Cameroonian government for letting Boko Haram members stage attacks across the border. To be fair, said border between Cameroon and Nigeria is porous in the (West) Adamawa, north and extreme north regions; Boko Haram members do move into and act in Cameroon. There have been at least two incidents of Westerners being kidnapped since I arrived in September 2013. 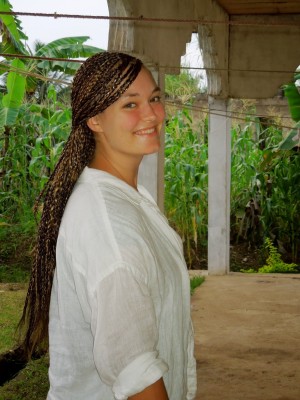 Rebecca Braun had her hair weaved, which helps keep her cooler in the heat. (Photo/courtesy of Rebecca Braun)

Chad, Congo and Gabon have their own problems, but we Peace Corps volunteers are not allowed to travel there because of instability.

So what does all this mean for Cameroon and for Peace Corps volunteers here? I can testify that I feel safe, surrounded by Cameroonian neighbors and co-workers who care about me, but it remains a question on all of our minds.

Before my staging group arrived, the extreme north region was temporarily closed. This is unfortunate because it is the poorest and thus the Peace Corps could potentially accomplish the most good there; also because it’s home to the most impressive nature park in the country, Waza, where you can still see lions and awesome wildlife. But that’s where kidnappings have happened, so it’s a no-go.

Since my pre-service training, there have been increasing rumors of Boko Haram’s presence in the north and in West Adamawa. In addition, there were temporary problems in the east and the eastern Adamawa, due to refugees arriving from CAR. Volunteers no longer travel north of Ngaoundere (the capital of Adamawa, where one can find wonders like an ice cream parlor), except those posted north of the city.

Decisions loom ahead for volunteers

So all of us face a decision, especially those closest to areas touched by neighbors’ conflicts. Should we continue working, despite the knowledge that we may have to leave these co-workers and neighbors and half-baked projects? Should we go home or should we move to areas farther from conflict?

I am committed to my work as the peer educator at a girl’s camp, teaching about HIV and sexually transmitted infections prevention, and encouraging volunteerism to empower Cameroonian youth.

I keep working as if there are no problems, but I hate not knowing what will happen! How can I mentally prepare for the unknown? As my Dad pointed out to me, that’s life: uncertainty.

In the meantime, I wish reporting — and awareness — was better concerning African countries, both their conflicts and their successes. What can we do about that? We can become more aware.

The increasing awareness of Nigeria’s Boko Haram marks some improvement, notably with the #BringBackOurGirls movement joined by first lady Michelle Obama. But that is only one conflict among many, only one crime perpetrated by one group. Each “terrorist” organization, even Boko Haram, has legitimate grievances and causes underlying their actions. If we study the causes, rather than blasting the individual tragedies in the Twitter-sphere, perhaps we can prevent such future events.

If we know what is happening in the world, if we know that its impact does reach us across oceans in unexpected ways — only then can we instigate change, whether by donating time or money, by appealing to our government or any other means available to us. But first, as Professor of International Relations Steve Lamy would say, we must “have the courage to know.”

Fight on for peace!

Rebecca Braun, who in 2013 earned her bachelor’s in international relations from the USC Dornsife College of Letters, Arts and Sciences, is currently a Peace Corps volunteer serving in Cameroon and working on youth development. After returning home at the end of 2015, she plans to pursue a master’s degree in international relations/security studies or work at an NGO or think tank in Washington D.C. Find more of her thoughts on and experiences in Cameroon on her blog: Life Uncaged.

Analyzing the African diaspora through the lens of sounds

USC Dornsife Assistant Professor Edwin Hill explores the African diaspora on both sides of the Atlantic in his book Black Soundscapes White Stages.

A summer in Mozambique is not usually part of the required writing class at the USC Marshall School of Business.

Lessons from the USC Rossier School of Education’s doctorate in education program really are without borders, and knowledge from the Ed.D. program is transforming schools around the world.

Educating leaders to deliver better services in Africa and beyond

War and peace in West Africa