When Masako Kusayanagi Miura graduated from the Keck School of Medicine of USC in 1941, the certificate she received congratulated “him” on “his” accomplishment. Since she was one of only two women graduating alongside 45 men, she brushed it off as an honest mistake.

Miura, who celebrated her 100th birthday on June 29, may be the oldest living Keck School alumna and possibly its most humble.

“I guess I got in because I got pretty good grades,” said Miura, who was an undergraduate at USC, refusing to acknowledge how tough it was for women to attend medical school at that time.

Miura graduated from medical school just a few months before Japan bombed Pearl Harbor. In 1942, she and her then-husband, James Goto, also a Keck School graduate, were sent to an internment camp for Japanese-Americans for the duration of the war.

They ran the hospital at Manzanar, a camp in California’s Owens Valley, with five other doctors, all Japanese-American internees. 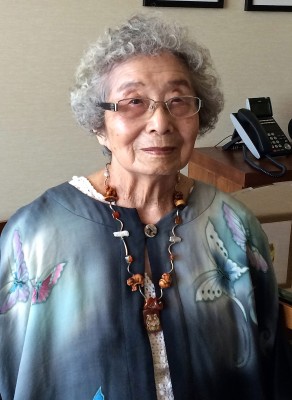 “There were seven doctors for 10,000 people,” Miura said. “We were always working.” They dealt with every kind of illness and injury, even the gunshot wounds of the internees who were injured in Manzanar’s riots.

Miura recalled one tricky problem she faced involved a patient with tertiary syphilis demonstrating symptoms of mental breakdown. Miura induced him with typhoid to raise his temperature, hoping the fever would kill the syphilis.

“It worked,” she said, simply.

At the close of World War II, Miura and Goto returned to Los Angeles and ran a medical practice in Little Tokyo.

“They let people pay them however they could — boxes of celery or a bag or peaches,” recalled their daughter, Denise Kodani, noting their patients were mostly Japanese-Americans just released from internment.

After many years in private practice, Miura went on to specialize in dermatology. She continued practicing medicine almost until her 80th birthday.

Although she now lives in Northern California, Miura has never forgotten her roots. At least once a year she flies south to attend Half Century Trojans functions.

More than 70 physicians and urologists in the Las Vegas area gathered to learn more about innovative diagnostics and treatment for urologic diseases.

Asked why he decided to provide tuition assistance for medical student Antonio Olivarez during his four years at the Keck School of Medicine of USC, Michael Mertens said, “I feel I’m at a time in my life when I need to give back.”