Lights low, the meditation room gives off an aura of peace. After removing their shoes, the students quietly file in. Each stands before a zafu, or meditation cushion, placed on top of a zabuton, or square mat.

Guided by a meditation leader, everyone bows toward the mat and then again, turning 180 degrees clockwise. Sitting cross-legged atop their zafus with the smell of incense around them, the group settle in for a silent session of zazen, or sitting meditation.

The students are participating in the Maymester class “Introduction to Buddhist Literature: Ancient Texts and Contemporary Buddhist Life,” taught by Lori Meeks, associate professor of religion and East Asian languages and cultures. They recently visited the Zenshūji Sōtō Mission, a Japanese Sōtō Zen Buddhist temple in Los Angeles’ Little Tokyo district. Prior to the meditation, Rev. Shūmyō Kojima gave the group a tour of the temple and spoke about his personal experiences as a Zen priest.

“Interspersed with class meetings focused on foundational texts, we went to actual Buddhist communities and tried to learn how they use these texts today,” Meeks said.

Field trips took students to local temples of a variety of Buddhist traditions, including Thai, Vietnamese, Chinese and Japanese. Instead of exams and papers, students were asked to conduct independent, field-based research to familiarize themselves with a Buddhist community. Students chose a temple and visited it at least three times, interviewing both laypeople and monastics.

The rumors are true

Rising senior Mara Guevarra enrolled in the class after hearing “so many positive things” about Professor Meeks. The double major in East Asian area studies at USC Dornsife and animation at USC School of Cinematic Arts had some experience studying Buddhism and wanted to learn more.

“I was really interested in the research component of this class, to experience learning about a specific community here in LA,” she said.

In her major, Guevarra focuses specifically on Korean studies, so she gravitated toward Korean Buddhism. She visited several traditional Korean Buddhist temples before being referred to the Dharma Zen Center, which is oriented toward those who want to study Korean Buddhism and practice meditation but aren’t necessarily Korean, like Guevarra.

Facing a language barrier with the older Korean generation, Guevarra adapted her research focus to Americans who have converted to Buddhism. In her project she explores why they’re drawn to the belief system and how Korean Buddhism changes when tailored to a Western perspective. She also considers how the community at Dharma Zen Center aligns with the Korean American community overall.

Rising sophomore Anthony Casadonte, a physics major at USC Dornsife, has always been interested in Buddhism.

“Visiting temples for my research for this class, I’ve participated in zazen several times,” he said. He’s been conducting research at the Zen Center of Los Angeles, comparing its approach to that of Nichiren Buddhism. He learned about Nichiren through USC’s Soka Gakkai Buddhist Association group. 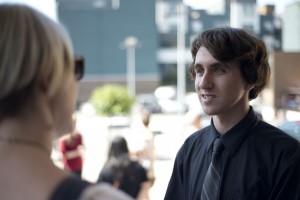 Zen is rooted in personal responsibility and an emphasis on what you can develop in yourself, but Nichiren Buddhism is based on having faith in the tradition’s ability to benefit you through the practice of chanting, he said. This is one distinction between Buddhist sects, an emphasis on self-power versus other power.

“At the Zen Center, it’s a mostly older, Caucasian population. Some people live there, and everyone is very serious about their practice,” Casadonte said. “Ultimately, Zen is a practice more than a philosophy or any type of ideology.”

Sociology major Javorius Allen is a rising senior on the USC football team who was voted the team’s most valuable player after his redshirt sophomore season. He was able to draw connections between Buddhism and his personal passion, playing sports.

“I know a football player in the NFL who is Buddhist, and he applies it to his everyday life,” Allen said. “Buddhists talk about living in the moment and focusing on what’s here and now. I feel like a lot of guys who play football or other sports could use this teaching.”

Allen talked about how players could apply this philosophy to stay focused after making an error or a bad play, helping them return to the moment, not dwelling on what just happened.

“What I really wanted students to take away from the class is an understanding of how diverse the Buddhist tradition is,” Meeks said. “Many Americans imagine Buddhism to be a single, unified tradition. While there are important continuities that link Buddhist communities across time and space, it’s important to recognize the very distinct ways that different groups interpret and practice certain core teachings.

“There is also a longstanding tendency in religious studies to approach a tradition first and foremost through the textual analyses of its scriptures. I wanted my students to study some of the foundational texts of Buddhism, but I also wanted to help them think in a broad way about how different communities use these texts in different ways.

“Different Buddhist traditions commonly draw on or emphasize different texts, for example, or they may interpret the same texts in very distinct ways. Moreover, Buddhist texts are put to a variety of uses: They may be chanted or copied for devotional purposes, and depending on the community, personal study of the scriptures may or may not play an important role in one’s identity as a Buddhist. We miss a lot if we attempt to study Buddhism — or any religious tradition — through textual study alone.”

Dalai Lama of Tibet speaks at USC for first time

Happiness – the basic human goal – depends upon good ethical conduct, regardless of one’s religious beliefs, said the 14th Dalai Lama during his first visit to USC on May 3.

After years of reading the enlightening words of His Holiness, Mary Ellen “Jem” Jebbia finally had the opportunity to listen to the powerful words spoken by the Dalai Lama on May 3.

Born in Tokyo to a Japanese Buddhist mother and a British Christian father, Duncan Ryûken Williams believes it is his destiny to serve as a bridge between the religions and cultures of his upbringing.

Students meet the many faces of Buddhism in Los Angeles