Donald Miller is among the Trojans leading the effort to document the 1994 genocide in Rwanda.

Miller, professor of religion and sociology at the USC Dornsife College of Letters, Arts and Sciences and executive director of the USC Center for Religion and Civic Culture, is writing a book based on 260 interviews with orphans and widows who survived the Rwandan genocide. He has visited Rwanda 16 times and describes the country as a second home. The book’s working title is Silent Tears: Trauma, Healing and Hope in Post-Genocide Rwanda. 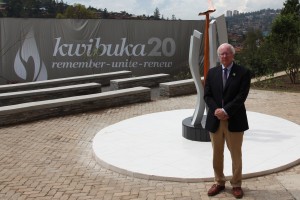 Donald Miller stands next to the Kigali Genocide Memorial in Rwanda. (Photo/courtesy of Donald Miller)

“The last 100 interviews, which were videotaped, focused on ways in which survivors have attempted to reconcile with perpetrators of the violence against them and in some instances actually forgive the killers,” said Miller, who also asked survivors about the role of religion during the genocide and later in their healing process.

“Religion cuts both ways for survivors since priests sometimes collaborated with the killers,” he said. “Also, many survivors felt abandoned by God. And yet in the healing process, religion and the power of a loving community has sometimes been extremely important.”

“Some remain imprisoned by their past — and for understandable reasons. But many are having their vengeance on the perpetrators: They are succeeding. They are building new lives.”