Earlier this year, as Rwanda prepared to commemorate the 20th anniversary of the most painful period in its history, a single flame crisscrossed the central and east African sovereign state.

The flame symbolized remembrance, as well as the resilience and courage of Rwandans over the past two decades as they try to come to terms with the genocide in which Hutu extremists killed between 500,000 and 1 million ethnic Tutsis and moderate Hutus in approximately 100 days.

Commemoration shouldn’t just be a reflection on the past, but should also involve rethinking of what those events mean in the present and within a learning environment.

Carried in a simple lamp, Urumuri Rutazima — the eternal flame of memory — traveled to communities in Rwanda’s 30 districts, before arriving in the capital of Kigali. There, on April 7, Rwandan President Paul Kagame used it to light the National Flame of Mourning. This marked the launch of Kwibuka20, the international commemoration of the 20th anniversary of the Rwandan genocide.

Stephen Smith, executive director of USC Shoah Foundation — The Institute for Visual History and Education, and adjunct professor of religion at the USC Dornsife College of Letters, Arts and Sciences, was part of the team that came up with the commemoration. As executive producer of Kwibuka20, Smith is responsible for running nearly 230 commemoration activities worldwide.

“As it’s the 20th year, we wanted to engage the whole Rwanda community, so we created an eternal flame of memory, which was carried like an Olympic torch throughout Rwanda so everyone could play a role in the commemoration and talk about their lives and their communities, how the genocide impacted them and how they have recovered,” Smith said.

For the past 13 years, Smith has been deeply involved with post-genocide reconstruction, reconciliation, education and commemoration. Before joining USC Dornsife in 2009, Smith worked in Rwanda for many years, co-founding The Aegis Trust, which helped establish the Kigali Genocide Memorial Centre in Rwanda in 2004.

As part of Kwibuka20, Smith helped create a series of “Global Conversations” focusing on prevention in which world and community leaders came together to talk about the implications of genocide in terms of world politics. The series kicked off at the United Nations headquarters in New York on Jan. 15, followed by talks in Washington, D.C., London and Addis Ababa, Ethiopia.

In Rwanda, Smith worked on an international forum on genocide, hosted by the Rwandan Parliament from April 4-6. More than 200 delegates participated, including parliamentarians, policymakers, scholars and media personalities.

“The legacy of the genocide in Rwanda created a struggle to restore human dignity at individual, community and national levels,” Smith said. “The conference offered an important opportunity to discuss enduring challenges of justice, education and reconstruction with experts from around the world. It was a chance to look at how Rwanda managed its re-emergence from genocide so we can learn from it and apply it to other societies in conflict today.” 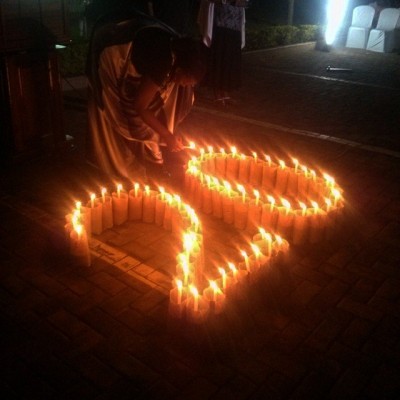 The eternal flame of memory was used to launch Kwibuka20. (Photo/courtesy of USC Shoah Foundation)

On April 7, as many as 25,000 people, including Kagame and other world leaders, gathered at a Kigali stadium to hold a candlelit vigil and witness a dramatization of the genocide performed by 800 actors. The event was marked by displays of intense grief.

Nearly 10,000 miles away at USC, members of the Shoah Foundation Institute Student Association held their own vigil, reading survivor testimonies and distributing pictures of victims during the 100 days of terror.

“Our on-campus vigil was reflective of what was happening around the country,” Smith said. “It was good to see the USC student body taking the lead and showing how it’s done.”

Under Smith’s leadership at the institute, Rwandan genocide witness testimony is being integrated into USC Shoah Foundation’s Visual History Archive for use in research and education programs.

Along with Kings College, London, and the NIOD Institute for War, Holocaust and Genocide Studies in the Netherlands, USC is working with the Kigali Genocide Archive to build a digital system to preserve more than 60 million genocide documents and make them publicly available.

In 2011, Smith brought officials from the archive and education departments of the Kigali Center to USC for training. As a result, the Rwanda center has built new archival systems and education programs based on the institute’s work.

Smith is also working with the Rwanda Peace Education Program to teach tolerance using the methodology and archive of the USC Shoah Foundation and is helping the Rwandan government review its genocide education curriculum.

“Commemoration shouldn’t just be a reflection on the past, but should also involve rethinking of what those events mean in the present and within a learning environment,” Smith said. “Through research and teaching at USC, we wanted to try to connect that memorial moment with the value and benefits of research and education.”

Rwanda testimony to be archived at USC

In a significant expansion of its archive, the USC Shoah Foundation Institute for Visual History and Education is launching a new effort to preserve and share video testimony from survivors of the 1994 Rwandan Tutsi genocide.

On a quiet hilltop in southern Rwanda is a panorama of captivating beauty: rolling hills, pastures, open sky and on the horizon, small farms and pastoral villages.

Stephen Smith, executive director of the USC Shoah Foundation, has been appointed the inaugural holder of the UNESCO Chair on Genocide Education.