The USC Schaeffer Center for Health Policy and Economics hosted the fifth biennial conference of the American Society of Health Economists (ASHEcon), bringing 800 health economists from across the country to USC for a comprehensive discussion of issues, including the future of the Affordable Care Act (ACA), innovative models in payment reform and how to use behavioral economics to alter patient and provider behavior.

“ASHEcon is the premier gathering of health economists interested in health policy,” said Professor Dana Goldman, director of the Schaeffer Center, a collaboration between the USC Price School of Public Policy and the USC School of Pharmacy. “It was great debut for the Schaeffer Center, where we got to feature all of our research and policy work from the past five years, and put it in front of health economists, government officials and others interested in health policy.”

Faculty and students involved with the Schaeffer Center contributed to 61 presentations during the four-day event held on June 22-25.

John Romley, a research assistant professor at USC Price, contributed to seven sessions — presiding over the presentations on HIV and prevention economics, as well as vital trends in health care. Schaeffer Center Associate Director and USC Price Associate Professor Julie Zissimopoulos presented her research on the value of delaying Alzheimer’s Disease, while USC Price Assistant Professor Vivian Wu served as the discussant in several sessions related to health care costs. Erin Trish, a Schaeffer Center postdoctoral fellow, presented her research on how regulation of the small group market affects firm self-insurance and its implications for the ACA.

Alice Chen, who is joining USC Price as an assistant professor in the fall, won ASHEcon’s student paper award for her research examining whether the poor benefit from more generous Medicaid physician payments.

Goldman, who co-authored eight papers used in the conference, moderated a plenary discussion on innovative models in payment reform featuring the four Leonard D. Schaeffer chairs from across the country. Discussant Michael Chernew, Leonard D. Schaeffer Professor of Health Care Policy at Harvard Medical School, called it the most important policy reform going forward to maintain pressure on the fee-for-service model. Others agreed.

“I don’t think we have much argument in this room that we need an alternative for fee-for-service that will evolve over time to produce a higher quality of care at a sustainable cost and will be broadly acceptable to the patients, providers and taxpayers,” said Alice Rivlin, director of the Engelberg Center for Health Care Reform at the Brookings Institution.

There are many payment models being tested. Accountable care organizations are a pay-for-performance alternative in which a group of health care providers serve a group of patients and share in the savings if they can meet quality standards and reduce spending. Another option is to bundle payments that cover all health care services related to a procedure. These emerging payment models are works in progress with mixed results. 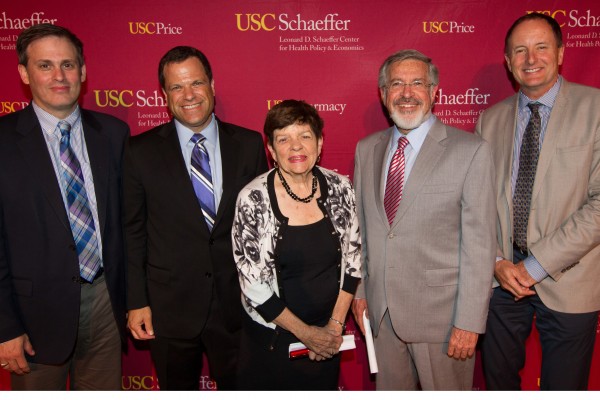 In a discussion on behavioral economics, Jason Doctor, director of Health Informatics at the Schaeffer Center, noted that another payment model — pay for performance — hasn’t been as effective as hoped, working only 25 percent of the time while causing nonincentivized areas to get worse.

One behavioral perspective is that providers are interested in how they are viewed by their peers, so that social influences can be as important as financial ones to improve patient outcomes. Doctor presented a study that applied this principle to antibiotic prescribing — giving clinicians monthly feedback on their performance relative to their peers — and found that it resulted in a significant reduction of inappropriate prescribing.

“These results that we’re getting suggest that the effects of nonmonetary incentives are substantial and should be taken seriously,” Doctor said. “Certainly we should also consider the larger social environment, how clinicians interact with each other and how that might affect their behavior.”

The opening plenary titled “The Affordable Care Act: What Have We Learned and What Is Next?” featured two economists with opposing viewpoints on the future of the ACA.

Casey Mulligan, an economics professor at the University of Chicago, said the ACA will shrink the labor market by 3 percent and reduce the gross domestic product by 2 percent. He projects that by 2017, the labor market will be between a half percent and quarter percent smaller.

“If you’re going toward quite a bit smaller, Congress reacts to that,” Mulligan said. “They look at the economy going south, and they’re going to want to do something. Is it going to be to light the ACA on fire or to double down with more assistance for unemployed and poor people?”

Peter Orszag, an executive at Citigroup who previously served as director of the Office of Management and Budget for the Obama administration, was more optimistic about the ACA and also touched on payment reform.

He cited a slowdown in Medicare spending this year, which he attributed to providers anticipating the movement away from the fee-for-service structure, the digitizing of systems and movement toward a defined contribution model in employer-sponsored insurance. Today, about 90 percent of health payments in the United States are fee-for-service, but Orszag expects that to go down to 40 to 60 percent within three years.

Health care and the White House

When it comes to what issues voters want to hear more about from presidential candidates, health care ranks second only to the economy.

Is music in tune with alternative health care?

Friday Lilly will be presenting a proposal in late June to use traditional Indian music to help relieve anxiety in patients undergoing chemotherapy.