Master of Public Administration students at the USC Price School of Public Policy brought lessons from the classroom to bear on local and global challenges through recent capstone projects.

Required for completion of the MPA degree at USC Price, capstones integrate the core knowledge, skills and values students acquired through their coursework with semester-long group projects working with clients from nonprofit organizations and government agencies.

Our office will continue to utilize their findings for years to come.

Each May, the school presents the John Randolph and Dora Haynes Foundation Recognition Award to one outstanding MPA capstone project. This year’s winning report addressed open government data, while the runner-up focused on the California Green Bank Initiative. Both projects were completed by students in the online MPA program.

For the first-place capstone group, advised by Professor Dora Kingsley Vertenten, students Willie Marquez, Kody McConnell, Eric Rubalcava and Holly Shaftel provided a blueprint to the Los Angeles City Controller’s office on how to handle open government data. Controller Ron Galperin was so pleased with the work that he showed up at the USC Price annual awards ceremony to present each student with scrolls of recognition from the city.

“The report prepared for us by the Price School graduate students was impressive in its depth and detail,” Galperin said. “The city of Los Angeles is grateful for the excellent work produced by this group. Our office will continue to utilize their findings for years to come.”

Using new technology and social media to provide more accurate and accessible information in a user-friendly package is a key local government municipal issue moving forward. The group had three components to its project: review of academic and professional research literature, an internal stakeholder analysis via a Web-based survey sent to city staff and a comparative practice analysis of what is being done in five other major cities.

“We were asked to do something that’s novel and in an emerging public policy arena that hasn’t had significant research or theoretical models available to apply to our project,” said McConnell, who works as an analyst at the Department of Public Works and Utilities for the city of Edmonds in Washington. “There was a lot of creativity required to put together our report and that was the unique opportunity of our project.” 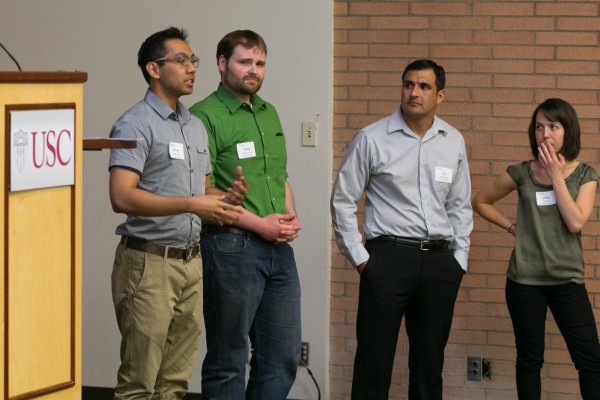 The runner-up capstone also was done for a local client, but it centered on a problem of global relevance. Former California Gov. Arnold Schwarzenegger, who now chairs the USC Schwarzenegger Institute for State and Global Policy housed at USC Price, approved a law in 2006 to mandate reduction of statewide greenhouse gas emissions to 1990s levels by 2020. To meet this order, the California Clean Energy Fund (CalCEF) is exploring development of a “green bank” to spur public-private investment in clean energy projects.

Working under faculty advisor Bill Leach, students Harry Douglas, Shrujal Joseph, Jenny Uhrich and Ladell Nicole White reported to CalCEF that the existing California Infrastructure and Economic Development Bank may serve as a replicable model for a California Green Bank, despite clean energy projects tending to be smaller investments with higher risk. They also suggested that the Green Bank could even be housed within the Infrastructure Bank.

This was only the second year of capstone projects for USC Price’s online MPA program, which launched in fall 2011. Uhrich said a main reason she decided to attend USC was that the academic rigor is the same whether you’re an online or on-campus student.

“I felt from the very beginning that we would have the same level of respect,” explained Uhrich, an assistant editor at the Journal of Family Social Work in Minnesota. “After taking the classes and seeing the amazing amount of work the professors put into it, how much work they put into teaching us and being available, I felt like I got the full experience.”

Four USC Price School of Public Policy graduates will head to New York for a year as recipients of the Clinton-Orfalea-Brittingham Fellowships.

Board of Supervisors recognizes the school’s efforts to train county executives.

The professor and chair of the Presidential Working Group on Sustainable Education, Research and Operations has brought his policy and environmental expertise to shape a universitywide initiative to educate a new generation of leaders.