Haiku poet Deborah Kolodji ’81 was recently caught in dense traffic on the freeway. As she looked up, a V-formation of birds flew overhead. Nearby, an airplane cut across the sky. Things were in motion.

Haiku helps you take little mental snapshots of your world.

Kolodji, who earned her bachelor’s degree in mathematics from the USC Dornsife College of Letters, Arts and Sciences, keeps a notebook tucked in her purse to capture these moments of inspiration. She fills them up quickly. 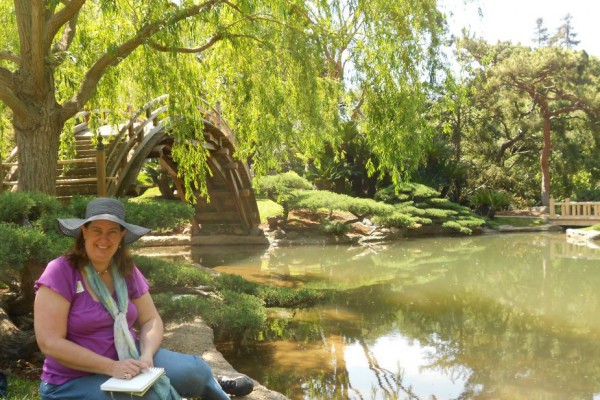 Deborah Kolodji finds inspiration for writing haiku during a visit to The Huntington Library. (Photo/courtesy of Deborah Kolodji)

Kolodji has published more than 800 poems in poetry journals and online magazines; she previously served as president of the Science Fiction Poetry Association. To date, she has published four chapbooks of poetry. In addition to haiku, she writes longer poetry and short stories.

She’s apt to tweet her haiku. Her Twitter page is a feed of sparse and evocative images.

In early May, she posted:

Typically a three-line imagistic poem of 17 syllables or fewer, haiku tend to focus on nature. Traditional forms of haiku create associations between two images and use a “season word,” or kigo, to anchor the poem in a specific time of year.

For instance, Kolodji’s poem from a 2002 issue of World Haiku Review embodied those principles, juxtaposing the vibrant blossoms of spring with a grandmother’s craft:

The art is in creating a haiku that, like a Japanese ink wash painting, conveys its subject in a few simple brushstrokes. People bring their own life experiences to the poem, and the magic is in the push and pull between what is presented by the poet and what is absorbed by the reader.

“A good haiku is universal,” Kolodji said. “That’s what I love about haiku. I write about moments that speak to me, and hopefully they speak to other people.”

Monthly meetings are open to all

Kolodji helps others immerse themselves in the art of haiku as moderator of the Southern California Haiku Study Group. The group meets on the third Saturday of the month at the USC Pacific Asia Museum.

Founded in 1971, the museum is located in a 1924 Chinese Qing Dynasty-inspired mansion. Its collection of more than 17,000 items from across Asia and the Pacific Islands spans more than 5,000 years.

In November 2013, the museum and USC announced a partnership that enhances the scholarship of USC creative faculty and students and provides a foundation for a museum studies and curatorial training program at the university.

The haiku study group is free and open to the public. Monthly meetings are devoted to studying, writing and sharing haiku.

On occasion, Kolodji will lead the group in ginkos, or haiku walks. They visit locations throughout Southern California, such as the Los Angeles County Arboretum and Botanic Garden, The Huntington Library, Art Collections and Botanical Gardens and the Bolsa Chica Ecological Reserve.

Nature walks can be inspirational

“Walking around in nature is a perfect inspiration for writing haiku,” Kolodji said.

The group also participates in local events dedicated to haiku. In 2013, the study group co-hosted the bi-annual conference for Haiku North America, the largest and oldest gathering of haiku poets in the United States and Canada.

Leading up to the event, they ran a booth devoted to haiku at the 2013 Los Angeles Times Festival of Books. Visitors could purchase books of poetry and create haiku with the help of seasoned poets.

This past year, Kolodji led an introductory haiku workshop at the book festival for Kaya Press, a nonprofit publisher of Asian and Pacific Islander diasporic literature, housed in USC Dornsife’s Department of American Studies and Ethnicity.

The event provided Kolodji with the opportunity to share her passion with a broader audience and to spend time on campus, which she calls “her happy place.”

Kolodji said she benefited greatly from the breadth and depth of her liberal arts education.

“I always feel that USC was a really important part of transitioning me into a wider world, said Kolodji, who continues to capture that world one snapshot at a time. One recent afternoon she noticed a group of high school athletes in their sports gear leaving a popular Southern California burger joint. The local bird life cawed in the distance. She tweeted:

A Pianist With a Penchant for Poetry

The renowned Alfred Brendel visits campus to share an unexpected side of his talent.

An inspirational look at poetry

Like it or not, most people take work home with them. Mary Helen Immordino-Yang, a neuroscientist and educational psychologist at USC, takes inspiration from home to work.

The Gioia of poetry

“La Vie Bohéme” may be romantic, but even poets need to eat. Solving that dilemma is something many artists don’t give ample consideration early in their lives, said Dana Gioia.

The eloquent art of haiku