As True Blood drinks its last drop for its seventh and last season, the USC School of Dramatic Arts caught up with the HBO series’ Deborah Ann Woll BFA ’07, who plays teenage vampire Jessica Hamby.

What has the journey been like working on True Blood? 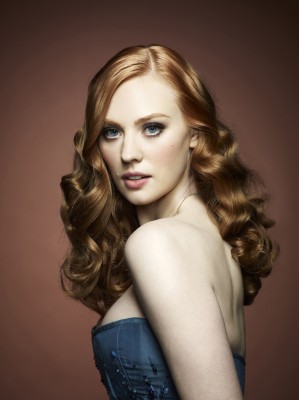 First, an amazing learning experience. I have had the opportunity to work in every possible circumstance that this profession could throw at me. Stunts, prosthetics, CGI, animals, etc. I can’t imagine anything a future project could throw at me that I haven’t already done in some capacity. And secondly, I have made some of the best friends here. This is a family that has laughed and cried and suffered and relied on each other for seven years. It will be the bar by which all others are measured.

Tell us about your character and what’s in store for her in the final season.

Be a dork, be a smarty-pants, and always compliment and encourage good work in others when you see it.

Jessica is a 17-year-old vampire from a very strict family. After being made vampire, she struggled a lot with her darker impulses and her self-esteem. At the end of last season, she had just committed the worst mistake of her life and was at her lowest point, convinced she was a monster. This season, she looks for a way to atone for her wrongs and, if possible, forgive herself.

As an artist, did you face any challenges in playing the role of Jessica?

Plenty. As a perpetual teenager, Jessica is a constant whirlwind of hormones and emotions. It’s a constant challenge to keep up with her. Especially these last few years as they have taken Jess to very dark places. It’s my responsibility to go there, too, and try to portray those feelings as genuinely as I can. That takes a lot of work and a lot of courage. Hopefully, I’ve been able to get close on occasion.

How has your training at the USC School of Dramatic Arts helped you in your career thus far?

USC taught me to be a great actor. That’s all you can do. Commit and practice and continuously ask more of yourself. At school, I learned how to push myself to strive for even greater heights. I acted as much as I possibly could in an environment without the pressure of the industry and was therefore confident in my abilities by the time I started working professionally.

Do you have any advice, as a working artist and alumna, for students?

Just be the best you can be at your chosen profession and keep striving. Whatever it is, don’t settle, don’t phone it in, don’t allow the “too cool for school kids” to make you doubt or lose your focus. Be a dork, be a smarty-pants, and always compliment and encourage good work in others when you see it.

What do you have planned next?

I have a pretty cool project in the works but am not allowed to talk about it so unfortunately I can’t say what it is. However, outside of that I’m excited to have more available time in the next few years to go back to theater. I’ve missed it.

Stage and screen performer Gates McFadden will rely on mime and movement as the George Burns Visiting Artist in the USC School of Theatre.

From actress to activist

In 2002, when America Ferrera was a freshman studying international relations at the USC Dornsife College of Letters, Arts and Sciences, she was torn between two possible career paths.

Just a month after receiving her diploma in May, Jane Lam was at work recruiting epidemiology analysts, research analysts and epidemiologists for L.A. County Department of Public Health.