A team of biologists affiliated with the USC Wrigley Institute for Environmental Studies is working on a $1.2 million study of marine organisms that are the microscopic equivalent of the Venus flytrap.

The organisms are one-celled microbes that employ photosynthesis and predatory behavior to acquire nutrition, and the research team from the USC Dornsife College of Letters, Arts and Sciences is exploring this hybrid approach to microbial nutrition with the help of advanced gene sequencing and computational analysis.

We’re trying to understand how photosynthetic organisms such as algae and plants evolved.

“This is really fundamental research,” Caron said. “We’re trying to understand fundamental principles behind the way these organisms ‘make a living’ and how different nutritional strategies contribute to their existence and their evolution.”

Many marine microbes get their nutrition from photosynthesis — the use of sunlight to extract nutrients from the water. Other microbes consume microscopic plant and animal matter floating in the water. The microbes that are the focus of the study have meal plans that fall in between.

These organisms are called mixotrophs, and the research project is titled “Comparative Functional Analyses of Mixotrophy Among Microbial Eukaryotes.” The project is funded by the Gordon and Betty Moore Foundation through its Marine Microbiology Initiative.

The evolution of algae and plants

Caron emphasized the basic nature of the research.

This study of marine microbes might someday reveal information about the species that form harmful algal blooms.

“Many mixotrophs are bloom-forming organisms,” Heidelberg said. “Maybe this strategy allows them to dominate and out-compete other organisms under certain conditions. Our research will provide insights into the advantages of being a mixotroph. Any application of that would be a ways off, but you need this solid basic research as a foundation for moving forward.”

From synthesis to nutrition

Mixotrophy is widespread in marine microbial ecosystems, and Heidelberg said the project fits into a larger effort by the Moore Foundation to bring advanced genomic sequencing and computational analysis to the study of marine microbes.

“The Moore Foundation Initiative is completely changing our field,” Heidelberg said, adding that it is supporting the study of microbial transcriptomes — the evaluation of expressed genes under various environmental conditions.

The foundation has funded the sequencing and analysis of nearly 700 transcriptomes, in particular for many ecologically important species that have been understudied, Heidelberg said.

“In our case, we’re not just looking at gene expression and how microbial organisms are functioning; we’re looking at a specific example of that in the process of mixotrophy,” she said. 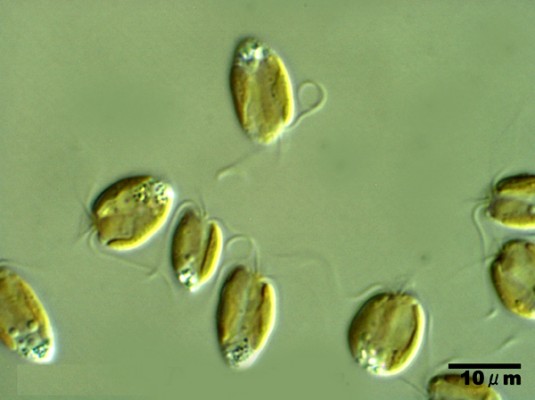 Prymnesium parvum, an example of the mixotrophs under study by USC Dornsife biologists (USC Photo/Karla Heidelberg)

That continuum is where mixotrophs find their meals.

“In a sense, this sounds like a perfect combination,” Caron said. “When they have prey, they can eat them. When they don’t have prey but they do have light, they can use photosynthesis. Our project is trying to figure out what they get out of these two types of nutrition, and why and when they favor one behavior over the other.”

The research team includes four graduate students in the Caron and Heidelberg labs, a postdoctoral researcher and a staff computational analyst.

The graduate students are Jennifer Cardell, Sarah Hu, Amy Koid and Alle Lie and all are enrolled in the USC Dornsife PhD Program in Marine Biology and Biological Oceanography.

The postdoctoral researcher is Ramon Terrado, an expert in marine microbial communities, who recently joined the USC Dornsife group after completing a PhD in biology and oceanography at the Université Laval in Québec, Canada.

The computational expert working with Caron and Heidelberg is Zhenfeng Liu. He joined the project in 2012 after receiving his PhD in biochemistry and molecular biology from Pennsylvania State University. Liu said the application of computational analysis to marine organisms is still in its early stages.

“Oceanography has been overlooked — we don’t have much knowledge compared to other fields,” he said. “The Moore Foundation is generously investing a lot of money to do sequences for several hundred marine microorganisms, including many mixtrophic species, so we will eventually get a lot of data back and have a much better understanding of this particular group of organisms.”

American Academy of Microbiology honors the USC College marine scientist for his work revealing microscopic denizens of the sea.

Marine Biologist Knows How to Navigate in a Classroom