It’s a good week for Trojan athletes past and present.

Samantha Bricio, an All-American on the USC women’s volleyball team, has joined the Pac-12 All-Star team on its trip to China. 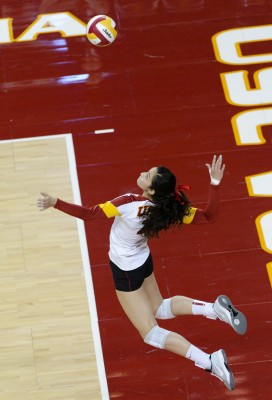 Bricio arrived in China on June 17 along with team members from all universities in the Pac-12. When the team is not competing on the court, it will visit the Great Wall of China, Tianamen Square, the Forbidden City and the Silk Market. Last year, USC was represented on the All-Star team by head coach Mick Haley, All-American Natalie Hagglund and senior Hayley Crone.

Smith, 24, is the 109th Trojan to play in the majors. USC has produced the most big-league players of any college program in the country. Smith, a right-handed reliever, was a 17th-round draft pick of the Tigers in 2011 shortly after undergoing Tommy John surgery.

Smith spent one season in Class-A ball, played in seven games at Double-A and 15 games at Triple-A Toledo. In his time at Toledo, Smith had a record of 4-2 with a 1.64 earned-run average.

The Tigers, a heavy favorite to win the AL East this season, have dropped to second place in the division behind the upstart Kansas City Royals.

Two Trojans are on the move