Eight exceptional students at the USC Dornsife College of Letters, Arts and Sciences have been selected for the prestigious Fulbright Fellowship awarded for academic achievement and commitment to cultural engagement.

USC has been recognized as among the top 40 research institutions in the United States to cultivate Fulbright Student Grant recipients, according to the Fulbright Program, the U.S. government’s flagship international educational exchange program. 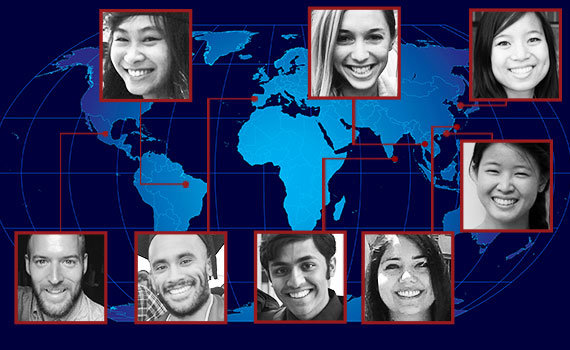 Forty-six USC Dornsife students have been named Fulbright scholars in the past five years. (Courtesy of USC Dornsife)

Established in 1946 and sponsored by the U.S. Department of State’s Bureau of Educational and Cultural Affairs, the Fulbright is the largest international fellowship program in the country. Each year, about 2,000 grants are given to support independent study, research and teaching in more than 150 countries worldwide.

In the past five years, 46 USC Dornsife students have earned this honorable distinction. The 2014-15 Fulbright recipients include: 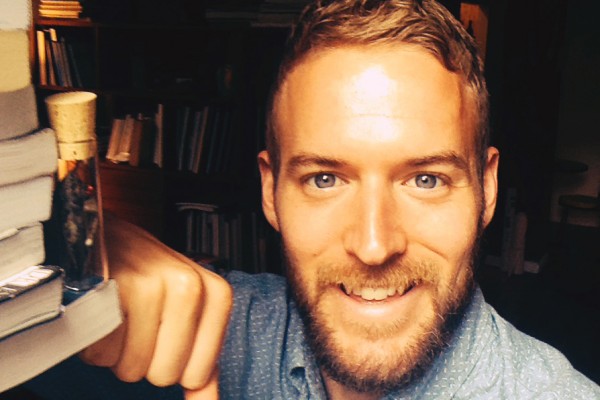 The shimmer and colors reflected by hummingbird feathers and mother of pearl were greatly admired in the 16th- and 17th-century Spanish Empire, which also encompassed colonial Mexico, some of the Philippines and other regions. With hues constantly changing in relation to the angle of observation and illumination, these prized objects were incorporated in clothing, ornaments and paintings.

Unlike colors produced by pigments, the rainbow-like iridescence is the product of tiny structures that refract light. Brendan McMahon, a PhD candidate in art history, has been studying how the early-modern Spanish world’s interest in the visual qualities of iridescence relates to intellectual debates of the period that centered on the validity of data gathered by the naked eye.

“Iridescent materials challenged the veridicality of sight because of the qualities of their shifting colors,” McMahon said. “At the same time, they implicated light itself as the primary mechanism of color, and of vision overall.”

McMahon will use his Fulbright to travel to Mexico to visit archives which contain written inventories from the period describing iridescent objects.

He also expects to learn from local experts.

“Building relationships with conservators and curators, as well as clergy members and private collectors who live with these items and interact with them on a daily basis will open up a whole new perspective on them,” McMahon said.

Five months after graduating in 2013, Samantha Freitag landed a job at Facebook. Working on the “child safety” team, she and her colleagues combed the website, screening and disabling inappropriate content.

“Working in the tech industry is great, but it was a hard job,” she said. “There was an overwhelming amount of bad content.”

More than that, she missed the international relations and cross-cultural subject matter she had studied as a USC Dornsife student. After eight months at Facebook headquarters in Menlo Park, California, she switched gears and accepted the Fulbright Teaching Assistantship in Taiwan she had applied for the summer after graduation.

As an international relations major, she chose to focus on Asia. Looking for something “super challenging,” she studied Japanese for a year before spending her junior year abroad in Tokyo, where she lived with a host family and studied the language intensively. Then, during her senior year back at USC, she took up Mandarin Chinese.

In Taiwan, where Mandarin is spoken, she will be teaching English to elementary and middle school students.

“Based on my own language experiences, I know it’s really cool to be able to speak to other people in their own language. As a teacher in Taiwan, I really want to show this to my students and get them excited about learning English.” 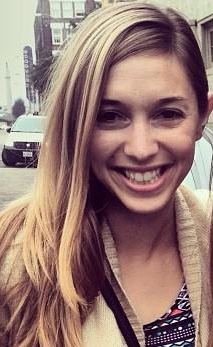 As a new summer school principal in New Orleans, Rebecca Ryan ’09 knows one thing that will thwart a dream from happening: the fear of failure.

“Being a principal has been a continual learning experience,” said Ryan, who earned her bachelor’s in neuroscience from USC Dornsife. She’s not too proud to seek out other leaders for support and advice.

“A big part of growing is making decisions and learning from my mistakes,” she said.

Ryan will bring all of her experience to Thailand, where she will teach in a northeastern province called Maha Sarakham. As a Fulbright scholar, she will work at Thakhonkang Pittayakhom School as a middle and high school English teacher.

She fondly remembers her time as an undergraduate and cites USC Troy Camp as a great influence.

“It introduced me to so many passionate people and charismatic children,” she said. “It also allowed me to work inside Los Angeles public schools and gain a perspective on education that has led me down my current path.” 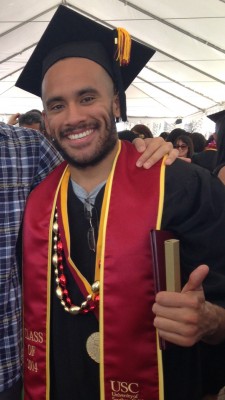 Taking a year off as an undergraduate at USC Dornsife, John Hernandez was hired as a tutor in Miami. A few months later, he secured a contract to work at a private Jewish school in North Miami, where he taught for the remainder of the year.

“The position made me fall in love with education,” he said. “The Fulbright teaching assistantship will be a great continuation of everything I’ve been doing.”

Hernandez graduated in May with a dual bachelor’s degree in mathematics and economics. A native Spanish speaker, Hernandez embraced the opportunity to travel to Spain, where he will teach at IE University in Madrid.

In addition to teaching, he will embark on an independent project that will draw on his economics and math background.

Hernandez eventually wants to work in developing countries in Latin America, where he will seek to improve educational technology.

“Even though Spain isn’t a developing nation, I want this experience to give me the confidence to jump into developing countries, make me feel ready to travel to places I’ve never been and give me a global understanding of the world.” 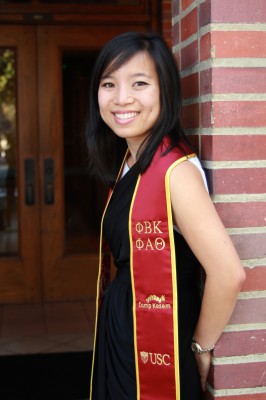 Growing up in Southern California, Bijou Diem Tran Nguyen ’14 was always intrigued by Korean American culture, from its food to its soap operas. As a history major at USC Dornsife, she had the opportunity for an in-depth study of the country. The course “Introduction to Asian American History” resonated with her.

“We learned about the experiences of different Asian cultures in America, that their experiences assimilating and adjusting to America were unique as a result of their backgrounds,” said Nguyen, who is first-generation Vietnamese.

This July, Nguyen will continue her exploration into Korean culture as she teaches English as a Fulbright scholar in Korea. After six weeks of training in Seoul, where she will learn teaching strategies and the basics of Korean language, she will be assigned to a classroom outside of the capital and will act as a cultural ambassador of sorts for the United States.

Upon her return, Nguyen will pursue her medical doctorate at the Keck School of Medicine of USC. She aspires to become a physician and believes her experience abroad will develop her independence, confidence and cultural empathy.

“I think what will make me a good health care provider is the way I cherish every interaction I have with others,” she said. “This respect and unconditional support is what I will bring to Korea.” 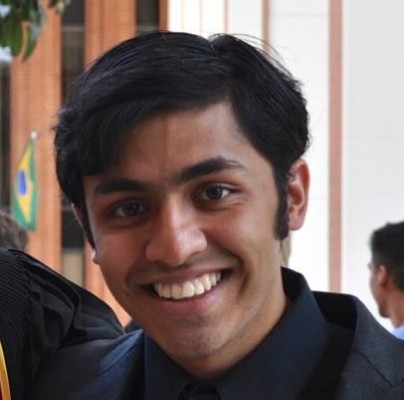 In November, Kumar will travel to Sri Lanka, where he will teach English as a Fulbright scholar.

Upon his return, Kumar wants to continue his studies in the international affairs of South Asia by pursuing either a master’s degree or PhD in international relations or public policy. His year abroad will help him decide what career to seek, whether in journalism, academia, working for a startup or in government.

“The Fulbright experience will be a great opportunity for me to develop my leadership skills and become a better teacher,” Kumar said. “This will be beneficial in any path I choose.” 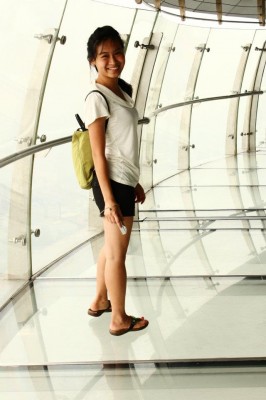 As a senior, Fan Fan ’14 practiced her Portuguese skills with a third-generation Japanese-Brazilian student from the American Language Institute (ALI) housed at USC Dornsife. They met weekly to practice speaking each other’s language. Fan, who was born in China but raised in Atlanta, also enjoyed helping him navigate American culture.

“I’d introduce him to popular student restaurants and talk to him about aspects of American culture you don’t learn in the classroom.”

Fan, who graduated in May, also served as an undergraduate consultant for ALI, working with international graduate students seeking to become teaching assistants. She helped familiarize them with American undergraduate culture so they could teach more effectively.

She will bring this spirit of cultural sharing to Brazil as an English teaching assistant at a teacher’s college.

At USC Dornsife, Fan spent a summer studying in China as a Global East Asia scholar and a semester abroad in Chile. She also researched local issues in Hong Kong with a Problems Without Passports class.

In her teaching role, Fan wants to connect her English students with Portuguese-language students at USC.

“They could talk with each other on Skype, or email questions back and forth about classes or their daily lives. I think it would be a great interactive element that would enrich the classes in both schools.” 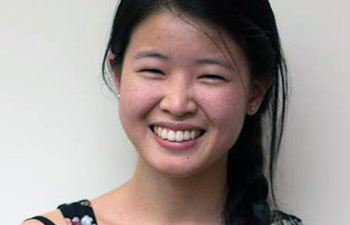 Vivian Yan’s Fulbright research project grew out of a Problems Without Passports trip she took last summer to Hong Kong and Macau.

“The trip allowed me to dive into the history and politics of these two postcolonial cities,” said Yan, a Mellon Mays Undergraduate Fellow who graduated from USC Dornsife in May with a double major in comparative literature and history.

As a Fulbright scholar, Yan will spend an academic year in Hong Kong examining the extent to which ethnic and social diversity shapes the ideologies created by political activism and exploring how these tensions create or destabilize ideas of Hong Kong identity.

Studying at the University of Hong Kong, Yan intends to use her Fulbright to create a foundation for graduate research in history or American studies.

She is particularly interested in the apparent dichotomy between the city’s pro-democratic stance and its often lamentable treatment of foreign domestic workers.

“I am interested in examining to what extent these pro-democracy movements in Hong Kong have an impact on activists campaigning for the rights of domestic workers.”

3 from USC win Fulbright grants for study in Europe

The students will travel to such distant lands as Kenya, Japan, Uruguay and China, where they plan studies of disparate cultures.