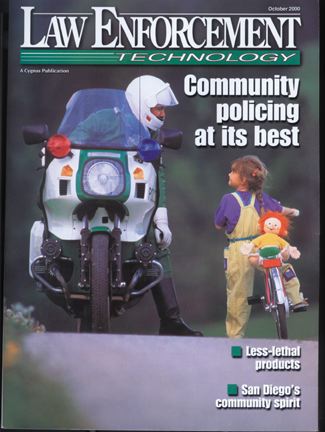 The October issue of Law Enforcement Technology praised USC’s Kid Watch program, describing it as “a local program [that] makes kids feel safer and brings the community closer” together. The article explained how to replicate Kid Watch, quoting community outreach specialist Samuel Mark, DPS Deputy Chief Robert Taylor and LAPD senior lead officer Randy Cochran. “I think if we just went out and gave decals and [neighborhood residents] never saw us again, the program would fail,” Cochran said. “There needs to be someone like USC that is constantly checking on the program to make sure that you’re involved.”

Business law expert Eric Talley was quoted Sept. 27 in a Wall Street Journal article on stock options. Disputes over stock options have opened up the “litigation floodgates in the last year and a half,” Talley said. “The stakes in these disputes are big – big enough to fight over.”

Telecommunications expert Michael Noll wrote an Oct. 2 op-ed for the online publication teledotcom.com, in which he argued strongly against ownership of American telecommunications by government-controlled or government-influenced companies. Noll testified at a Sept. 7 hearing before the House Subcommittee on Telecommunications, Trade and Consumer Protection on a related subject. “Telecommunication companies are licensed by the U.S. government to operate as broadcasters and common carriers using the public airwaves and rights of way. Clearly, such a license to the use of public property should not be given or sold to a company owned by a foreign government,” he said. Noll also wrote a Sept. 4 op-ed for teledotcom.com in which he whimsically recounted numerous nonsensical acquisitions, divestitures, spin-offs, and other telecommunication blunders in recent years. And Noll was interviewed several times in September and October by BBC Radio and East Coast broadcast media, mostly regarding the ups and downs of AT&T.

An Oct. 14 Los Angeles Times article chronicled the activities of USC alumnus and Cal Fed first vice president Raphael Henderson as he mentored two area teenagers on “Take a Youth to Work Day.” One, Ja’Quan Combs, 15, is a sophomore in USC’s Neighborhood Academic Initiative program. The teens wrote teller evaluations, counted money delivered by armored trucks and had a power lunch at the City Club with Henderson and an African-American doctor who told a skeptical Combs that there were more black surgeons than NBA players. Henderson told the teens that he oversees the bank’s assets. “’$1.5 billion, men,’ he tells the teenagers for emphasis,” said the article. Combs, impressed with the experience, told the Times “I’ve never had a day like today.”

David Marsh, an expert on standardized testing, was quoted in an Oct. 17 Los Angeles Times story on low test scores in schools with changing demographics. “There are going to be special circumstances where a school has done noble work and deserves to be recognized for it,” even when test scores decrease.

Transportation engineer James E. Moore II was interviewed by the Los Angeles Times for an Oct. 18 story about the imminent end of L.A.’s transit strike. Moore said that many riders had probably joined underground systems of fee-only car pools run by private drivers or were buying old, heavily polluting cars. Moore’s Oct. 15 Times op-ed article on the strike and contracting out bus service elicited a response from fellow transportation expert Randolph Hall. “Moore is correct in stating that the MTA should learn from the private sector,” said Hall. Using United Parcel Service as an example, he said: “Both labor and management can follow the example of successful companies in which labor and management work cooperatively toward the common goal of providing the best possible service at reasonable cost.”

Computer network expert Carl Kesselman was featured in an Oct. 21 story in New Scientist about the possibility that people someday will be able to tap into remote computing power much like they get electricity from the power grid today. “All the authentication, looking for appropriate data, software, space and payment will happen automatically, without us seeing it,” he said. The publication credited Kesselman and colleague Ian Foster from the University of Chicago with introducing the concept in 1996.

In an Oct. 22 St. Louis Post-Dispatch story on school funding, school finance expert Lawrence O. Picus said Missouri was way ahead of Illinois when it comes to creating an equitable school funding system.

After the second West Coast radar and flight-control malfunction in two weeks, airline safety expert Michael Barr defended the FAA in the Oct. 24 San Francisco Chronicle for taking steps to modernize its system. “When you’re talking about integrating software into a system as complicated as the air traffic control system, that takes a lot of time and money,” he said. “When one major center goes down, it has a ripple effect throughout the United States.” In a USA Today story on Oct. 12 about how airlines continue to ship flammable oxygen canisters despite new FAA rules in the wake of a 1996 ValuJet crash that killed 110 people, Barr told the newspaper that the math was simple. If the fine “does not prevent recurrence,” he said, “then it’s not big enough.”

In an Oct. 24 San Francisco Chronicle story on how the presidential election outcome could shape the U.S. Supreme Court, Erwin Chemerinsky, a constitutional law expert, said, “There are few constitutional issues now with more than a two-justice margin. Replacing two justices on either side could make all the difference in constitutional law.”

Political scientist Sheldon Kamieniecki was quoted in an Oct. 29 Los Angeles Times column about political ethics. Kamieniecki said that without tough ethics laws, politicians would be more unethical than ever. “There’s not much stealing going on these days, but they’re lying more,” he said.

In an Oct. 28 story about rail transit, urban guru Peter Gordon told the Vancouver Sun that “moving people from Point A to Point B 100 years ago was a wonderful idea. There was no better way of moving large numbers of people then than by fixed rail. But the modern city is not the same as the city of 100 years ago. It is much less dense, and peoples’ lives dictate that they be much more mobile.” In commenting on the transit strike, Gordon told the Oct. 29 New York Times that urban transportation models like Boston or New York make little sense in Los Angeles, where “origins and destinations are ubiquitous.”

The Oct. 29 Los Angeles Times Magazine featured Spirit of Troy’s well-loved and -feared director Art Bartner, “now in the 30th year of his remarkable reign, with his screaming-zealot image firmly intact.” The article pointed out the marching band’s long list of accomplishments (including recordings and movie appearances) as well as the price at which these accomplishments come: “While his students address him as Dr. Bartner to his face, they often use more profane nicknames elsewhere. But those same students voluntarily sweat, strain and strut for him, sacrificing nearly every other aspect of their college lives to play a part in what they call ‘The Greatest Marching Band in the History of the Universe.’ They both despise and revere the gravelly voiced 60-year-old man who might rage at them from the three-story-high observation platform they call the “God Tower,” and then a moment later wade into their midst to nimbly teach them the Charleston.” Bartner told the Times, “To me, there’s no difference between a practice and a game. In rehearsal, every time out, you’re there doing your best. I set unbelievable standards. … I want them to have the same drive I have.”

California is one of the few places where motorcyclists can legally “split” lanes of traffic. In an Oct. 30 San Francisco Chronicle story, emeritus safety expert Harry Hurt said, “For a motorcyclist, that’s the safest place to be. A lot of people think it’s a hazard, but the cold, hard facts are that it’s not.”

Milind Tambe’s Electronic Elves Project was the subject of an Oct. 30 USA Today feature. The story described Tambe’s team of eight self-learning, self-acting, computer agents that schedule and plan meetings for the research group at the Information Sciences Institute. Not only were the artificial-intelligence-based elves capable of amazing technical feats, they also got into elf-like mischief, canceling the group’s funding meeting with its director. But, Tambe said, “You don’t have to worry about elves gossiping.” Also quoted in the story was researcher David Pynadath.