Sophomore Taylor Osher was nervous. It was almost her turn to demonstrate the horseback riding skills she had been refining all year.

Osher and her colleagues on the USC equestrian team were competing at the Intercollegiate Horse Show Association (IHSA) Regional Championships at the Hansen Dam Equestrian Center in Sylmar.

To calm their nerves, Osher and a teammate grabbed a smartphone and searched YouTube for encouragement. They got fired up when they heard the dramatic sound of trumpets, then clangs of cymbals followed by a drum roll. 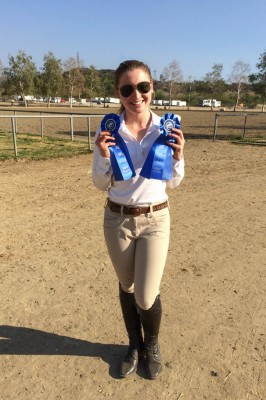 “We held up our two fingers in the air and started singing along with the Trojan Fight Song,” said Osher, a political economics major at the USC Dornsife College of Letters, Arts and Sciences. “When I was riding in that show, I was humming along with the song in my head. Getting the rhythm in my mind helped calm me down.”

On that weekend in March, Osher won two blue ribbons — first place. The victories contributed to her team’s overall success. The team placed first in the region, which encompasses IHSA college teams from Southern California and Arizona. “It was a really thrilling experience for us,” Osher said.

The equestrian team is made up of nearly 30 USC students, each with different levels of ability. They train one to three times a week during the school year with coach Kathryn Burdett Griffiths at Sunset Equine Farms in Shadow Hills. Griffith works with the students to perfect their riding techniques and teach them the bigger picture of horsemanship, including grooming, safety and, most importantly, how to communicate with a horse.

“You are working with an animal 10 times your size with a brain of their own,” Griffiths said. “You can’t out-muscle them or force them to do something. Riding takes mutual respect, finesse and above all patience.”

Team member Cadence Cisneros, a biological sciences major at USC Dornsife, has been riding since age 7. She sees the team as an exceptional way to improve her riding technique and compete with other college students across the nation. In addition to physical training, the sport also builds character, she said.

“Riding builds upon important personal qualities like confidence, assertiveness, dedication and a good work ethic,” Cisneros said. “Being a part of the show team and competing teaches good sportsmanship, listening and communication skills, and gives members the opportunity to flourish under pressure.”

Those skills translate to her education. The team requires a time commitment — including training and traveling to competitions in Southern California and Arizona. She balances her time with the team with her rigorous academic schedule.

Everyone is so encouraging and supportive of each other.

“Being a part of the team necessitates that you learn to manage your time and adopt diligent study habits so that you can succeed in the classroom,” Cisneros said.

Students are drawn to the club because of their love of horses and riding, but the camaraderie of the team also offers them a different view of what is typically an individual sport, according to team president Leah Raphael.

“Being on the team means your excellent rides in a show count toward the success of the team, which I originally thought would create tension,” said Raphael, a junior majoring in critical studies at the USC School of Cinematic Arts and communications at the USC Annenberg School for Communication and Journalism. “But in reality everyone is so encouraging and supportive of each other.

“No matter if you have the best round of your life or make a mistake, you come out of the ring and have 20-plus friends cheering and supporting you,” Raphael continued. “We all have the greater goal of the success of the team, which really brings us together and fosters some of the best friendships I have.”

Working hard for next year 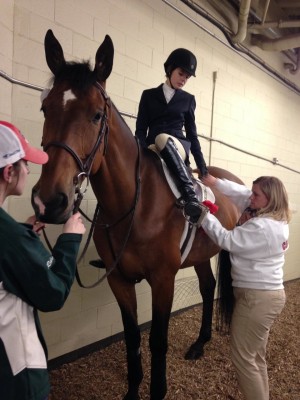 Regardless of whether team members are participating in a particular competition, it’s everyone’s duty to attend — a commitment that Osher counts among the team’s many opportunities to bond.

“It’s really fun,” she said. “We get up at 4:30 or 5 a.m. depending on where the competition takes place, we make our Starbucks run and then we go to the show.”

Cisneros said the impact of such a strong bond was made clear in the outcome of the regional competition. There, her riding qualified her for the next level of competition called zones. After that comes the national competition. Although the team as a whole did not qualify to compete in nationals, two team members did. One of those riders, junior chemical engineering major Cory Cochran of the USC Viterbi School of Engineering, finished as reserve champion — or runner up — nationwide.

Victories on the show field have propelled the team to keep working hard in the coming year.

“It validated our hard work and lit a fire within us to do even better next year,” Cisneros said. “Sharing a passion and a goal with the other girls on the team has brought us close together, and it really feels like our own little family within USC.”

Karan Menon, Ann Nguyen and Brendan Glascock make it to the final match, scheduled to be aired Sept. 7.

It’s the university’s 105th NCAA team championship and the second in three years for the women’s water polo program.