Justice has been upheld, and USC Dornsife College of Letters, Arts and Sciences faculty and students helped ensure it.

On May 19, six years after police shot and killed Mohammed Usman Chaudhry, a young man with autism, the Ninth Circuit Court of Appeals ruled that Chaudhry’s family is entitled to pre-death pain and suffering damages resulting from the violation of his civil rights.

It just cannot be the case that it is cheaper for a government official to kill someone than it is to injure that person and have effective civil rights law enforcement in this country.

The ruling overturned a previous decision by a Los Angeles district court that struck down a $1 million settlement for pre-death pain and suffering, part of an original $1.7 million damages award that included $700,000 for loss of companionship. The new ruling was based on the argument that the California state law that would bar a plaintiff’s estate from recovering pre-death pain and suffering damages in wrongful death cases cannot be applied to a federal civil rights claim when wrongful police conduct causes the death.

The precedent came after years of work by civil rights attorney Olu Orange, adjunct assistant professor of political science at USC Dornsife, and students from the USC Trial Advocacy Program.

“I am very happy that the court understood the issues involved in the case and made the decision to recognize pre-death pain and suffering damages as essential to carrying out congressional intent as to civil rights protections,” he said. “It just cannot be the case that it is cheaper for a government official to kill someone than it is to injure that person and have effective civil rights law enforcement in this country.”

A fight for justice

Orange paid tribute to the students — many of them from USC Dornsife — who participated in the USC Trial Advocacy Program and helped fight for justice for Chaudhry and his family.

“They were phenomenal. I couldn’t have gotten the job done without them,” he said. “They are people who at an early age have a passion for justice and an appreciation for the hard work that is necessary to achieve it.”

While Chaudhry’s family must wait for the trial judge to reconsider the final compensation amount to be awarded, the June 10 ruling means that the judge’s previous rejection of damages for pre-death pain and suffering based upon California state law is no longer applicable under the federal civil rights law. It also means the family can finally access the $700,000 originally awarded for loss of companionship which was frozen as a result of the appeal.

The Ninth Circuit Court of Appeals also determined that Chaudhry’s family introduced enough evidence to pursue their negligence claim against the Los Angeles County Department of Coroner after it delayed informing Chaudhry’s family of his death for 21 days.

“This ruling will force every coroner’s department to have policies and staff in place to effectively carry out timely notification of death,” Orange said. “It will change things because it makes it too expensive to be slow.”

USC’s advantages in the case

In March 2008, Chaudhry, a 21-year-old Pakistani American who sometimes wandered away from his parents’ home to sleep on the streets, was lying behind bushes near an apartment building in a Hollywood neighborhood when he was approached in pre-dawn darkness by Los Angeles Police Department officer Joseph Cruz and his partner. After an argument, in which police said Chaudhry pulled out a knife, Cruz fired four shots. Three struck Chaudhry in the chest, killing him.

Cruz was later fired from the LAPD for reasons of dishonesty unrelated to the Chaudhry shooting.

However, in an investigation into Chaudhry’s death, the LAPD defended Cruz’s actions and the five-member civilian board concluded Cruz’s decision to use deadly force against Chaudhry was justified.

Chaudhry’s family hired Orange to pursue their civil rights claims against the officer. Orange turned to USC students to help him collect enough information by canvassing neighbors for witnesses to dispel Cruz’s account of what happened that night. The lack of evidence provided by the LAPD led the team to believe there was more to the story, Orange said.

“We had two distinct advantages over the LAPD,” Orange said. “First, these were USC students and everyone loves students. And second, USC is such a multicultural, multiethnic educational institution. When we went to this primarily Eastern European neighborhood, I had students who spoke Russian and Armenian. So, while the language barrier prevented police from getting information from local people, my students were able to do so. As a result, we were successful where the LAPD was not.”

No trace of DNA

Student members of the Mock Trial Team worked for two years to uncover facts that helped a federal jury reject Cruz’s account of the shooting and conclude the LAPD officer’s actions constituted a wrongful death.

“The students uncovered evidence and found witnesses that the LAPD said essentially did not exist,” Orange said. For example, while Cruz maintained he had never met the victim prior to the shooting, one man testified that he had witnessed the police officer confront Chaudhry and call him by name on several occasions before the deadly encounter.

“Cruz’s own partner said he never saw Chaudhry attack Cruz with a knife,” Orange said. “In fact, we can be 100 percent sure that the knife was not Chaudhry’s because the LAPD’s own crime laboratory found no trace of his DNA on it.”

USC students in the Trial Advocacy Program found an auditory witness who testified that following the shots, he heard a male voice saying, “You didn’t have to do that.” The witness, a voice coach, identified that voice as belonging to Cruz’s partner.

“Based in large part on the evidence and witnesses whom the students were able to uncover, the jury came back with the finding that the city and the LAPD officer were liable for Chaudhry’s death and that the killing was done with malice — an additional finding that was extraordinary,” Orange said. 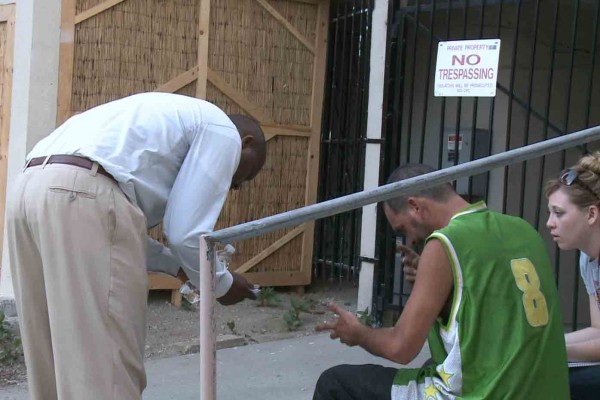 Eight members of the USC Trial Advocacy Program answered the call from Orange to help with the case. The students were motivated to volunteer their time not only for the firsthand experience, but also to advocate for a citizen whose rights they believed had been violated.

Each student played a crucial role as he or she worked to bring new information to the jury. Elvira Kras ’10, who graduated from USC Dornsife with a bachelor’s in English before attending Columbia Law School, helped put residents at ease, serving as a translator for Russian and Armenian witnesses in the area. She also conducted mock cross-examinations and ran Orange’s counsel table during the federal trial.

Team members MiRi Song ’09, who graduated with a triple major in philosophy, sociology and East Asian studies from USC Dornsife, and Sharisse Deal, a USC Annenberg School for Communication and Journalism graduate, served as clerks in Orange’s office over the summers of 2008, 2009 and 2010. These three summers were the most intensive period of investigation, as students canvassed the neighborhood where the shooting occurred, as well as every food line and homeless shelter in the area.

Song and Deal traveled to Nevada to interview a potential eyewitness. James Miao, then a senior at the USC Marshall School of Business, reviewed the county’s depositions and identified flaws in the county coroner’s policies. USC students also helped with depositions of the police officers involved, tracking down and interviewing witnesses and witness preparation.

As the federal trial date grew near, biomedical engineering major Joseph “Jack” Harding took on the task of ensuring there was available witness testimony to support every factual contention that would be offered at trial. He spent extra time in the community where the shooting occurred and would often remark, “We can’t just sit by and let them get away with killing this kid.”

Harding died before completing his degree at USC. In memory of his passion for justice, his family endowed the Jack Harding Pro Bono Advocacy Fund to support future USC Trial Advocacy Program students in public interest efforts such as the Chaudhry case.

“The experience students have with the trial advocacy program is not generally something you get until you’re in law school, but we make it available to them now,” said Orange of the program he founded in 2001.

For Kras, who plans to become a trial attorney and will begin working at an international law firm in the fall, the Chaudhry case was her first opportunity to put the knowledge and skills she had gained from the USC Trial Advocacy Program into practice.

“I have felt no greater feeling than that of helping the Chaudhry family get some justice for their son and for themselves,” she said. “I saw people who were immigrants and had come to this country with such hope and optimism, and I felt that by giving them back their voice, I was in some way also giving them back their belief in what America stands for.”