Junior Natalie Tecimer was born hearing impaired — yet she has never seen it as a disability.

“To me, hearing loss was this cool, unique thing,” said Tecimer, an international relations major at the USC Dornsife College of Letters, Arts and Sciences with a minor in children and families in urban America through the USC School of Social Work. “I had a device that was the size of a lunch box that I brought to class, and each of my teachers would wear this Britney Spears-type microphone thing to magnify their voices for me.

Looking back, Tecimer admitted that her accommodations could have made her feel embarrassed, but her parents were adamant about making it into something positive — enviable even.

“Sometimes the teacher would leave the classroom and forget to turn the microphone off, so I would still hear her through my box talking to other teachers in the hall,” Tecimer recalled. “I felt really cool because I felt like a spy. My parents would get calls from my classmates’ parents saying that their kids wanted ‘those things that Natalie has in her ears.’ ”

In 2012, Tecimer took the course “Saving Strangers Beyond Borders” from Steven Lamy, professor of international relations and vice dean for academic programs at USC Dornsife. At the start of the semester, Lamy asked the class to name groups of people whom they might support. AIDS patients, children in Africa and torture victims were some of the call outs.

On the road to nonprofit status

When it came time to form teams, Tecimer found herself alone. Lamy joined her team, and the two began devising a hypothetical organization to support hearing-impaired students. A few weeks into the class, Lamy asked her, “So, do you want to do this?” 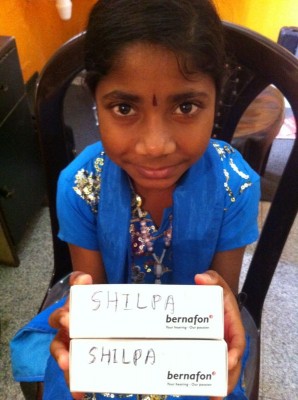 Shilpa is one of 30 children in India who received hearing aids. (Photo/courtesy of Suma Harindra)

In 2011, Tecimer’s project, Ending All Roads to Silence (EARS), became an official USC organization. A year later, EARS gained corporation status with the name getting trademarked.

In 2013, just after her sophomore year, Tecimer gained official nonprofit status for EARS. She founded the organization with fellow USC student Eli Wininger, and their team has expanded to eight USC undergraduate and graduate students. Their board of directors is comprised of Rick Friedman, division director of otology, neurotology and skull base surgery for the Keck School of Medicine of USC and her mother, Janice Tecimer.

In two years, the nonprofit has raised more than $23,000, and on April 1, donated hearing aids to 30 children in India.

“The idea was to start a transnational advocacy network to promote my attitude that hearing impairment doesn’t need to be a disability,” she said. “It just goes to show that if you really want to do something, USC has the resources to make it happen.”

Once the group had its first members as a USC organization in September 2011, Tecimer and her team began Skype-chatting with doctors from the All India Institute of Speech and Hearing in Mysore, India, and representatives from the India branch of Advanced Bionics, a global cochlear implant company.

“Even before we had funding, we were able to get a team from Advanced Bionics to Mysore to train the audiologists in the programming of the cochlear implants,” she said. “This meant that families didn’t have to drive seven or eight hours, when many of them don’t have cars, in order to have their children’s implants programmed.

However, they still needed to raise significant funds to fulfill their goal to purchase hearing aids. Through fundraising efforts and a fundraising event generously hosted by her parents at their residence in Palos Verdes Estates in December 2013 — which alone brought in $18,000 — they were able to purchase 60 hearing aids of varying power levels, as specified by the audiologist in India, to give 30 children bilateral hearing. 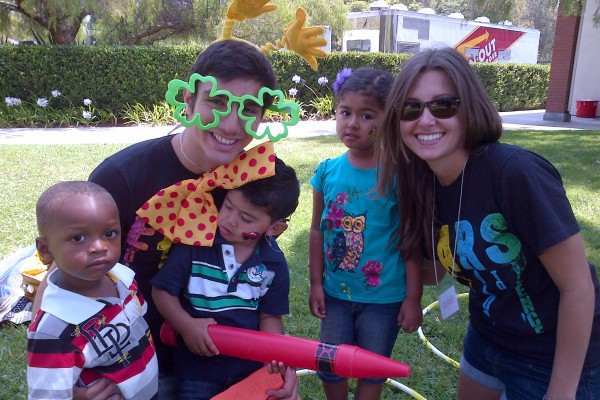 “It was so amazing to see the photos from the day the children first received their new hearing aids,” she said. The audiologist in India emailed her: “It was wonderful to see the response to the first feel of sound on their faces.”

EARS has held three benefit concerts at the Ground Zero Performance Café to raise awareness of the cause. Their slogan: “We bring sound to our audience to show how they can help others who cannot hear.”

After the first concert in 2012, Tecimer was approached by a hearing-impaired student whose musical talent inspired her to propose a music program for children with hearing impairments in the Los Angeles Unified School District.

The student and EARS volunteers created a six-week curriculum, which — after facing many bureaucratic roadblocks — was implemented at Farmdale Elementary School in the Lincoln Heights community.

“It was really about identifying sounds and building confidence and social skills in the children,” she said. “They were shy, but as soon as we gave them drums, they just went wild.”

Another objective of the program was to help youngsters identify which specific sounds they can’t hear. “I, for example, have trouble with word endings, so I know I have to be conscientious about pronouncing words fully,” Tecimer said.

What’s in her future?

In April, the organization held a service fair at USC, where Friedman and Lamy’s wife, Gayle Hopkins, a speech therapist, spoke to parents. A “fairy” entertained the kids with face painting and balloon animals. The event was a way for families with hearing impaired children to come together for a day of fun, games and education.

Looking ahead, Tecimer hopes to create a sustainable program to continue providing hearing aids for children in India and advocate for hearing-impaired youths in Los Angeles.

“I know I need to sit in the front of the classroom, and I’m comfortable asking people to speak louder when I can’t hear them. It’s so important to teach kids these self-advocacy techniques,” said Tecimer, who plans to apply to law school after she graduates in 2015.

Beyond that, Tecimer is working to impart her parents’ and her defiant positivity onto the next generation of kindergarten spies.

“I was talking to one little girl who said that her brother could be really annoying, so I told her, ‘Just turn off your hearing aids. It works every time.’ ”