Norman Levan ’39, professor emeritus and a former chief of the Department of Dermatology at the Keck School of Medicine of USC, died at his home in Bakersfield, California, on May 25. He was 98.

Levan had a long and distinguished relationship with USC that started when he enrolled as a literature major. He returned to USC to attend the Keck School of Medicine.

He served in the Army Medical Corps during World War II, before starting a practice in dermatology and joining the faculty of the Keck School. He was chair of the Department of Dermatology for 20 years, from 1961 to 1981. During that time, he established the Hansen’s Disease Clinic for leprosy at Los Angeles County+USC Medical Center. 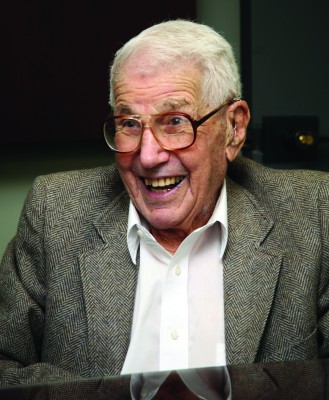 He also found a way to combine his interest in the humanities with medicine. He helped create the Keck School’s first classes in bioethics, a collaboration with a religion professor that led to required ethics classes for medical students at the school.

Levan practiced medicine for more than 70 years and was still seeing patients in Bakersfield, where he opened a practice, until his retirement in 2012.

In addition to a distinguished career in medicine, Levan was a philanthropist who focused on giving to educational institutions. He gave generously to USC, establishing the Norman E. Levan Chair in Medical Ethics and endowing the USC Levan Institute for Humanities and Ethics. He also pledged to create an endowed scholarship fund for Keck School students.

“He’s a man who is transforming the lives of countless students who will leave this university and go on to change the world,” said USC President C. L. Max Nikias at a 2011 celebration honoring Levan.

Levan also made major donations to St. John’s College, where he completed a master’s degree in liberal arts, and to Bakersfield College.