Entrepreneur and devoted USC volunteer Ramona Cappello ’81 was elected to the USC Board of Trustees on June 4. Cappello is the founder and CEO of Sun Harvest Salt LLC, the exclusive distributor of a line of natural and low-sodium sea salts. She also created Corazonas Foods, a company that makes heart-healthy snack foods.

Ramona Cappello has distinguished herself as an exceptionally creative entrepreneur.

Cappello is the outgoing president of the USC Alumni Association Board of Governors, on which she has served since 2009, and is a member of USC Associates. She received her bachelor’s degree from the USC Marshall School of Business, graduating as university valedictorian, and has served on the board of USC Marshall Partners, where she was a regional chair for two years.

“Ramona Cappello has distinguished herself as an exceptionally creative entrepreneur, as well as an extraordinary Trojan,” said USC President C. L. Max Nikias. “She stands among USC’s most passionate ambassadors and has worked diligently to foster stronger ties among members of the Trojan Family. I know the board will benefit greatly from her spirited enthusiasm and business acumen.” 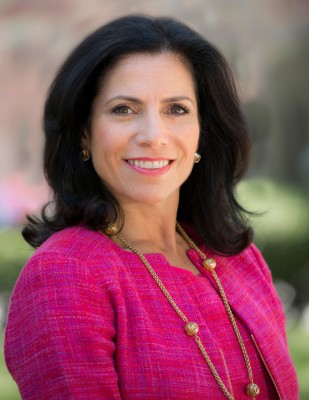 Ramona Cappello has a long history of service and leadership at the university. (Photo/Chris Shinn)

Cappello was inspired to develop Corazonas Food after losing her father and grandfathers to heart disease and witnessing her father give up his favorite foods to manage his cholesterol. Corazonas took a new approach to educating Americans about heart disease, and under her leadership, created oatmeal bars and other snacks that are infused with plant sterols, which lower levels of so-called “bad” cholesterol.

Before founding Corazonas Foods, which she recently sold, Cappello had already established a track record in the food industry. She was a senior executive with Mauna Loa Macadamia Nut Corp., where she led the company’s growth until its sale to the Hershey Co. She also held key management roles in many other food and beverage companies, including Nestlé, Celestial Seasonings and Kendall-Jackson Wineries.

Cappello follows in a long line of Trojans. Her father and uncle attended USC, as did her three brothers.

In addition to her avid volunteerism at USC, Cappello holds local and international leadership roles in the Young Presidents’ Organization and serves on the board of Catholic Big Brothers Big Sisters of Los Angeles.