Two USC Price School of Public Policy undergraduates received the USC Global Scholars designation at commencement in recognition of their academic and hands-on efforts to improve the lives of people in Ghana, South Africa and Australia.

The honor is designed to encourage undergraduate students “to become outstanding world-citizens, while preparing them to navigate our increasing interdependent community.”

[Students] see how lessons learned in the classroom can help them to stretch their boundaries.

Jessica Friedmann and Todd Nguyen, who received their Bachelor of Science degrees in policy, planning and development, were among 93 USC undergraduates selected for the honor this year. Friedmann also was one of just 10 who received a $10,000 Global Scholars Prize to pursue graduate studies.

To be considered for the Global Scholars designation, students must spend at least 10 weeks in another country as part of their undergraduate work, complete a capstone project or research paper and a reflective essay about their international experience, and graduate in no more than five years with a minimum 3.5 cumulative grade point average.

Friedmann, a native of Seattle, said her journey to international work began after serving as a program coordinator and counselor for USC Troy Camp, where she mentored and tutored young girls. 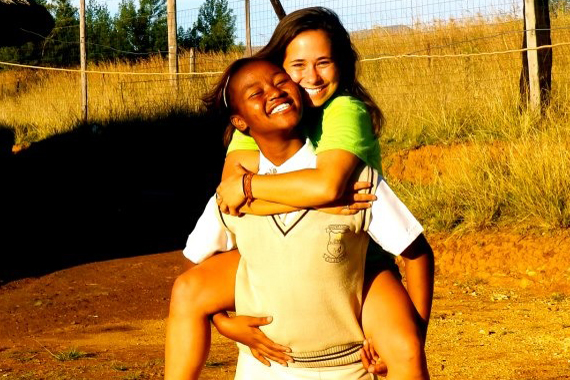 “I was able to see the impact of educational and community development policies on communities surrounding the university, and was interested in seeing that in a different context on the other side of the world,” she said.

The camp experience, together with a freshman health promotion class, led her to Ghana in 2012. There, with a USC Price Summer Research Grant, she surveyed adolescents about their knowledge of and attitudes toward HIV and interviewed the staff of clinics, schools and nongovernmental organizations about public health and youth policies to prevent HIV infection.

A year later, Friedmann was in Inzinga, South Africa, through the USC-sponsored School for International Training. During a month-long practicum there, she taught health and English in a rural South African high school and researched a paper on gender dynamics, the empowerment of adolescent girls in the school.

She pointed to several lessons from her African experiences.

“I learned that one-size-fits-all policies for HIV prevention don’t work,” she said. “I also learned that culture and individual community history are big factors in what’s effective policy formation and that it’s important to engage and empathize with communities.”

Friedmann, who hopes to work at a nonprofit organization or NGO as a social worker and youth policy advocate, plans to use her Global Scholars Prize to obtain master’s degrees in social work and public policy.

All aboard in Australia

For Nguyen, who was born and grew up in the San Fernando Valley, seeing a wide variety of cities on family trips to Asia, Europe and the Caribbean during his childhood sparked a love of urban planning.

He chose to study abroad for a semester at the University of Queensland in Brisbane, Australia. He based his decision on the university’s advanced offerings in transportation planning and Brisbane’s redevelopment efforts. Through an urban design class there, Nguyen learned of an open competition for redesign projects in the city, including the central train station.

Leading a team that included two Australian students from his urban design class, Nguyen created a new design for the station based on data the team gathered and analyzed. Their redesign plan included widening the bridge to accommodate more pedestrians and green space, as well as seating, safety and aesthetic improvements and retail options. It was one of 24 plans selected for review by the city.

According to Professor LaVonna Lewis, director of undergraduate programs at USC Price, the Global Scholars program serves as an example of the university’s commitment to undergraduate education.

“The program makes students’ professional education experiential,” she noted. “They see how lessons learned in the classroom can help them to stretch their boundaries and go to new places, allowing them to solve problems around the world.”

Lewis added, “Our academic program gets recognized because of what those who are accepted to the Global Scholars program are able to achieve with their academic training.”

In addition, several other USC Price undergraduates received designations from USC at commencement. Marta Elena Cortez-Neavel was named a Discovery Scholar for having excelled in the classroom, while demonstrating the ability to create exceptional new scholarship or artistic work. She earned the designation for her project, “The Art of Science,” which she submitted to the USC Roski School of Art and Design.

A summer in Mozambique is not usually part of the required writing class at the USC Marshall School of Business.

Working near Ghana’s capital, a USC engineering senior administers health care and forges friendships that transcend political boundaries. He hopes to recruit Trojans for a similar trip this summer.