USC Provost Elizabeth Garrett has been elected to the governing body of the American Law Institute (ALI), a prominent legal organization that promotes legal reform, produces scholarly analysis and advocates for improvements in the law.

Garrett, who was voted in at the institute’s annual meeting in Washington, D.C., on May 19, is the only university provost to currently sit on the council.

Elizabeth will be a superb addition to our council and the life of the American Law Institute.

“I am honored to serve on this distinguished council,” said Garrett, Frances R. and John J. Duggan Professor of Law, Political Science, Finance and Business Economics at the USC Gould School of Law and senior vice president for academic affairs. “ALI produces legal analysis with consequence and promotes principles of law that are influential both in legislatures and in the courts.” 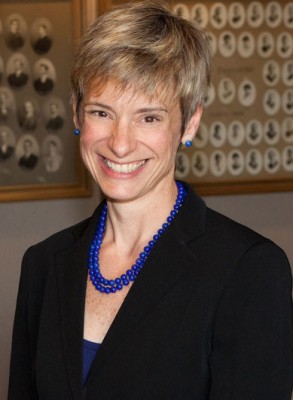 An elected member of the ALI since 2008, Garrett will serve on the council for a five-year term.

The ALI, a Philadelphia-based independent organization, prides itself on bringing together professionals from across legal realms — from lawyers and judges to legal scholars. Membership, which is by invitation, is limited to 3,000. About 60 scholars, judges and lawyers sit on the council, the institute’s governing body.

“Elizabeth will be a superb addition to our council and the life of the American Law Institute,” she said. “She is a respected legal scholar, and her experience in setting public policy and working with the president at the helm of a major academic institution will be of great value to us in many ways.”

Garrett specializes in the legislative process, direct democracy, the federal budget and tax process, the study of democratic institutions, and statutory interpretation.

Garrett clerked for Justice Thurgood Marshall on the U.S. Supreme Court after clerking for Judge Stephen Williams on the U.S. Court of Appeals for the District of Columbia Circuit. She also served as legal counsel and legislative assistant for tax, budget and welfare reform issues for then-Sen. David Boren.

Corporations once existed to benefit the public — so, what happened?