Research conducted by scientists at the Keck School of Medicine of USC shows that airliner activity at Los Angeles International Airport worsens air quality over a far larger area than previously assumed.

The study, published on May 29 in the journal Environmental Science and Technology and conducted with University of Washington researchers, found a doubling of ultrafine particle number concentrations extended east more than 10 miles downwind from the airport boundary over a 20-square-mile area, encompassing Lennox, Westmont, parts of South Los Angeles, Hawthorne and Inglewood, and, in certain wind conditions, areas south of LAX.

“Our research shows that airport impacts extend more than five times further than previously assumed,” said Scott Fruin, lead researcher and assistant professor of preventive medicine at the Keck School of Medicine. “Effects from planes that are landing appear to play a major role in this large area of impact.”

To put this large area of impact into perspective, the researchers calculated that one-quarter to one-half of the entire Los Angeles County freeway system produces an equivalent increase in ultrafine particle numbers on a concentration-weighted basis.

“LAX may be as important to LA’s air quality as the freeway system,” Fruin said. “The impact area is large, and the airport is busy most hours of the day. That makes it uniquely hard for people to avoid the effects of air pollution in affected areas.”

A previous assumption was incorrect 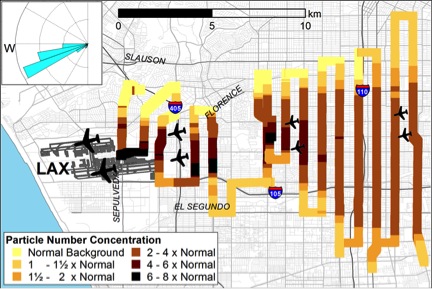 Most previous research on the air quality impacts of airports focused on measuring air quality near where jet takeoffs occur. Takeoffs produce immense plumes of exhaust but only intermittently, and pollution concentrations downwind have been observed to fall off rapidly with distance. The assumption has been that total airport impacts also fall off rapidly with distance. The new research finds that this assumption is wrong.

“Given the existing concern about the possible health effects of urban ultrafine particle levels, living in an area with two to four times the average LA levels of ultrafine particles is of high public health concern,” said first author Neelakshi Hudda, research associate in preventive medicine at the Keck School.

The research team used vehicles equipped with special measurement devices to capture data not available using traditional fixed monitors. The team was able to take moving measurements for more than five hours under consistent wind conditions to fully capture the extent of the impact boundaries.

“Other airports generally have less steady wind directions, which would make these measurements more difficult,” Hudda said. “Similar impacts are probably happening, but their location likely shifts more rapidly than in Los Angeles.”

“The on-shore westerly winds cause this impact regularly in communities east of LAX because the impact’s location corresponds to the wind direction,” Hudda added. “In the winter months, when the winds were different, impacts were measured south of the airport during northerly winds.

The research was funded by the National Institute of Environmental Health Sciences.

Girls may be at higher risk for ill effects than boys.