Justin Wood, assistant professor of psychology at the USC Dornsife College of Letters, Arts and Sciences, is interested in how humans and other animals learn to understand the world. His research, which examines the origins of knowledge by testing how cognition emerges in the newborn brain, has earned a National Science Foundation (NSF) CAREER award.

The award is the foundation’s most prestigious honor in support of the early career/development activities of teacher-scholars who most effectively integrate research and education.

Addressing the question of how early experience shapes the processing and interpretation of visual information, Wood examines how newborns learn to recognize objects, faces, actions, numbers and scenes.

“As adults, we recognize objects so effortlessly that it is easy to overlook what an impressive feat this represents,” Wood said. “We have this intuition that the brain recognizes objects by storing pictures in our head. But in reality, the brain is doing something much more complex, taking the picture on the eye and transforming the image into abstract representations of objects.

“These abstract representations are incredibly powerful and can be used to recognize objects across changes in the object’s appearance, due to changes in the object’s size, viewpoint, illumination and so on. The goal of this grant is to understand how the brain learns to build these abstract representations, which is one of the great mysteries in psychology and neuroscience.”

Since newborn humans cannot be raised in controlled environments from birth and have limited motor abilities, it is impossible to answer these questions using human babies. Instead, newly hatched chicks, which have similar visual cognitive skills as humans, provide an ideal animal model for studying how visual cognition emerges in the newborn brain.

The NSF award, which provides Wood with a $559,000 grant, will allow him to study the earliest stages of visual cognition using a two-pronged approach.

First, Wood will perform a series of experiments examining how visual cognitive abilities develop in animals raised in different visual worlds. For example, Wood will examine how object recognition develops when a chick is raised in a world that contains a single virtual object.

The findings will provide the foundation for a new, publicly accessible database for advancing the study of newborn cognition. This will be the first database to provide systematic descriptions of how specific visual experiences shape the initial state of the newborn visual system.

Second, Wood and his team will build computer models designed to work the same way as the newborn visual system, using state-of-the-art techniques from artificial intelligence. 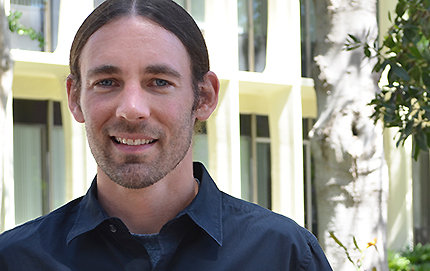 “This work is exciting because it links diverse fields with one another, including developmental psychology, vision science, computational neuroscience and artificial intelligence, providing a unified framework for studying the development of the mind,” he said.

Possible applications for this research include the development of new technology, which could be used to help the blind.

“Once we understand how visual cognition emerges in the newborn brain, it will be possible to build artificial visual systems that work in a similar way.”

“This virtual reality approach with newborn animals is a major innovation,” Wood said. “It took my lab four years to develop the technique and build the lab, and we faced many stumbling blocks along the way. It’s very exciting to have finally figured it out. And thanks to the NSF award, we have five years of funding to see where this new method can take us.”

In Wood’s experiments, chicks are hatched in darkness and then raised within “virtual reality chambers,” which have flat-panel display monitors for walls. The monitors display a continuous stream of videos of objects rotating and moving, creating an immersive visual world for the subject.

“The virtual reality chambers allow us to raise chicks in precisely controlled visual worlds. We then examine how those different visual worlds shape the chicks’ visual cognitive abilities.”

So far, the results show that chicks develop object and face recognition within the first few days of life, even if they’ve been raised in a world that contains just a single virtual object or face.

“Our research shows that newborn animals have powerful visual cognitive abilities,” Wood said. “For example, they can build an abstract representation of the first object and face they see in their life. By ‘abstract representation,’ we mean that the object can be recognized even when its appearance on the eye changes, such as when the object is seen from a novel viewpoint. This suggests that natural selection designed newborn visual systems to begin building abstract representations at the onset of visual experience.”

Wood, who is from Northern California, earned his bachelor’s in psychology from the University of Virginia and his master’s and PhD from Harvard University. He joined USC Dornsife in 2008. He was the recipient of a USC Excellence in Teaching Award for General Education (2010-11) and a New Investigator Award from the American Psychological Association (2007-08).

“For me, the most interesting questions are ‘What are the origins of the mind? How does the newborn brain transform noisy and ambiguous sensory input into coherent and abstract representations of objects and people?’ ”

Link Found Between Fitness and Cognition

In the first study to demonstrate a clear positive association between adolescent fitness and adult cognitive performance, Nancy Pedersen of USC and colleagues in Sweden find that better cardiovascular health among teenage boys correlates to higher scores on a range of intelligence tests – and more education and income later in life.

A team of researchers that includes a USC scientist methodically has demonstrated that a face’s features or constituents – more than the face per se – are the key to recognizing a person.